Joe Schmidt was obviously playing it down but CJ Stander may be out of action for a while.

Saturday evening at the Aviva Stadium and CJ Stander poured it all out for the Irish cause again.

The Munster back-row made 11 carries and 17 tackles, as well as hitting in excess of 20 rucks, on a chastening night for Ireland. The 2018 Grand Slam champions were blitzed by England and - despite beating 26 defenders as opposed to England's 13, and gaining more penalties - they were well beaten.

Stander, Josh van der Flier and Peter O'Mahony combined for 25 carries on the night, for a metres gained return of 9. It was that kind of a night.

Stander made numerous hard carries in tight situations and drew in several defenders but he rarely got a chance to open up his legs and do some damage on carries. This would be no repeat of Twickenham, last March, where he dove to score at the base of the English posts after a smart Irish set-play between Tadhg Furlong and Bundee Aki.

Ireland's No.8 lasted 63 minutes before he was replaced by Sean O'Brien. It was not his best performance in green but he can have nothing to be ashamed of. We gave him a 7/10 in our player ratings.

Following the game, there was talk of Stander dislocating his jaw but Ireland head coach Joe Schmidt hedged his bets, saying:

"CJ Stander, we think has a facial injury, he's gone for a scan."

Before he did go for that scan, Stander caught up with his wife, Jean Marie, and his brother in law, Ryk Neethling. The former Olympic gold medal swimmer for South Africa shared this picture in front of the team bus after the game.

END_OF_DOCUMENT_TOKEN_TO_BE_REPLACED

Two fractures to his cheek and eye socket. He did have a fierce collision with the forearm of England centre Henry Slade in the first half and that is when some of the damage could have been sustained.

Incredible to consider that Stander played on through that sort of damage and pain. His left cheek certainly looks to be swollen from the picture Neethling posted: 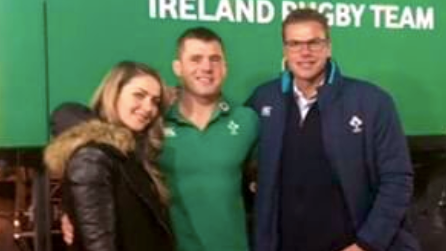 And still he kept taking into contact. Unbelievable grit from the big man. Please pass on our best for a speedy recovery and hope you enjoy the rest of the evening.

Some man !! And he kept going back for more !! A true gladiator!! Give him our best from a Munster man in exile in Kilkenny and my 3 monkeys Alowen , Robyn and Tegan

If he is out of action for the Scotland game next Saturday, at least, Ireland could call upon Jack Conan or O'Brien to step in at No.8.