Ulsterman is the convenient fall guy.

Let's get this out here at the start - Luke Marshall was hauled to the ground by his face in a rash tackle by Chris Ashton.

This afternoon, Ashton was hit with a 10-week ban for 'making contact with the eye area' of Marshall. Cynics would call it a gouge but, if anything, it was pure recklessness from Ashton.

While attempting to prevent a choke tackle on his Saracens teammate, Ashton grabbed a scruff of Marshall and got to work. We're sure it was never his intention to rake Marshall's eyes but that is what he did. 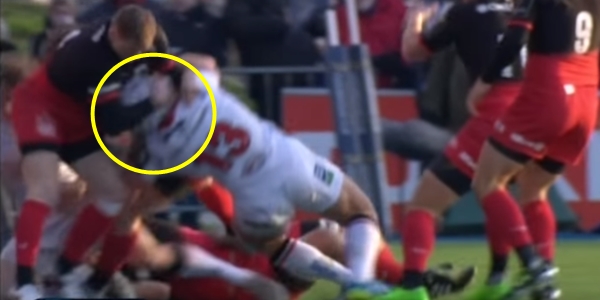 The ban means Ashton will now miss the entire Six Nations, including a February 27 clash with Ireland at Twickenham.

There was a mixed reaction to the ban on Twitter:

@thepaulwilliams @gallagherbren agree. Will @lukemarshall121 appear in panto soon. I fear 'playing the ref' is taking on a different meaning

Can't believe @ChrisAshton1 has been given a 10 week ban!! What has the game come to???#shockingdecision

10 weeks for Ashton? For that? What a shocker. I'm no referee l, thankfully, but I wouldn't even give that a yellow.

Sympathy from an Ulsterman

@Sonjamclaughlan as an Ulsterman it's a ridiculous ban. No idea who makes these ludicrous decisions nor the thought behind them sometimes.

Chris Ashton is such an idiot. Get your first call-up for England in god knows how long and then decides to fiddle with someone's eyeball.


popular
CCCC order replay of All-Ireland club football final
Shane Lowry confirms amicable split from caddie after four and a half year partnership
January transfer window 2023: Follow the latest updates live in our hub
Owen Farrell praises Johnny Sexton in revealing interview ahead of Six Nations
British publication urges Gareth Southgate to claim Evan Ferguson for England
"It's crazy to think Bundee Aki might come straight in and start against Wales"
Two Ireland stars included in Premier League's 'young English XI'
You may also like
6 years ago
English players' union lashes out at World Rugby over Joe Marler 'gypsy boy' hearing
6 years ago
Billy Vunipola makes preposterous statement about southern hemisphere rugby
6 years ago
Conor O'Shea has been confirmed as Italy's new head coach
6 years ago
Is it time for the Six Nations to introduce a bonus point system?
6 years ago
Ranking the best and worst of Ireland's Six Nations performers
6 years ago
Even Keith Earls is impressed with CJ Stander's passion for the Irish cause
Next Page