The rules seem to be getting made up as we go along.

The Heineken Champions Cup returns, this weekend, and, as of today, all fixtures in round three of the pool stages are set to go ahead. The waters are calm, for now.

Montpellier have been dealing with a Covid outbreak in and around their senior squad but their weekend clash with Leinster is still slated for Sunday afternoon.

END_OF_DOCUMENT_TOKEN_TO_BE_REPLACED

Back in December, fresh off their opening win over Bath, Leinster themselves were hit by a raft of positive Covid cases. Leo Cullen was still able to name a 23-man match-day squad, and the team received medical clearance from the Irish government to play. Still, the EPCR awarded the tie as a 28-0 win to Montpellier.

On the same week, Ospreys informed the tournament organisers they could not put a match-day squad out against Racing 92, in Paris, and the French side were also awarded a 28-0 result and the five bonus points that came with it.

Then, further muddying the already murky waters, the French government stepped in to prevent travel for any English teams into their country and also stopped their Top 14 sides from travelling to the UK. The EPCR postponed those games but a fixture back-log now looks likely to see a compromise that will rub many clubs, and fans, the wrong way. 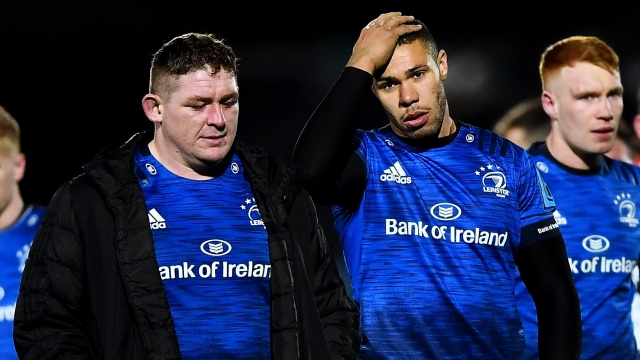 Hopes for Leinster and Ospreys' matches being played look slim

END_OF_DOCUMENT_TOKEN_TO_BE_REPLACED

The Champions Cup and Challenge Cup games from round two of the pool stages now look to be all placed in the record books as draws, and will not be played at a later date.

It has been reported in The Times that all seven postponed games from last month - five in the Champions Cup and two in the Challenge Cup - are set to be recorded as 0-0 draws, with both sides being awarded two points. Here are the seven matches:

With those postponed games set to be squared off in the official record books, the hopes of Leinster and Ospreys to play their games against Montpellier and Racing 92 appear to have been snuffed out.

Sale and La Rochelle are both in Pool A with Leinster. Were they to get the two points awarded, Leinster would drop to seventh in the standings after two rounds of pool matches. Connacht would drop from fourth to sixth in Pool B if Toulouse and Bristol are awarded two points.

Official confirmation should arrive before this weekend's games, but it should be noted that there is uncertainty over those involving teams from the UK and France again. Several English clubs, for example, have expressed concerns over strict French Covid protocols and isolation periods required when travelling to play there.


popular
Argentina reach World Cup last-16 with convincing win over Poland
"Nowadays, even if I don't hit a ball, I don't care as long as we win" - Gleeson learning from the past
Iran demand action by FIFA after USA team change flag on social media
World Cup 2022 Day 11: All the major action and talking points
Thibaut Courtois warns teammates after leaks emerge from Belgium camp
Cristiano Ronaldo 'agrees £173m-a-year deal' with Saudi club
Ronaldo finally reveals why he got that hideous haircut
You may also like
1 week ago
"Two Irish players are best in the world" - Rugby reacts to big Josh van der Flier and Terry Kennedy awards
1 week ago
Two baffling omissions as four Ireland stars make World Rugby 'Dream Team' of the Year
1 week ago
Josh van der Flier claims World Rugby Player of the Year at Monaco ceremony
1 week ago
"Highlight of my Ireland career" - Behind the scenes as Jack Crowley and Ross Byrne covered for a legend
1 week ago
Bundee Aki reminded us all of his best qualities, on a night Ireland couldn't do without him
1 week ago
Peter O'Mahony delivered some fitting Jack Crowley comments after surprise Test start
Next Page