Whenever you think you are well stocked, life (or injuries) come up with other plans.

Ahead of the Christmas, new Ireland head coach Andy Farrell called in 45 players for a 24-hour gathering at the IRFU's new High Performance Centre. Three young back rows from Leinster were all given a taste of the big time while Caelan Doris is being tipped for a Six Nations role.

With Tadhg Beirne (ankle) out injured, the following back rowers were included:

Seven included while the likes of Jordi Murphy, Jack O'Donoghue, Paul Boyle, Nick Timoney, Tommy O'Donnell and Sean Reidy all missed out. It looks, once again, like Ireland is well stocked in that department. That was what we all thought this time last year but Ireland went to the World Cup short at openside and No.8 after losing Dan Leavy (knee) and Sean O'Brien (hip) before Jack Conan (foot) lasted just one game.

At that World Cup, England provided an enticing template of how to go about modern Test rugby/warfare. The English back row was Tom Curry (21) and Sam Underhill (23) laying waste with their infectious energy and Billy Vunipola (27) making some big plays from No.8.

In Connors and Deegan, Farrell called in two 23-year-olds, but it is 21-year-old Doris that is being tipped for a big role in the upcoming Guinness Six Nations.

On the latest episode of Baz & Andrew's House of Rugby [from 23:00 below], Barry Murphy, Andrew Trimble and Jerry Flannery discussed the leading candidates to break into Ireland's back row. 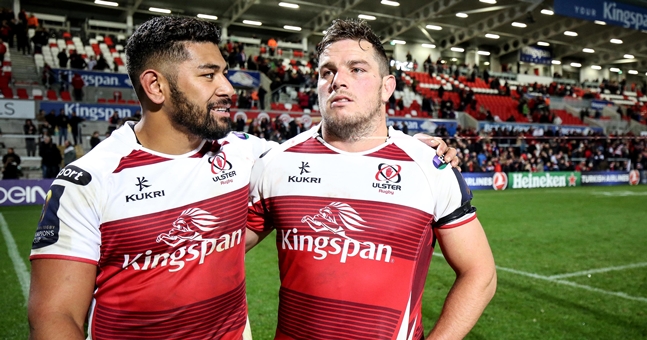 END_OF_DOCUMENT_TOKEN_TO_BE_REPLACED

"Jack O'Donoghue is not in the squad and neither is Sean Reidy," says Trimble. "Neither is Matty Rea, who is going really well. These guys are not even getting in the enormous, 45-man squad. It's tough for Sean Reidy especially, as he's been playing class for Ulster."

"Reidy is physical," notes Flannery, "but I'm trying to see what his point of difference is, though. I can see that he is one of the better ball-carriers in the Ulster pack but when I look at someone like Jack O'Donoghue, he gives you almost like a Pete O'Mahony-esque presence in the lineout, attack and defence, and he's a brilliant maul stopper and he's a good athlete around the field.

"But Jack's best position is probably at 8 and when you look at it, there's CJ, Caelan Doris and Max Deegan, so there's a lot of competition there. Jack Conan, even, when he gets fit again."

"I'd have Doris in there [ahead of Deegan]. Deegan has excellent as well, but I think Doris has to play international rugby sooner rather than later. He just looks that bit more comfortable.

"When I was looking at Leinster's back row and what they each bring - they have van der Flier's line-speed, the have Leavy's all-round abilities as a 7 but he's a real poach threat, you have Connors' massive work-rate and dominant tackles. Then you have Doris and Deegan both at8 - two fantastic footballers. And then at 6 you have Ruddock's ability to carry into four or five bodies and still make gainline. You can throw Scott Fardy in there too and Jack Conan, who is so explosive, when he comes back. They've just so many."

When it comes to that first matchday squad Andy Farrell names ahead of the Guinness Six Nations opener with Scotland, Flannery notes that the World Cup quarter final back row of O'Mahony-van der Flier-Stander will be strongly considered. Still, he would like to see Doris in the matchday 23 and pushing for a starting role.

popular
You'll have to be a diehard fan to get 20/20 in this Liverpool players of the 90s quiz
QUIZ: You have 30 seconds to answer this one tricky football question
The SportsJOE 12 o'clock quiz | Day 286
SportsJOE 2000s Football Quiz | Round 11
Here's a list of 23 people who own a greater share of the UFC than Conor McGregor
Wayne Rooney story about Memphis Depay shows why he failed at Manchester United
If Twitter was around for 1994 Hurler of the Year farce, it would have been pure carnage
You may also like
2 weeks ago
Praise for Connacht's big win and Ulster's emerging talents on House of Rugby
4 weeks ago
Marcell Coetzee tells House of Rugby about his vow to Ulster
1 month ago
Visit Vodafone’s Pop-Up Shop at JOE with heaps of offers on smartphones, smartwatches and more
1 month ago
"If you don't have a seat at the table, you're probably the one being eaten"
1 month ago
Dan Leo joins House of Rugby Ireland to discuss his acclaimed Oceans Apart documentary
1 month ago
Caelan Doris backed for Lions despite England's expected Test XV domination
Next Page