"The way he's played has been just brilliant."

Caelan Doris would have definitely been in contention for a British & Irish Lions spot were it not for concussion and a calf injury that meant he did not return to action in May of this year, after Warren Gatland's squad was announced.

Having been backed by current players and rugby pundits, the Leinster back-row focused, instead, on making an impression with Ireland. He started their two summer games and got the blindside nod for Ireland's wins over Japan and New Zealand. When Jack Conan missed out on the Argentina game, Doris slotted into the No.8 jersey, was brilliant again and got his second Test try in eight days.

"Caelan is only young in his international career, the same as Hugo Keenan, etcetera," Ireland head coach Andy Farrell reflected, "but they're learning how to prepare better and learning how to get the best out of themselves and their team-mates throughout the week.

"It looks like he's been around for a long time and he's certainly playing with maturity because he's starting to get what it takes, as far as preparation is concerned, to be a top-class international player."

On the latest House of Rugby episode [LISTEN from 11:40 below], hosts Seán O'Brien and Alex Goode reflected on the Autumn Nations Series and selected their best players from the past month of action. 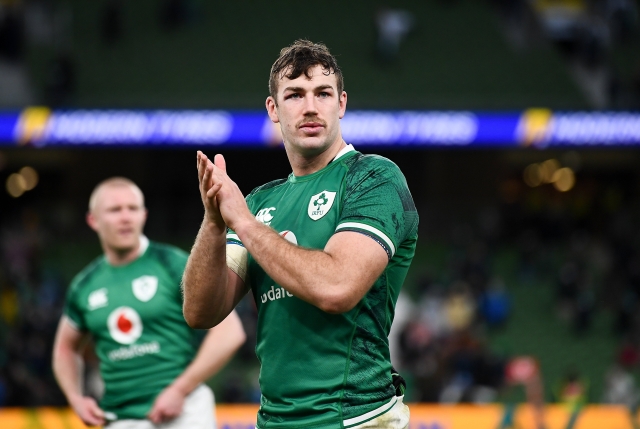 Caelan Doris pictured at the Aviva Stadium after Ireland's victory over Argentina. (Photo by Harry Murphy/Sportsfile)

END_OF_DOCUMENT_TOKEN_TO_BE_REPLACED

Looking back on the 2021 Autumn Nations Series, Seán O'Brien marvelled about France scrumhalf Antoine Dupont, who is favourite to win World Rugby Player of the Year.

"Dupont, what a player," he declared. "He's outrageous, at the minute... his level is untouchable. There's no-one getting near him. He's top of the pile, for me."

In discussing the players that impressed them most, Alex Goode went first and had a certain Ireland forward in mind. The Saracens and England star commented:

"For me, the player of this autumn was Caelan Doris. I'd say that not many people would have named him as a household name, beforehand. He's new enough to the international scene, and the way he's played has been just brilliant.

"He's come into the Leinster and Ireland set-up and just gone up, and up, and up. He had someone [Seán O'Brien] in his way that was taking his time to retire and getting in his way! And look how well he's doing now." 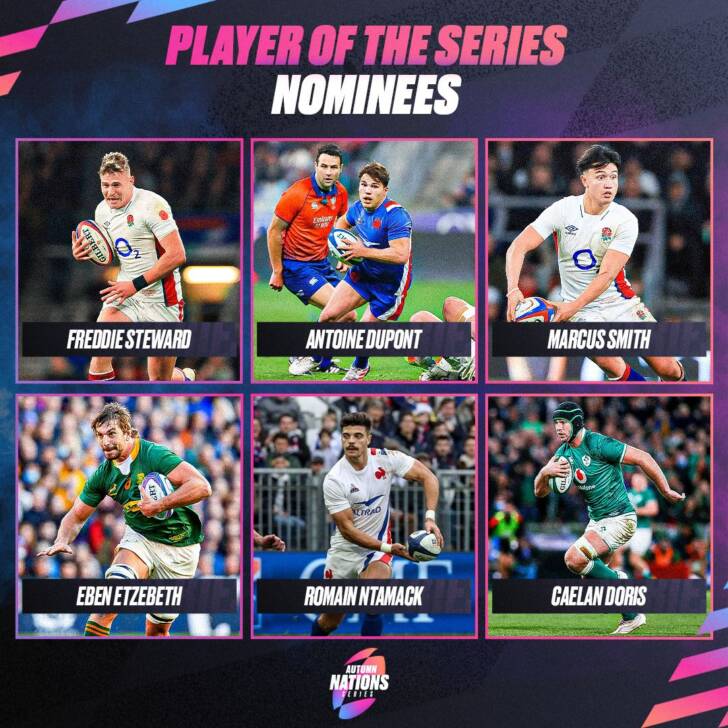 O'Brien, who left Leinster for London Irish in 2019, agrees that Doris has been "phenomenal". He named a few other players, aside from Dupont, that impressed him during the Test window. "I thought Garry Ringrose was unbelievable," he said. "Romain Ntamack, as well."

"If I was to go for a guy that has most impressed me, though, I'd probably pick [Wales flanker] Taine Basham. I knew what Caelan was about and it was just a matter of time, once he came on to the scene, like he has at this international level over the last few weeks against the bigger teams."

"Basham, for me," he added, "because he's almost come out of nowhere and now he's an international players at a very high level. He's someone that's going to be very important for Wales."


popular
Ireland team to play Wales: Andy Farrell's XV, the big calls and bold cuts
Ireland's self destructive mentality kills Croke Park fight for Katie Taylor
Roy Keane reminds everyone of his feelings towards Newcastle United ahead of cup final against Man United
Everton release brutal 59-word statement to confirm Anthony Gordon departure
Even Roy Keane felt Michael Dawson went too far with his remark to Tom Heaton
Five confirmed changes and guidelines to have big impact on 2023 Six Nations
Owen Farrell praises Johnny Sexton in revealing interview ahead of Six Nations
You may also like
14 hours ago
Ireland's self destructive mentality kills Croke Park fight for Katie Taylor
2 days ago
"I've heard people tipping Wales to beat us. I was actually offended!" - Greg O'Shea
2 days ago
"It's crazy to think Bundee Aki might come straight in and start against Wales"
4 days ago
Two Ireland stars included in Premier League's 'young English XI'
4 days ago
British publication urges Gareth Southgate to claim Evan Ferguson for England
1 week ago
The two toughest calls in Ireland team to face Wales are in the backline
Next Page