Bundee Aki and an apology I'm happy to make

The Connacht centre has bounced back from those dual set-backs incredibly well.

Bundee Aki was not the only Ireland player to return from the 2019 World Cup with a raw hurt that would take some time to subside.

Aki went into that tournament with a lot riding on how he performed in the Irish midfield. Having started 10 of Ireland's 11 games in their Grand Slam-winning, Team of the Year 2018, Aki was key to Joe Schmidt's plans.

END_OF_DOCUMENT_TOKEN_TO_BE_REPLACED

He started the win over Scotland but missed the defeat to Japan, only to return for the win over Russia. He retained the 12 jersey for the final pool game against Samoa but a red card in that contest saw him miss the quarter-final against New Zealand. Ireland got savaged in that game and his World Cup was over. 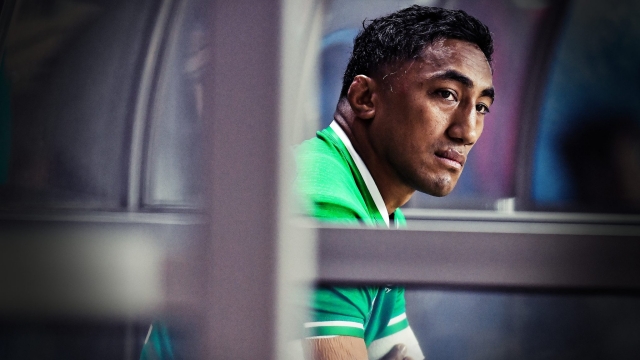 Aki started all of Ireland's games in the disrupted 2020 Six Nations but found himself playing back-up to Robbie Henshaw and Garry Ringrose in this year's staging of the tournament. He got his chance when Ringrose was ruled out of their final game against England and was looking good until he received another red card for a high tackle on Billy Vunipola.

END_OF_DOCUMENT_TOKEN_TO_BE_REPLACED

I remember watching him trudge off the Aviva Stadium pitch having got his tackle technique all wrong again. Henshaw and Ringrose were being favoured by Andy Farrell. Players like Chris Farrell and Stuart McCloskey, Ciarán Frawley, Conor O'Brien and Will Addison were on the radar too. Aki was a couple of weeks away from turning 31.

Perhaps caught up in the moment - Aki's red threatening to give England a lifeline - I wondered whether that could be it for Aki.

Shame, as he was doing really well up until that point. England bench did their job well - screaming in horror at each replay

END_OF_DOCUMENT_TOKEN_TO_BE_REPLACED

Luckily for Aki, Ireland rallied well with 14 men and closed out a brilliant win that has revitalised them. The centre picked up a four-match ban and did not play again for Connacht until the final two games of the 2020/21 season. By then, he had already been named in the British & Irish Lions squad to tour South Africa.

It was a Warren Gatland selection that took many by surprise. It was certainly worth debating whether Aki should have travelled to South Africa instead of players such as Henry Slade or Garry Ringrose, but the Connacht man did not deserve Stuart Barnes saying he was the '37th worst rated' in the squad.

After impressing in his Lions warm-up outings, Aki looked back on that red card against England and spoke well on learning from such lows:

"The red card was unfortunate. When it happened, I was disappointed about it but it’s part of rugby. Obviously, they’re putting in those safer rules for people’s safety which is very good... There is a fine line. You’ve just got to make sure you keep working week-in, week out. I do it all the time. Obviously I came on the short end of the straw that time but it’s a constant work-on, it’s a constant thing that has to be done every week. It’s all marginal and I’ve just got to make sure it’s the right marginals and not the wrong end of it."

Such was Aki's form in South Africa that some were then quizzing Gatland on why he was not involved in the match-day squads for the First and Second Tests. He started the Third Test and was very impressive in the Lions' agonising 19-16 defeat that ultimately saw the Springboks claim the series.

Profoundly wide of the mark.

And though Aki only had a chance to play once for Connacht [so far] this season, there was no doubt Aki would be in Andy Farrell's Autumn Nations Series squad. Chris Farrell, Tom Farrell and Will Addison were all injured, but none would have jumped the line.

With Robbie Henshaw still trying to get back to full fitness, Andy Farrell has gone back to the Aki-Ringrose midfield partnership that both he and Schmidt have built their backlines around so many times.

Aki started against Japan - proving my theory to be profoundly wide of the mark - and he put in an electric performance. 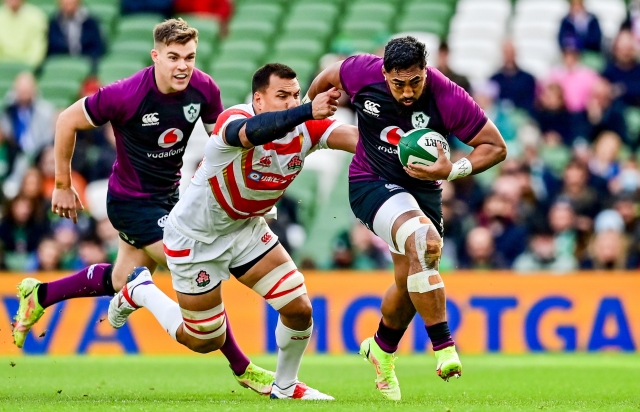 Bundee Aki in action against Ben Gunter of Japan during the Autumn Nations Series. (Photo by Brendan Moran/Sportsfile)

The 31-year-old punched through the Japanese lines with menacing intent in the opening 20 minutes. He made two big carries that got Ireland steaming forward and led to tries for James Lowe and Andrew Conway.

He ended with 33 metres gained off 10 carries with a couple of nice offloads in there and a second-half try scored over on the right-wing.

Next Saturday, New Zealand are back in Dublin and Ireland have another 2019 World Cup revenge mission, this time against the altogether tougher All Blacks.

Farrell will turn, once again, to Aki and Ringrose. Both were immense in that November 2018 victory over New Zealand, in Dublin.

Just as I was today, I'll be more than happy if Aki goes out there and proves me wrong all over again. And again after that.


popular
Southampton pay tribute as Shane Long leaves the club after eight years
Get him a tuxedo, give him the All-Star and for crying out loud, someone bring that man out to America
Fans react to Tottenham Hotspur's 'brilliant tease' for Richarlison signing
Tiernan Kelly and three other players hit with ban following tunnel brawl
Mohamed Salah signs new long-term contract with Liverpool
The four stone-cold certainties for All-Stars even as early as this
QUIZ: How well do you know Manchester United players of the 2000s?
You may also like
1 day ago
Your guide to an incredible weekend of sport and how to stream it all
2 days ago
Gavin Coombes one of four Irish players to push themselves into Test picture
2 days ago
Bundee Aki understandably emotional, as Ireland pay moving tribute to late Sean Wainui
2 days ago
Full Ireland player ratings after Maori All Blacks teach us an early lesson
3 days ago
"We could lose all five games" - Darren Cave with a rare take on Ireland's chances
3 days ago
Mike Lowry and Peter O'Mahony in First Test contention as Ireland shuffle deck
Next Page