"It was no holds barred. We just went at one another."

When you ask both men about that Second Test between the British & Irish Lions and South Africa, in June 2009, Brian O'Driscoll and Victor Matfield both grin. It is a game neither will forget.

Today, in Cape Town, the Lions and South Africa will duke it out in the Second Test of the 2021 tour. Warren Gatland's Lions are 1-0 up and have a chance to do what the Boks did, 12 years ago. They can close out the series with a game to spare.

2-0 after two games did not do justice to the razor-thin margins in that 2009 series. The Lions were on the rocks in the First Test before rallying with three tries to bloody the Boks' nose. For the Lions, it was all-or-nothing. 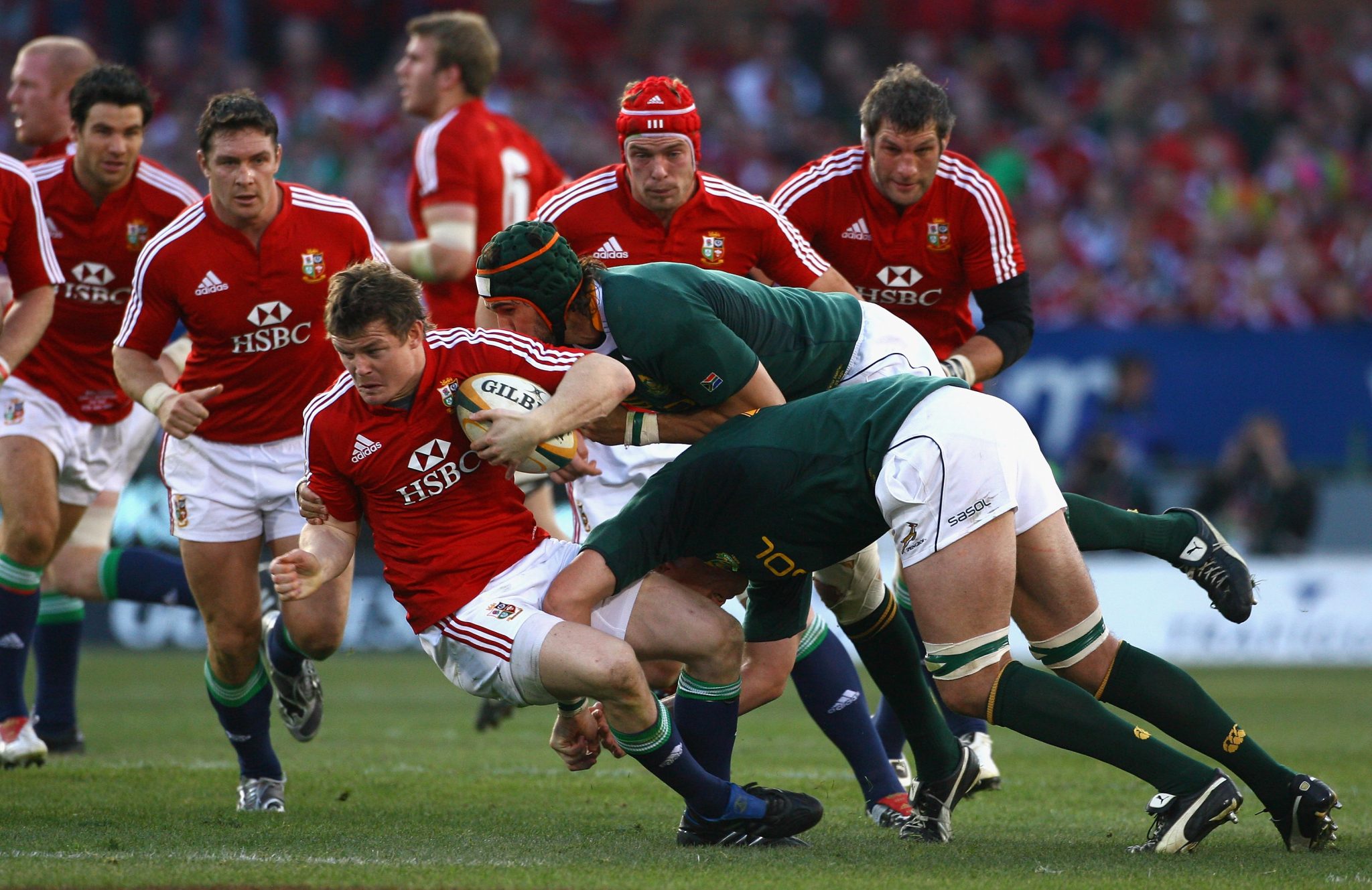 The South Africans, on the brink of avenging the 1997 series loss, were amped up to the nines.

END_OF_DOCUMENT_TOKEN_TO_BE_REPLACED

"I must say, I think that was so funny, going into the Second Test, we were so charged up. I don’t know why but there was something in the week that Brian said, and I was just… I said, ‘There’s no chance. The guy is just getting away with everything’."

"So many people talk about Lions Test matches and their memories and you see, so often, they choose that one, even though the Lions lost it in the dying moments. People think about the ferocity of it, and they’re right. It was really, really ferocious. But it was Test match rugby at its’ best. It was gladiatorial, and I think that’s why people love the sport, because it was no holds barred, we just went at one another."

END_OF_DOCUMENT_TOKEN_TO_BE_REPLACED

"We knew the Second Test was going to be hard. The main focus was more of the same for us. So, obviously, dominate the set-pieces and physicality is non-negotiable. That would be the Lions team-talk. All about physicality.

"So, my 50th Test cap, a lot happening, family is up there. It was just one of those moments where, if you look back now, eye-gouge 10 seconds in… not even, five seconds into the game, Luke Fitzgerald. What was he doing in the ruck, by the way? I’m just joking." 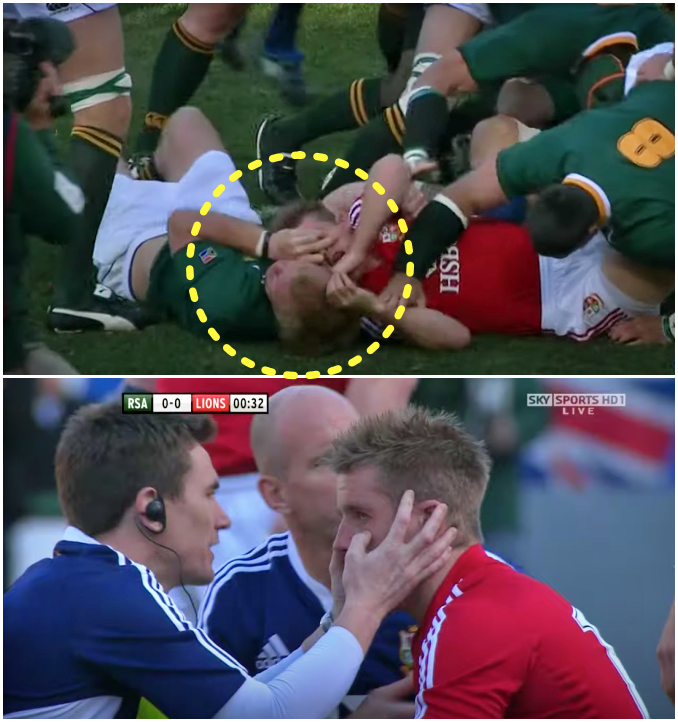 "In all seriousness, you know, I mean... stupid. You get things wrong.

"And, again, if you look back now it’s an over-hyped moment. Probably got a little bit too big. Because they made me laugh – where you’re going to enter the game and think, ‘Sh*t, I’m going to eye gouge someone’.

"You just over-step the mark through too much build-up, you want to make too big an impact, too soon. You know, these things happen."

The Lions did take advantage of the Springboks being reduced to 14 men. Stephen Jones kicked the resulting penalty and the Lions were 10-0 up after eight minutes when Rob Kearney's superb try was converted by the Welsh outhalf.

J.P Pietersen got over for a try that made it 10-5 but Jones added two more penalties to give the tourists an 11-point lead. The Lions scrum - having been annihilated the previous weekend - were turning the screw on the Boks. Adam Jones, in for Phil Vickery at tighthead, was making the difference.

Amid the white-heat of battle, there was still room for slagging, and for laughs...

"I remember [Lions scrumhalf] Mike Phillips looking up and he was talking about Bakkies Botha, Pierre Spies and Schalk Burger and he said, ‘Are you guys on steroids?’

"And Bakkies just looked at him and said, ‘I love your beautiful blue eyes!’  The only thing he came back to Mike Phillips with. He had a thing for scrumhalves, Bakkies!" 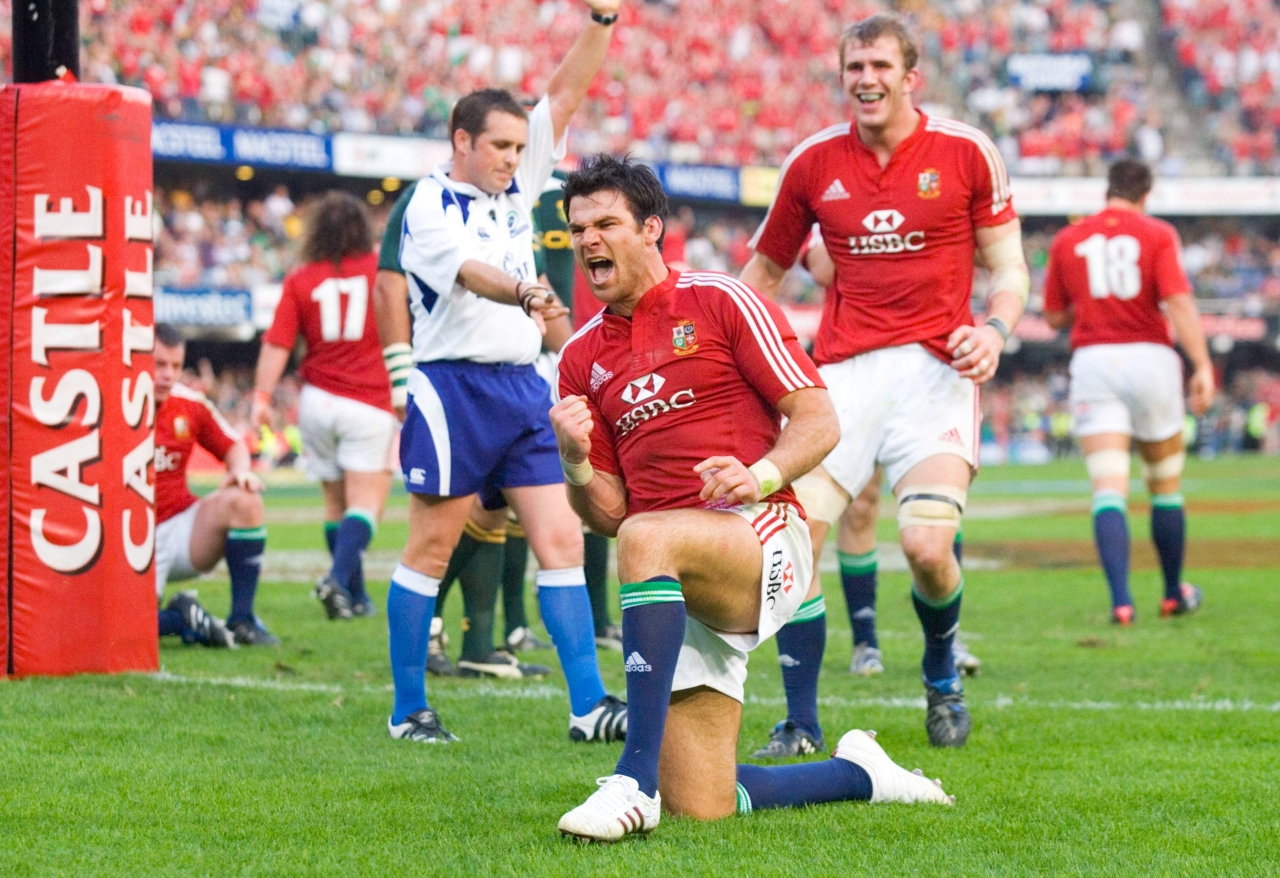 A Frans Steyn penalty, just on half-time, made it 16-8 to the Springboks. It was all in the mixer for what would prove to be one of the most brutal and impacting second halves since the game had turned professional.

"You know what? Sometimes, I think you can look on things in lots of different ways. When you know that’s happening, you… I don’t know if it changes your psyche.

"I think you look forward to it and almost take on the challenge. You want to make sure that your footwork is good on days like that, so you don’t get lined up and you don’t find yourself in a vulnerable position.

"But these days, and even going back 10 years, there’s so many camera angles and there’s very little off the ball stuff that people get away with any more, which is right, but it doesn’t mean that you can’t physically impose yourself on an individual. If you get the opportunity to throw your shot at them, you’ve got to give it everything."

Less than five minutes into the second half, with the Lions still eight clear, Adam Jones was taken out of the contest with a fearsome clean-out.

"If you look at Bakkies Botha’s career over the years, if they went back to the slow-mo, the amount of… we call it head-cleans. Where he cleans guys but he makes contact with his head, straight to the face of the other guys. He could have been suspended every game. He was looking for that the whole time.

"If you look at that clean on Jones, when he had to go off, the force that Bakkies went into that breakdown was quite something."

Jones left the field of play with a fracture to his wrist, Botha remained on and play continued.

"That game itself was just barbaric. There were lads falling left, right and centre.

"There were a few times in your career when you’re just happy to be a fullback at at the very back of the field, and let all the other 14 players in front of you just do the tackling. That was definitely one of those games. I was like, ‘Thank Christ I’m not playing up there!’"

Ruan Pienaar missed two penalty attempts, after Jones went off, and the Lions extended their lead to 19-8. Just after the hour mark, with Jean De Villiers also joining the walking wounded on the sideline, O'Driscoll delivered a crunching hit that would see a newly arrived sub joining him.

"Well, I still… I was a bit muddled in the head before that.

"I’d kind of got in a clash with Bryan Habana earlier on in the game, so I probably wasn’t seeing clearly. If I had my wits about me, I don’t know if I would’ve taken on a 21-stone, or 20-stone, 6-foot-6 second row taking a pop ball off a nine.

"But, yeah, it’s one of those moments that people look at and go, ‘Oh what were you thinking?’ I wasn’t really thinking an awful lot.

"It was one of those situations where I had the opportunity to maybe blindside him a little bit. And someone of my size needs that half-second to be able to put in a decent shot against someone so physically imposing as the likes of Danie Rossouw.

"So, it was one of the ones that stands out because when you see a big man topple over, having a smaller man hit him, people get a bit giddy. But I went off camera and had my own stumble. It’s just that the cameras missed it."

While Rossouw would go straight off, O'Driscoll was clearly buzzed. He stayed on for a few more minutes but missed a midfield tackle in the lead-up to a Bryan Habana try that would make it 19-15.

O'Driscoll and Jamie Roberts, his brilliant midfield partner, were both off injured as the game reached its' closing stages. Traded penalties left the Lions were 22-18 ahead with 10 minutes to go but conceded a converted try and a late penalty to lose the Test, and with it the series.

Ronan O'Gara, on for Roberts and himself far from 100% after a blow to the head, conceded that late penalty. It was 25-25 at the time, but Morné Steyn had a chance to win it.

"That kick could have been 10 metres further back, and I think Morné would have still got it.

"For me, that was one of the most special moments. People talk about World Cups and British & Irish Lions, but that moment was very close to winning a World Cup."

The Lions had already restored pride in the jersey - after that rough 2005 tour to New Zealand - but their Third Test win over the South Africans saw their tour end on an even brighter note.

They would go on to beat Australia in 2013 and draw with New Zealand in 2017. Should they get the job done agains the Springboks, this time out, it will truly mark an astonishing turnaround in their fortunes.


popular
Roy Keane's issue with Argentina star could rival Graeme Souness and Paul PogbaA~WQA~~~~~~AAAA
Roy Keane cracked up Ian Wright and Gary Neville with England team spirit remark
Lionel Messi makes Gary Neville eat his words after "silk pyjamas" comment
Roy Keane takes moment on TV to pay tribute to his old team in Cork
The nine England World Cup footballers who could have played for Ireland
'I was so stressed the week before the All-Ireland and I ended up having a panic-attack' - O'Shea and O'Sullivan open up
Roy Keane shoots down ITV presenter's 'excuse' for England's draw with USA
You may also like
5 days ago
"Two Irish players are best in the world" - Rugby reacts to big Josh van der Flier and Terry Kennedy awards
6 days ago
Two baffling omissions as four Ireland stars make World Rugby 'Dream Team' of the Year
6 days ago
Josh van der Flier claims World Rugby Player of the Year at Monaco ceremony
6 days ago
"Highlight of my Ireland career" - Behind the scenes as Jack Crowley and Ross Byrne covered for a legend
1 week ago
Bundee Aki reminded us all of his best qualities, on a night Ireland couldn't do without him
1 week ago
Peter O'Mahony delivered some fitting Jack Crowley comments after surprise Test start
Next Page