Brian O'Driscoll tells the story behind his most famous tackle

"People get a bit giddy."

It is a tackle that people still talk about, 11 years on, and Brian O'Driscoll is gearing up to re-live it all over again.

Earlier this year, during Lockdown No.1, Victor Matfield spoke with us on House of Rugby Ireland about the epic Lions versus South Africa series from 2009. During that chat, the Springboks legend revealed he had gone hunting O'Driscoll during the Second Test:

"Yeah, I must say, I think that was so funny, going into the Second Test, we were so charged up. I don’t know why but there was something in the week that Brian said, and I was just… I said, ‘There’s no chance. The guy is just getting away with everything’."

Informed about that comment by Eimear Considine, on a bonus episode of House of Rugby Ireland, the Irish rugby legend joked, "I was probably better off not knowing. I'd probably have been looking over my shoulder for the whole 80 minutes!"

O'Driscoll spoke superbly about the intensity of those Test matches against South Africa and the crunching hit he made on 6-foot-6 forward Danie Rossouw, during the second game, that left both men seeing stars. 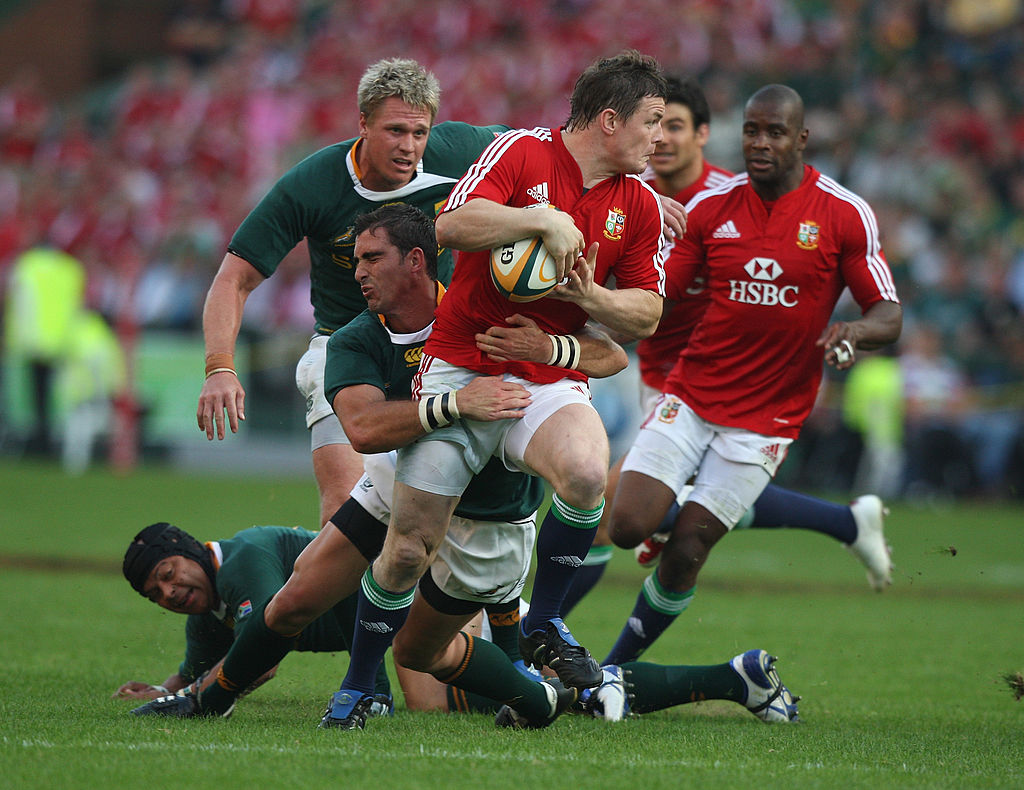 Brian O'Driscoll is tackled by Ruan Pienaar during the First Test between the Springboks and the British and Irish Lions at Kings Park Stadium in 2009. (Photo by David Rogers/Getty Images)

END_OF_DOCUMENT_TOKEN_TO_BE_REPLACED

The Lions looked set for a damaging and heavy defeat in the First Test until they rallied with late scores and showed the Boks that they would have to fight for everything to win the series.

Ian McGeechan's side were into win or bust territory and they started with incredible ferocity to leave the South Africans in massive trouble. Still retaining the bulk of their 2007 World Cup-winning side, the Boks came roaring back into the contest and it made for an epic.

"So many people talk about Lions Test matches and their memories and you see, so often, they choose that one, even though the Lions lost it in the dying moments. People think about the ferocity of it, and they’re right. It was really, really ferocious. But it was Test match rugby at its’ best. It was gladiatorial, and I think that’s why people love the sport, because it was no holds barred, we just went at one another."

Reminded about Matfield's comments, O'Driscoll spoke with the experience of a man who was often targeted by teams as the main man to shut down, and intimidate. 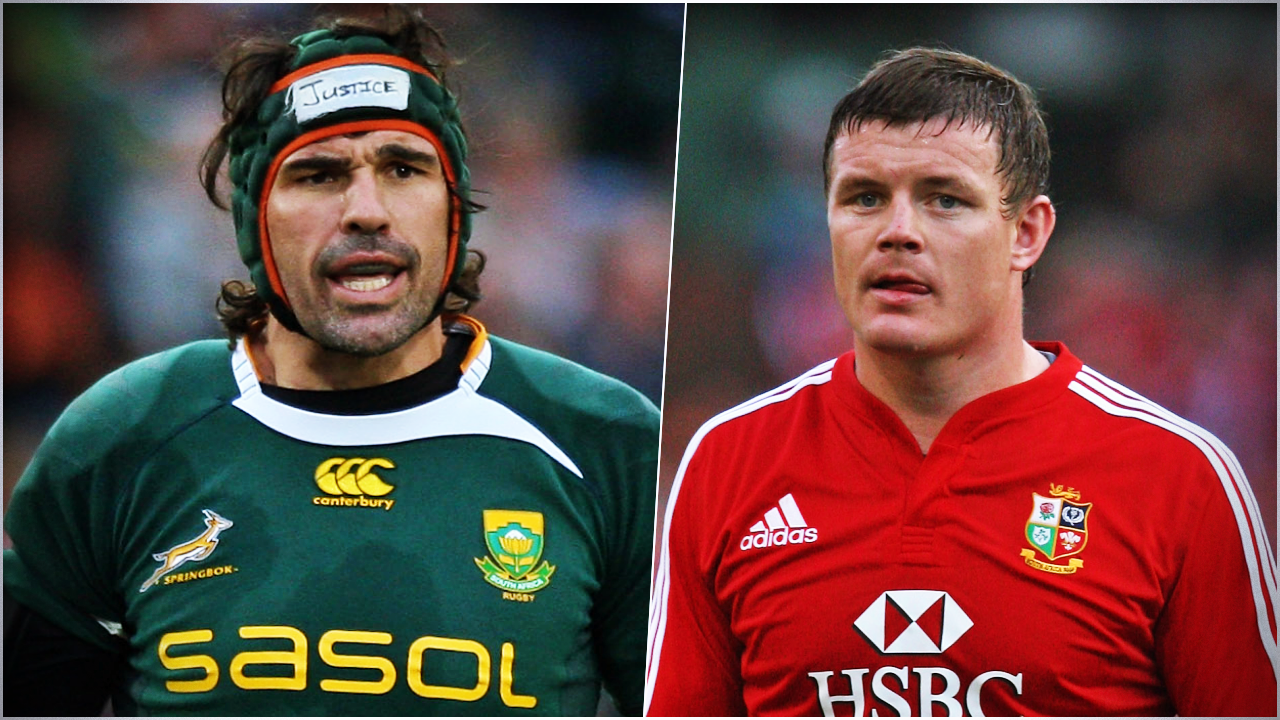 "You know what?" O'Driscoll began. "Sometimes, I think you can look on things in lots of different ways. When you know that’s happening, you… I don’t know if it changes your psyche.

"I think you look forward to it and almost take on the challenge. You want to make sure that your footwork is good on days like that, so you don’t get lined up and you don’t find yourself in a vulnerable position.

"But these days, and even going back 10 years, there’s so many camera angles and there’s very little off the ball stuff that people get away with any more, which is right, but it doesn’t mean that you can’t physically impose yourself on an individual. If you get the opportunity to throw your shot at them, you’ve got to give it everything."

O'Driscoll certainly did give it everything, on 61 minutes, when he levelled giant Springbok forward Danie Rossouw with a tackle that was heavy on power on light on wrapping.

Rossouw attempted to get up and play on, but he was clearly concussed and lost his footing. Not long after entering the fray as a sub, he was back on the sidelines.

"Well," O'Driscoll said, "I still… I was a bit muddled in the head before that.

"I’d kind of got in a clash with Bryan Habana earlier on in the game, so I probably wasn’t seeing clearly. If I had my wits about me, I don’t know if I would’ve taken on a 21-stone, or 20-stone, 6-foot-6 second row taking a pop ball off a nine.

"But, yeah, it’s one of those moments that people look at and go, ‘Oh what were you thinking?’ I wasn’t really thinking an awful lot.

"It was one of those situations where I had the opportunity to maybe blindside him a little bit. And someone of my size needs that half-second to be able to put in a decent shot against someone so physically imposing as the likes of Danie Rossouw.

"So, it was one of the ones that stands out because when you see a big man topple over, having a smaller man hit him, people get a bit giddy. But I went off camera and had my own stumble. It’s just that the cameras missed it."

Brian O'Driscoll got treatment on the pitch, after that collision, but insisted he was fine to play on. It summed up his fighting spirit but the better call would have been for him to come off as the Springboks scored two minutes later when the Irish centre rushed forward to block a passing lane but left a gap for Bryan Habana to dart through and score.

South Africa went on to win the game 28-25 and though the Lions won the Third Test, the series had been already clinched on that fateful day at Kings Park.

With the Lions due to play the world champions (again) Springboks next summer, expect that game and that hit to come up in a lot of discussions.


popular
Jamie Redknapp's face after going toe-to-toe with Roy Keane as Matt Doherty caught in the crossfire
Referee Mathieu Raynal puts Sexton in his place after TMO mess
Robbie Henshaw one of three Irish players deserving of Lions Test XV
QUIZ: How well do you know Manchester United players of the 2010s?
Solskjaer hits out at "outside influences" on referees over Man Utd decisions
Ellis Genge reveals death threats received after England's loss to Wales
Sexton compares "brilliant" Irish debutant Craig Casey to Jonny Wilkinson
You may also like
6 days ago
'We haven’t performed to the standard that everybody else expects us to"
6 days ago
Conor Murray's injury scare and how it could have altered Irish rugby history
1 week ago
"People associate hardness, ruthlessness and 'Fear of God' with Paul, but that's 1% of him"
1 week ago
Lions back three calls highlight Ireland's place in new world order
1 week ago
Jerome Kaino reveals how much the All Blacks get paid
1 week ago
Sean O'Brien and Jerome Kaino re-live tackle that left the Irishman in a sling
Next Page