"Drico got punched at least twice... it was like another sport"

Brian O'Driscoll versus Victor Matfield and Juan Smith. It could have ended much worse, but the Ireland centre got in his licks and escaped with honour, and body, intact.

The 2009 Test Series between the British & Irish Lions and South Africa was one of the most punishing in recent rugby history. In the Second Test, in Pretoria, the Lions lost five starters to injury or concussion during the 80 minutes and Ronan O'Gara may well have been concussed in playing out the final few minutes after shipping two big blows in the space of 90 seconds.

The Springboks won the First Test in Durban after threatening to blow Ian McGeechan's side off the park in the opening hour. A late comeback stirred up the tourists, though, and drove home that the world champion Boks were human after all.

In the Second Test, the Lions came roaring back and they led 19-8 with 20 minutes to go. One big difference in the opening hours of both games was how much more physical and aggressive the Lions were in Pretoria. Even the Lions backs were squaring up to the giant Springboks forwards, as South African captain Victor Matfield recalls:

"I remember [Lions scrumhalf] Mike Phillips looking up and he was talking about Bakkies Botha, Pierre Spies and Schalk Burger and he said, ‘Are you guys on steroids?’

"And Bakkies just looked at him and said, ‘I love your beautiful blue eyes!’  The only thing he came back to Mike Phillips with. He had a thing for scrumhalves, Bakkies!"

Phillips and O'Driscoll were also quick on the scene when Luke Fitzgerald was almost set upon by a couple of South African forwards, midway through the first half. Matfield recalled how he went looking for O'Driscoll during his interview with Barry Murphy and Andrew Trimble on Baz & Andrew's House of Rugby. 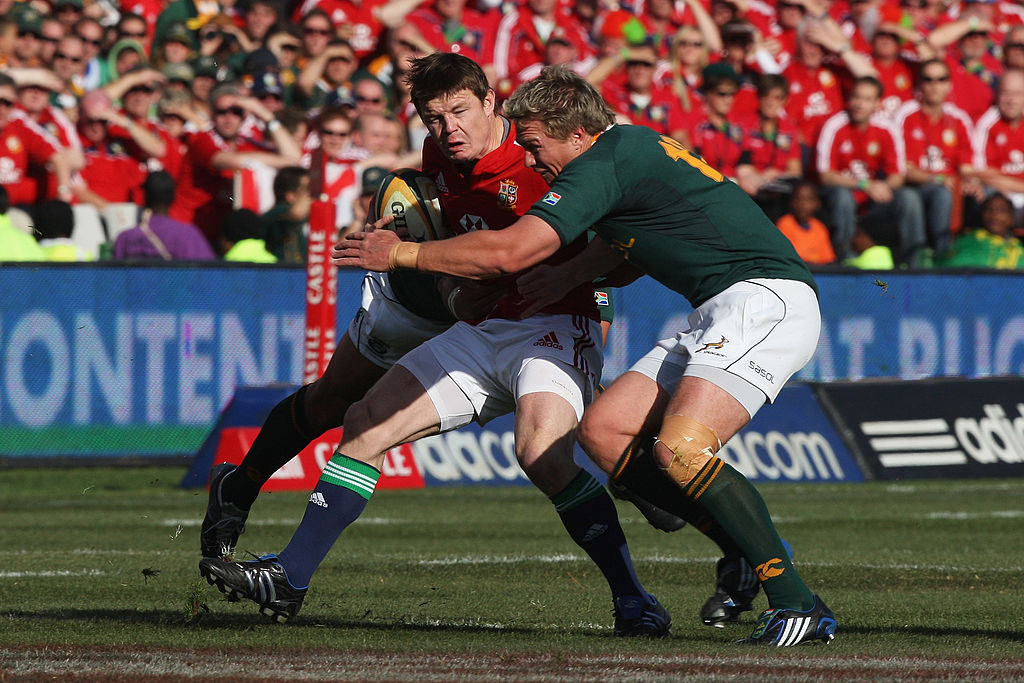 Brian O'Driscoll tackled by Jean De Villiers during the Second Test match between South Africa and the British and Irish Lions at Loftus Versfeld on June 27, 2009. (Photo by David Rogers/Getty Images)

END_OF_DOCUMENT_TOKEN_TO_BE_REPLACED

O'Driscoll was not backing down when Matfield and Smith went after him and took a couple of licks and shoves before grabbing hold of the Springbok captain's jersey and shoving him back.

"Yeah, I must say, I think that was so funny, going into the Second Test, we were so charged up. I don’t know why but there was something in the week that Brian said, and I was just… I said, ‘There’s no chance. The guys just getting away with everything’.

"I think it still came from the previous (Lions Tour) where Tana Umaga got into so much trouble with his tipping of Brian. So I don’t know but it was just something that we… I was looking for Brian, actually. And when the opportunity arises, it happened. I think there were plenty of guys involved."

Later in the game, O'Driscoll's thumping tackle on Danie Rossouw, minutes after he had come off the replacements bench, saw the South African flanker go off concussed. The Lions 13 played on for a few more minutes before he too had to leave the field of play.

Matfield concedes that Burger was fortunate to avoid a straight red card - as opposed to the yellow he received - when TV cameras caught him gouging the eyes of Fitzgerald. He also feels Botha got away with a shuddering hit on Adam Jones, which left the Wales tighthead with a broken arm.

"If you look at Bakkies’ career over the years, if they went back to the slow-mo, the amount of… we call it head-cleans. Where he cleans guys but he makes contact with his head, straight to the face of the other guys. He could have been suspended every game. He was looking for that the whole time.

"If you look at that clean on Jones, when he had to go off, the force that Bakkies went into that breakdown was quite something."

END_OF_DOCUMENT_TOKEN_TO_BE_REPLACED

Jones left the field of play with a fracture to his wrist, Botha remained on and play continued. The Boks outscored the Lions 17-3 from the 63rd minute until a Stephen Jones penalty, on 75 minutes, saw the scores level at 25-25.

With less than a minute left, a disorientated O'Gara was penalised for taking Fourie du Preez out as he jumped to contest the Munster man's kick-chase and Morné Steyn stepped up to clinch the Test, and series.

"That kick could have been 10 metres further back," Matfield said, "and I think Morné would have still got it.

"For me, that was one of the most special moments. People talk about World Cups and British & Irish Lions, but that moment was very close to winning a World Cup."

popular
Conor McGregor bought out of Proper 12 whiskey company
The SportsJOE 12 o'clock quiz | Day 312
QUIZ: How well do you remember the 2010 World Cup?
Longford leaving cert schools Europe's finest with measured masterclass
"No one comes into racing for money – it is a hard way to make a living" - Elliott releases heartfelt statement
Granit Xhaka reaches point of self parody with hilarious gaffe for Burnley goal
Ugo Monye's Lions XV features two Ireland players and Welsh captain
You may also like
2 months ago
Marcell Coetzee tells House of Rugby about his vow to Ulster
2 months ago
Visit Vodafone’s Pop-Up Shop at JOE with heaps of offers on smartphones, smartwatches and more
3 months ago
"If you don't have a seat at the table, you're probably the one being eaten"
3 months ago
Dan Leo joins House of Rugby Ireland to discuss his acclaimed Oceans Apart documentary
3 months ago
Caelan Doris backed for Lions despite England's expected Test XV domination
3 months ago
A player's perspective on the Monday morning after a big weekend defeat
Next Page