"I don't think that's the answer that you're looking for."

Brian O'Driscoll is correct here. One story of a training ground bun-fight with Ronan O'Gara, or some post-match verbals, and it would be an easy write-up.

Instead, O'Driscoll's version of events is that hard words and opinions were often shared but it was never personal and always with the team in mind. The relationship is as nuanced as most parts of life, but respect was always present. It was always mutual.

END_OF_DOCUMENT_TOKEN_TO_BE_REPLACED

We catch up with the former Leinster, Ireland and Lions legend a couple of days before he flies out to Marseille to cover the Challenge and Champions Cup finals with BT Sport. His old province are seeking their fifth European Cup title against a side that knocked them out in last season's semi-finals - Ronan O'Gara's La Rochelle.

"I'm heading Friday morning and there on for Lyon and Toulon (in the Challenge Cup)," he tells us. "Because of my Leinster connection, I'm doing some commentary on Saturday. And then have a team night out after - a good meal and go hang out together. It's rare enough that the whole team gets together like this - directors, producers, pundits, analysts, camera-people, everyone - and has a chance to spend some time together. It'll be a bit of craic, and hopefully toasting a fifth star!"

This will be the first final since 2019, too, with close to a full capacity. There may be smatterings of empty seats at Stade Velodrome, but tens of thousands are descending from the West of France, Ireland and all over the world. Having been at the 2020 and 2021 finals - with no fans permitted at the former and 10,000 at the latter - O'Driscoll is looking forward to this year's showcase playing out in front of a teeming audience.

"It'll be an amazing atmosphere this weekend, down in Marseille. Really good weather and two teams that are happy to play rugby, entertain, go after each other and be physical. There's so much to look forward to it." 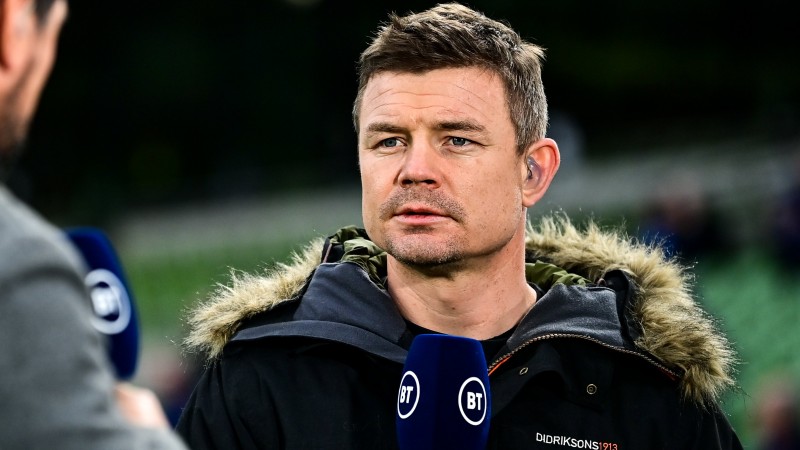 Former Leinster and Ireland player Brian O'Driscoll in his role as analyst for BT Sport during a Heineken Champions Cup match between Leinster and Bath at Aviva Stadium. (Photo by Brendan Moran/Sportsfile)

'He was always someone that set a tone'

Much of the focus, heading into this final, is on the latest reunion for Johnny Sexton and Ronan O'Gara.

END_OF_DOCUMENT_TOKEN_TO_BE_REPLACED

The former Ireland outhalf rivals had a spiky enough start, fuelled by the big Munster and Leinster clashes in the 2000s, but their relationship mellowed when O'Gara became skills then attack coach, over Sexton, at Racing 92, in 2013. The two seasons they spent in Paris saw them form a bond, but they are back fighting over the same bone, this weekend.

Brian O'Driscoll has been in the same orbit as O'Gara for almost 25 years, now, and he never had any doubts the Cork native would excel in top level rugby. On his first encounter with 'ROG', O'Driscoll says:

"He had this confidence about him. He was obviously learning, back then [in the late 1990s], and trying to find his way into the professional era, particularly in the international set-up. He had played for Munster before I had played for Ireland, but then I got capped [in 1999] before he did.

"You knew immediately that he was a competitor and a born winner. Someone that really backed his own ability. You can really see that now, in his coaching. He's guided - with Jono Gibbes last year, obviously - his team to three finals in 13 months, which is no mean feat. He's gone away and done the hard yards - gone to Christchurch, Paris and, now, La Rochelle - and has now earned his coaching stripes. So, he's never been shy of hard work and never been shy of doing things the difficult way to get results. From early on, he was always someone that set a tone."

O'Gara made his Ireland debut in February 2000, against Scotland. By that stage, O'Driscoll already had an eight-cap head-start on the outhalf, who was two years his senior. Asked if the Leinster centre and Munster outhalf had any early spats, O'Driscoll gives it a good mull before answering. 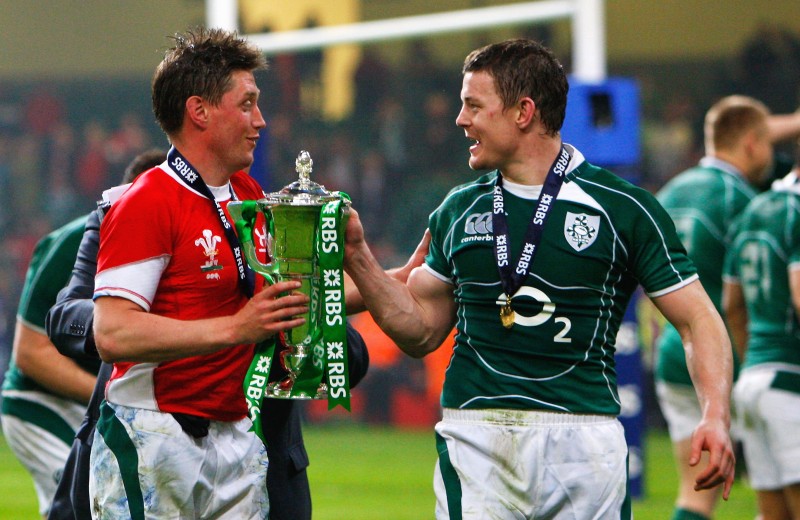 Ronan O'Gara and Brian O'Driscoll pictured with the Six Nations trophy at the Millennium Stadium, in 2009. (Credit: Getty Images)

'ROG isn't that sort of guy'

"I'm sure there were disagreements and arguments," Brian O'Driscoll says of his first encounters with Ronan O'Gara, before correcting himself.

"It was more so disagreements, than anything. Challenging one another's reasoning for doing something a different way. Or their thought processes on plays, or the specifics of a certain game-plan.

"That's part and parcel of what you do, in any rugby team. It can't all be a group of 'yes' men just agreeing with the captain or outhalf. You've got to be challenging one another. You've got to point out why you feel your point is relevant and worthy of people listening to.

"We rarely got into heated arguments or discussions, though, to be honest with you. There was a strong mutual respect for one another, but we both had good ideas and there are multiple ways of doing things.

"So, I don't think that's the answer that you're looking for. You wanted us to say that we had multiple blow-ups with one another! The reality was, ROG isn't that sort of guy. As feisty as he is, with his own teammates he was controlled, measured and gets his point across. But also, very much focused on delivering with his own performance." 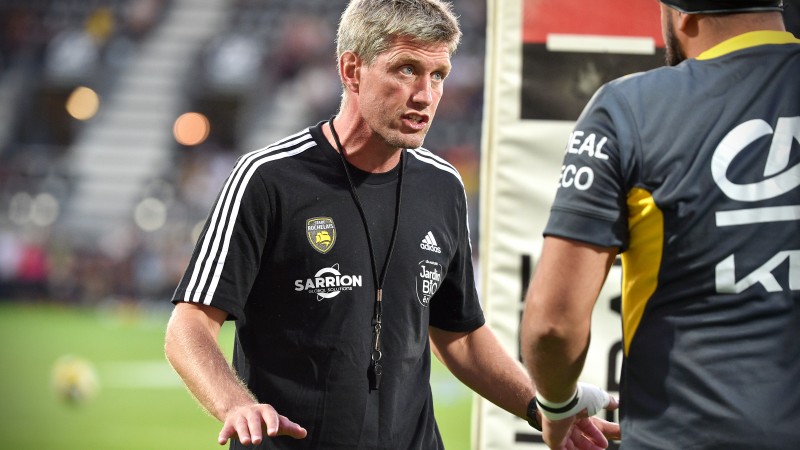 Asked if he always felt Ronan O'Gara would transition from player to a top-level coach, O'Driscoll replies, "So many 10s are coaches.

"You look at the current ones involved in this final. You've Felipe Contepomi coaching [Leinster's attack], Johnny Sexton has been coaching from early on. He's doing a lot of on-field coaching. And then ROG as well. It's innate in what you do.

"You're the hub of messaging, delivering the strategy and game-plan. You're kind of a quasi CEO or COO (chief executive or chief operations officer) in the team environment, because you're that connection between forwards and backs. And you've got to have a very clear idea of how the game is being played.

"It didn't surprise me that he'd go off down the coaching route," he says. "And it's not that I'm surprised how he has elevated himself, year on year, but he has done things the challenging way and not made the easy choices. You have to tip your cap to him on that."

BT Sport is the home of European Rugby Champions Cup. The 2021/22 season concludes this weekend with Leinster v Stade Rochelais live on BT Sport 2 at 4pm on Saturday, May 28. Find out more on how to watch at BT Sport bt.com/sport


popular
Talksport presenter puts Martin O'Neill to the pin of his collar over Declan Rice and Jack Grealish
Gary Neville sticks up for Ronaldo as contextless pictures and videos taken as gospel
Ariel Helwani shares Paddy Pimblett WhatsApp messages as spat becomes public
World Cup Power Rankings: The top eight pundits of the tournament so far
Ballyhale's Colin Fennelly felt Ballygunner's victory speech was disrespectful
World Cup Power Rankings: The top 10 players at the tournament ahead of the quarter-finals
Rory McIlroy explains 'falling out' with Shane Lowry that lasted a few years
You may also like
2 weeks ago
Alternative World Rugby Dream Team selected, with two extra Ireland stars
2 weeks ago
"Two Irish players are best in the world" - Rugby reacts to big Josh van der Flier and Terry Kennedy awards
2 weeks ago
Two baffling omissions as four Ireland stars make World Rugby 'Dream Team' of the Year
2 weeks ago
Josh van der Flier claims World Rugby Player of the Year at Monaco ceremony
2 weeks ago
"Highlight of my Ireland career" - Behind the scenes as Jack Crowley and Ross Byrne covered for a legend
2 weeks ago
Bundee Aki reminded us all of his best qualities, on a night Ireland couldn't do without him
Next Page