"The trajectory Dan was on, it felt as though there was no ceiling" - Brian O'Driscoll

"I literally only found out the news a few seconds ago. Sad. Very sad."

What is supposed to be a chat revolving around the upcoming Champions Cup weekend, this morning, started off on us almost getting a live Brian O'Driscoll reaction to Dan Leavy being forced to retire.

Although they would have trained together, in Brian O'Driscoll's final seasons with Leinster, the Ireland legend never got to share a pitch, for a professional game, with Dan Leavy. O'Driscoll hung up his booths four months before Leavy, a hot prospect out of St Michael's College, made his Leinster debut.

END_OF_DOCUMENT_TOKEN_TO_BE_REPLACED

Less than eight years on and Leavy is a retired rugby player, just like O'Driscoll. A knee injury, sustained in 2019, may have healed in its own way, but setbacks were never far from Leavy's rugby life after that moment. He battled away to keep going but announced his retirement today.

"His clim from a provincial to an international level was significant and speedy," O'Driscoll reflects.

"The trajectory he was on, it felt as though there was no ceiling. Then, all of a sudden, you get knocked down and impacted by an injury that bad.

"I had heard, at the time, that the (knee) injury was really, really horrific to everyone out on the park. The doctor had not seen too many injuries worse on a rugby field. So, when you know how serious it is, it is always going to be difficult for any player to come back from that.

"It has turned out to be the case and all you can do is feel very sorry for the guy. He's been knocked and stopped from having the big career that he was capable of having. That's the brutality of professional sport." 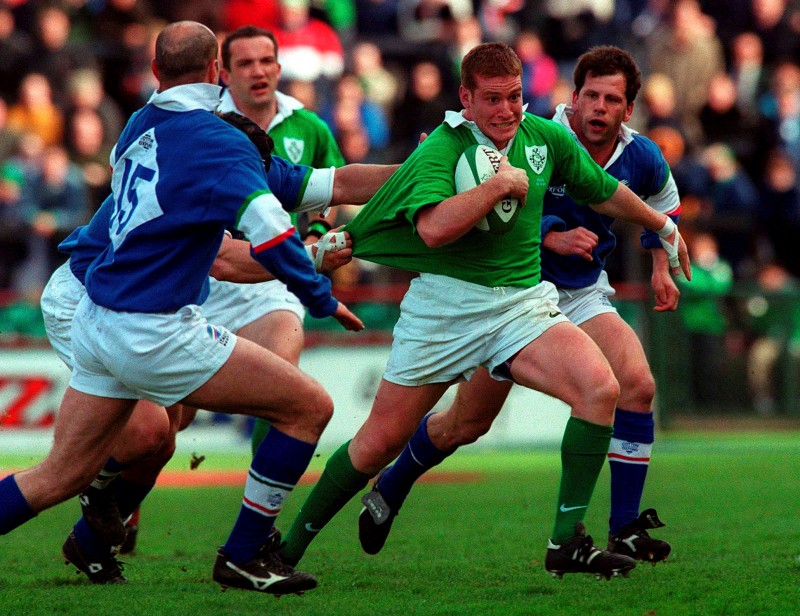 Ciaran Scally is tackled by Orazio Arancio and Javier Roselli (15) of Italy during a 1999 match at Lansdowne Road. (Photo by Matt Browne/Sportsfile)

END_OF_DOCUMENT_TOKEN_TO_BE_REPLACED

Brian O'Driscoll was a Leinster and Ireland teammate of the precocious scrumhalf Ciarán Scally. Set for a long career in blue and green, Scally suffered a bad knee injury and was forced to retire in his early 20s.

"When you see something like that happen," O'Driscoll muses, "it is massively disappointing for them and, selfishly, from a personal level.

"It's you, having spent time with them and expecting to spend so much more together. I'm talking there about Ciarán Scally. I remember my foremost feeling was being incredibly sad for him. Then selfishly feeling sad that I wouldn't get to share all of those times with him, over the next 10, 12 or 15 years. You would have anticipated him being a pro for a very long time.

"And then, those individuals have to deal with it their own way. Many of them step away from the game completely and don't watch any more, for a long time. Throw themselves into their new career. And then they find a way to get back into the game, when that pain eases."

END_OF_DOCUMENT_TOKEN_TO_BE_REPLACED

One hopes that Dan Leavy does stay involved in the game, even if he does step back from it for a while.

One thing is for sure, the now retired back-row will be cheering his teammates along as they take on Connacht in the Champions Cup, this Friday.

BT Sport is the home of European Rugby Champions Cup. The 2021/22 season continues with a weekend full of games, including Leinster v Connacht live on BT Sport 1 at 7.15pm on Friday 8th April. Find out more information on how to watch at BT Sport bt.com/sport


popular
World Cup 2022 Day 12: All the major action and talking points
The FootballJOE Qatar World Cup 2022 Geography Quiz
From Ireland to Argentina: Alexis Mac Allister's Irish roots explained
France demand FIFA change result of World Cup defeat over 'rule break'
Cristiano Ronaldo 'agrees £173m-a-year deal' with Saudi club
"Nowadays, even if I don't hit a ball, I don't care as long as we win" - Gleeson learning from the past
Castleknock's Warnock the hero as Maynooth win first ever Ryan Cup final
You may also like
3 hours ago
From Ireland to Argentina: Alexis Mac Allister's Irish roots explained
6 days ago
Former England international admits he wishes he had played for Ireland
1 week ago
Two baffling omissions as four Ireland stars make World Rugby 'Dream Team' of the Year
1 week ago
Josh van der Flier claims World Rugby Player of the Year at Monaco ceremony
1 week ago
"Highlight of my Ireland career" - Behind the scenes as Jack Crowley and Ross Byrne covered for a legend
1 week ago
Bundee Aki reminded us all of his best qualities, on a night Ireland couldn't do without him
Next Page