"It's through the trenches that you grow and you become better."

Of all the New Zealand players that did not deserve to be on the losing side of the Third Test, let alone the series, Ardie Savea stands out like a beacon.

The All Blacks No.8 was a sensation against Ireland and looked, for a long time, to be leading a one-man charge to get his side over a gigantic hump after they fell 22-3 behind. Savea made heaps of metres, stuck mountains of tackles, won big turnovers, scored one try and assisted another.

END_OF_DOCUMENT_TOKEN_TO_BE_REPLACED

However, as William Money tells 'Little Bill' near the end of the classic western, Unforgiven, 'Deserves got nothing to do with it!'

Savea, with Akira Ioane and Will Jordan, led a mini charge of the light brigade. Tries, and sheer effort, from the trio, backed up by their teammates, got them back to just three points behind, but Ireland rallied to claim the Third Test and, with it, the series.

Following his side's 32-22 loss, a gutted yet stoic Ardie Savea spoke in the New Zealand changing room about acceptance, devastation and resilience. The interview, and the footage itself, is a genuine tough watch, especially when you consider how well he played all series.

"Pretty heartbroken, mate, to be on the wrong side of history. It's hard to put into words. Real disappointed and, to all our fans out there, I just apologise

"You've got to give credit to the Irish. They came out firing again, and we just couldn't handle the first half. We came back a bit in the second half but it just wasn't our night, tonight. It's... it's hard hard, bro. I'm lost for words.

"We got riled up at half-time. We just weren't playing our game in the first half. We did that in the first 10 minutes of the second half, but there were little moments were we'd have the ball, knock it on, turn it over in our own half and they'd punish us again. We know we can't make those sort of mistakes against a quality Irish side." 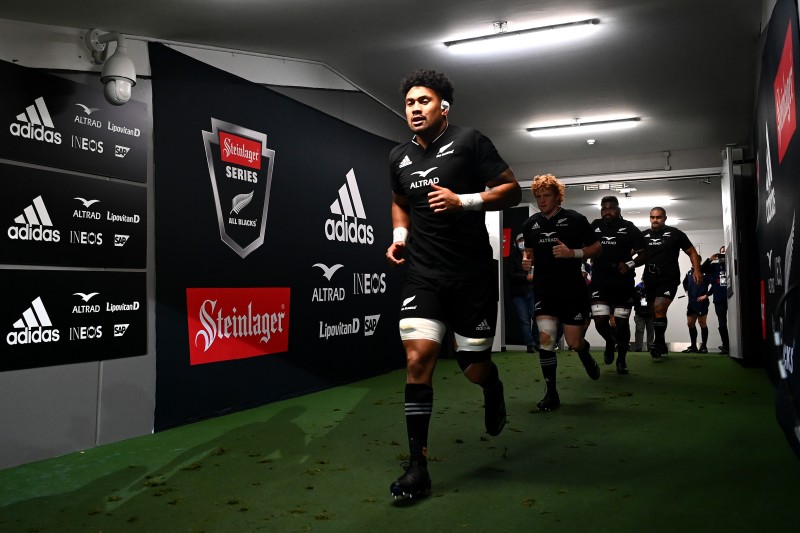 Ardie Savea runs out ahead of his All Blacks' side's Steinlager Series match against Ireland. (Photo by Hannah Peters/Getty Images)

Ardie Savea: We've got to put some pride back in the jersey

As Ardie Savea continued to chat in the All Blacks changing room, Irish players like Jamison Gibson-Park, Cian Healy, Nick Timoney, Andrew Porter and Mack Hansen entered to catch up with their foes from that night.

The Hurricanes forward said it was time for himself and his teammates to 'look hard within'. He added:

"The most important thing is, we stick together. Whoever makes the team and brings us together, and us as leaders - management, senior players - we've got to step up. We've got to put some pride and mana [honour] back in the jersey.

"There is going to be a lot of pressure, expectation and outside noise. I'm here for it. We've been anointed to be in this jersey, and it is up to us to be able to re-gather and regroup. But the main thing is, we've got to stay together. It's going to be tough looking at ourselves, after this series, but it's through the trenches that you grow and you become better."

Choking up, Savea admitted, "It's going to be a hard pill to swallow tonight, and all week. We've got a week off, or two weeks, but we'll sit on it. We've got to be better."

You can watch that full changing room interview footage here:

Up next for Ardie Savea and the All Blacks, The Rugby Championship with world champions South Africa first on deck. The NZRU, meanwhile, say they will meet with head coach Ian Foster for a full review of this series in the coming weeks.

Joe Schmidt will come on board as an All Blacks selector, but there may be more changes afoot.


popular
The FootballJOE Pub Quiz: Week 50
“Players flourished when Roy Keane left” - Rio Ferdinand on why Keane was a 'detriment' to Man United
Specsavers troll former Liverpool star for Darwin Nunez headbutt claim
"To be able to call myself the fastest man in Irish history is just amazing" - Olatunde overjoyed after record-breaking run
Man United considering loan move for Christian Pulisic
The moment Israel Olatunde realised he qualified for the Euro 100m final is what it's all about
Wexford, Waterford and Kilkenny down some good men as Australia calls
You may also like
2 weeks ago
“My confidence was on the deck" - Aaron Connolly explains why he has made the move to Italy
2 weeks ago
Every Irish transfer in football, this summer, as several big deals get done
3 weeks ago
Six Irish players make damn impressive 'World XV' that would take some beating
3 weeks ago
The frontrunners for Ireland's 33-man squad for the 2023 World Cup
4 weeks ago
All Blacks media manager explains why Ian Foster appearance was cancelled after Ireland defeat
4 weeks ago
Warren Gatland selects nine Irish players in his strongest Lions XV, right now
Next Page