The times they are a-changing.

Ireland head coach Andy Farrell has provided the reasoning and rationale behind some of his big team selections for the Autumn Nations Cup clash with England, at Twickenham, this weekend.

Farrell has made four changes to his starting XV, from the side that defeated Wales 32-9 last time out, and the big calls are in the second and back rows, as well as at 9 and 10.

For the first time in over NINE years, Ireland go into a Test match against an English side without either Conor Murray or Johnny Sexton starting. The last such occurrence was in August 2011 in a World Cup warm-up game that saw Eoin Reddan and Ronan O'Gara in the 9 and 10 jerseys.

For Farrell, he spoke about this Saturday's game being a prime opportunity for players with no more than a handful of caps to stake claims to be seriously considered for the big games to come over the next four months. He commented:

"I'm excited about it. There are a few changes in there, the big one being James getting to lead this side, and for guys getting the opportunity for first starts at Twickenham."

"Ross Byrne deserves it," said Farrell of the Leinster man starting at 10. "He deserves his chance. It's like others. How do you find out if they are ready for the big games and big occasions, without giving them a chance in the big occasions?" 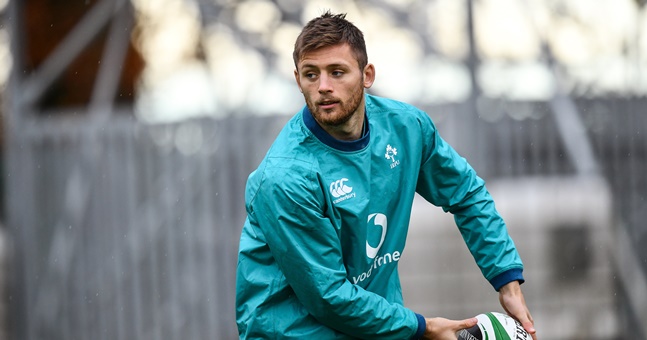 Farrell's son, the England outhalf Owen Farrell, has often had battles and niggles with Johnny Sexton (out injured for this game). The Ireland coach is not fazed by the England 10 going after Ross Byrne too.

END_OF_DOCUMENT_TOKEN_TO_BE_REPLACED

When asked about the medical concern that ruled Iain Henderson out of the Wales game, Farrell noted that it was 'a private issue that I'd leave to the medics and Iain'. Henderson is on the replacements bench with Connacht lock Quinn Roux starting beside Ireland's new captain, James Ryan.

"I 100% saw a curiosity in James in last 9 or 10 months of him maturing and his leadership within the squad... I saw something nine months ago, going into the Six Nations, that if people are talking about me in this vein, maybe I should do something about it. I've been really impressed with him over the past nine months."

On Hugo Keenan starting at fullback ahead of fit-again Jacob Stockdale, Farrell commented, "Hugo deserves another start again. His first time to start at Twickenham... we'll learn more about Hugo in that position after the game."

Asked if he could guarantee a real Irish fight at Twickenham, after three successive losses to England, Farrell stated"

"I can't make promises. I've not got a crystal ball. This is a different group... they can't wait to get out there and show what they can do."

popular
Conor McGregor bought out of Proper 12 whiskey company
Sean O'Brien's parting gesture won't soon be forgotten by Scott Penny
QUIZ: How well do you remember the 2010 World Cup?
The SportsJOE 12 o'clock quiz | Day 312
Leinster reach PRO14 Final but Ulster have every right to feel aggrieved
Amanda Nunes swiftly apologises to Ronda Rousey after Dana White's update on her future
Here's a list of 23 people who own a greater share of the UFC than Conor McGregor
You may also like
4 days ago
"There would be a boot in the sink, a dish there, a toothbrush under the bed!"
4 days ago
Ugo Monye's Lions XV features two Ireland players and Welsh captain
4 days ago
Strong Ireland team Andy Farrell should pick to turn over Scotland
5 days ago
Welsh star backs Ringrose and Henshaw for Lions backline
5 days ago
Full text of Craig Casey's interview after lively Ireland debut, and initiation song
5 days ago
Ireland release Craig Casey, Bundee Aki and 11 more back to provinces
Next Page