Mike Tindall tried his best to temper his critique of Joe Schmidt's Ireland, during an appearance on JOE UK's House of Rugby, but he is certainly not convinced they are within touching distance of the All Blacks.

The former England international, and World Cup winner, praised Ireland for carrying out Schmidt's game-plan to a tee but he feels they have some clear weaknesses. He commented:

"My issue with Ireland is that I'm not sure if they will ever do well at a World Cup with the rugby they play, currently. If you go back to the Six Nations, they could have lost three of their games... I always believe a team are going to beat them, which is weird because they don't!"

The latest episode of Baz & Andrew's House of Rugby provided a perfect opportunity for two Irish rugby stars to have their say [from 1:01:30 below] on Tindall's hot take. 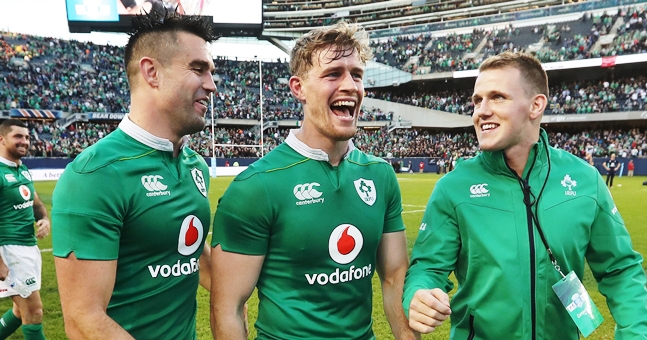 Andrew Trimble and Jenny Murphy were less than convinced with Tindall's argument and his opinion of Ireland's style of play. Trimble began:

"To me, that’s not really good enough. I think he just doesn’t want to like Ireland, but he concedes that we’re really good and we’re consistent performers. I think he rambles a little."

"He did," agreed show co-host Paddy McKenna. "He was trying, he kept on several occasions, to bring it back around and then… no, it’s just that blatant, blatant disregard for Ireland just could not be beaten."

END_OF_DOCUMENT_TOKEN_TO_BE_REPLACED

Murphy, an Ireland Women's international, noted Tindall's line about Ireland always managing to get results. "But, like, that’s what we want," she said. "That’s what Ireland want."

Trimble continued, "And Tindall said, 'Sure, they make the most passes out of any team in international rugby but they're not very good passes'... 'or they're one-out passes'. I mean, come on, stop this."

To McKenna, he feels Tindall did not smooth the way into his critique by beginning with five words - 'My issue with Ireland is'.

There is, of course, only one way to prove the former England star wrong and Ireland have a great chance to do so at the 2019 World Cup in Japan.


popular
“Players flourished when Roy Keane left” - Rio Ferdinand on why Keane was a 'detriment' to Man United
Specsavers troll former Liverpool star for Darwin Nunez headbutt claim
Man United considering loan move for Christian Pulisic
The FootballJOE Pub Quiz: Week 50
"To be able to call myself the fastest man in Irish history is just amazing" - Olatunde overjoyed after record-breaking run
"I went up to the Italians and gave them a big auld shoulder" - Paul O'Donovan does it again
Wexford, Waterford and Kilkenny down some good men as Australia calls
You may also like
2 weeks ago
“My confidence was on the deck" - Aaron Connolly explains why he has made the move to Italy
2 weeks ago
Every Irish transfer in football, this summer, as several big deals get done
3 weeks ago
Six Irish players make damn impressive 'World XV' that would take some beating
3 weeks ago
The frontrunners for Ireland's 33-man squad for the 2023 World Cup
4 weeks ago
All Blacks media manager explains why Ian Foster appearance was cancelled after Ireland defeat
4 weeks ago
Warren Gatland selects nine Irish players in his strongest Lions XV, right now
Next Page