Analysis: Ireland need their rolling maul to hum if they are to knock England over

One of Ireland's greatest strengths in the 2014 Six Nations was nullified at Fortress Twickenham.

He said: 'It is something we have worked very hard on. We showed bits and pieces of it in previous campaigns but we've obviously been much more consistent this year. The flip-side of it is that no-one expected Ireland to maul. Now that we've mauled successfully a number of times, teams are going to be expecting that.'

END_OF_DOCUMENT_TOKEN_TO_BE_REPLACED

The Ireland hooker was correct. England were waiting for their visitors to maul. When Ireland did, the English had the answers. The match-stats will say Ireland won seven of their mauls but the three they lost were all in or around the English 22.

Post-match, Ireland captain Paul O'Connell bemoaned the English tactics at the maul - using selected players to yank down the arms of front-leading players, dropping players to the turf and, on two occasion, sending over a rogue agent [Courtney Lawes - pictured below] to completely spoil the Irish drive. 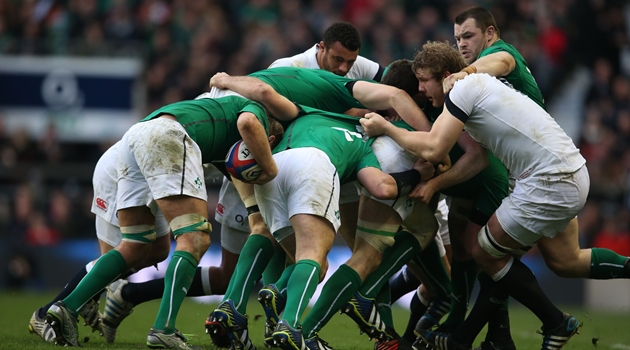 Devin Toner, O'Connell's second row partner that day, and for this Sunday's return, told us: 'I can't remember off the top of my head what Paulie is talking about. I think we got a few chances to maul against them, but I don't think we got a front foot up on them.

'They're very good at breaking the joints around the front of the maul, so if they get a chance to swim over the top, grab the ball, I don't think any team can handle that. We've got to just counteract that.'

END_OF_DOCUMENT_TOKEN_TO_BE_REPLACED

Ireland's first two lineouts of the match had 'Joe Schmidt' stamped all over them. On 10 minutes, Best had a throw about 35 metres out and England would surely have been expecting their first maul task. Instead, Best threw to the back of the lineout and found Peter O'Mahony on the charge. The subterfuge got Ireland into the English 22 until, six phases later, possession was lost.

The second lineout was after 14 minutes and was right on the English 22. O'Mahony claimed and turned his back, feigning to set up a maul, before Chris Henry dished a quick pass and Johnny Sexton lofted a cross-field kick that found Andrew Trimble and almost led to a score. Ireland were holding onto their supposed ace.

END_OF_DOCUMENT_TOKEN_TO_BE_REPLACED

Into the second half and the rolling maul was still nowhere to be seen. Ireland's 41st-minute lineout was on the English 22 but Schmidt and his players had another dashing backline move planned. Quick ball off a claimed set-piece and, four phases later, Rob Kearney scythed over for a great try.

It was not until 47 minutes in when the rolling maul was unveiled. Courtney Lawes showed England's hand by climbing over the top and not releasing the ball-carrier [Jamie Heaslip] until he was on the deck and had conceded a penalty:

Danny Care's try and five kicked points from Owen Farrell had England 13-10 up in the closing stages. With six minutes to play, the moment O'Connell referred to, post-match, cropped up.

O'Connell claimed a Sean Cronin throw and, having fed the ball back to Jordi Murphy, found both Chris Robshaw and Courtney Lawes over on the Irish side of the maul.

With a minute left to play, Ireland went to the maul again but this time on their own 22. Lawes, who was named man-of-the-match, was there again and in a wholly illegal manner. Ireland got the penalty but O'Connell remained livid:

We caught up with Ireland forwards coach Simon Easterby to see if Ireland would go back to the mauling well, especially when they are being roared on by a fervent home crowd. Have Ireland been working on any new tricks?

He said: 'We're always analysing each other and looking at different ways to overcome what the opposition might do in defence. The maul and the scrum are two good examples where it’s close-quarters stuff and we have to be smart and disciplined about what we do.

One hopes the referee, Craig Joubert, is keeping and eye out for white jerseys in the green mass.


popular
The four stone-cold certainties for All-Stars even as early as this
Kylian Mbappe reportedly wants PSG to sell Neymar
Eamon McGee just couldn't help himself with Armagh-melee tweet
Gavin Coombes one of four Irish players to push themselves into Test picture
"The economy was one of the big reasons" - Cadogan's move from an electrician to personal training
"He's actually smiling putting the ball over the bar. He should nearly be fainting." - Ryall on Limerick's legacy
Richard Keys tears into Gary Neville over 'nonsense' new book
You may also like
2 months ago
Ronan O'Gara on seven Ireland players that have him excited, ahead of New Zealand tour
3 months ago
The Top 20 rugby players in Ireland right now
3 months ago
Marlie Packer grabs super hat-trick as England demolish Scotland
3 months ago
Hugo Keenan's latest achievement is just reward for a player that keeps getting better
3 months ago
Five Irish players make Six Nations 'Best XV' picked by Sean O'Brien and Alex Goode
3 months ago
"My view isn't a popular view - I think Eddie Jones is a very smart coach" - Ronan O'Gara
Next Page