The British Grand Prix was red-flagged after just one corner after a horrific crash involving Zhou Guanyu which saw the driver's car slide upside down before flipping over the barrier.

Going into the first corner, George Russell's Mercedes crashed into Zhou's Alfa Romeo. Zhou then made contact with another car, causing him to flip over. 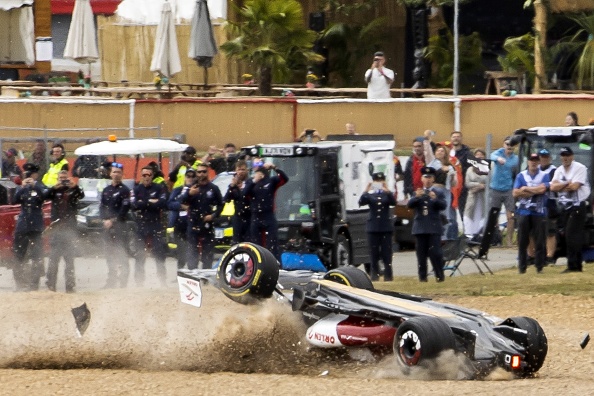 END_OF_DOCUMENT_TOKEN_TO_BE_REPLACED

The car then slid upside down for a prolonged period of time before making contact with the barrier.

But he was carrying such momentum that the vehicle then flipped over the barrier, ending up lodged between that and the stand where spectators were.

The race was immediately stopped, with many concerned for the safety of the Chinese driver.

You can see the shocking footage below.

The moment Zhou's Alfa Romeo rolled over in horror crash.

Zhou is 'ok' and stretchered to medical centre; Russell and Albon are also out of the race. pic.twitter.com/YXifaPQ3mL

Alfa Romeo have confirmed that thankfully, Zhou is conscious and is undergoing medical evaluation.

Following a crash at the start of the British Grand Prix, Zhou Guanyu is conscious and now at the circuit’s medical centre to undergo evaluation. #BritishGP

Earlier on Sunday, there was another shocking crash in which the Halo device around the drivers' cockpits was credited with saving a Formula 2 racer's life.

In the race taking place at the track on Sunday morning, drivers Roy Nissany and Dennis Hauger collided on the opening lap.

Hauger lost control of his car, going off the track, before he went over a "sausage kerb" which launched his vehicle into the air.

It then landed on top of Hauger's car, with both then going off track and coming to a halt.

Both Roy Nissany and Dennis Hauger walked away from this scary incident #BritishGP #F2 pic.twitter.com/URWV64LGQe

You can read more about that here.