Just before turning into a bend, the German lost control of her car which then flew up into the air, spinning, and crashed into the fences around the edge of the race track.

END_OF_DOCUMENT_TOKEN_TO_BE_REPLACED

Fortunately, a statement from her team Van Amersfoort Racing has confirmed that Florsch is conscious and in a stable condition. She has, however, suffered a fractured spine and will have surgery on Monday.

Watching the footage, you can't help but think the outcome could have been much, much worse.

A crash in the Formula 3 Macau Grand Prix has to be seen to be believed. Early reports suggest everyone involved survived. pic.twitter.com/jc4TXOdNn0 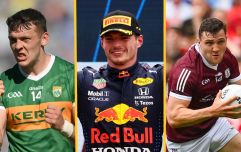 END_OF_DOCUMENT_TOKEN_TO_BE_REPLACED

The driver of the other car involved in the crash, Japan's Sho Tsuboi, has also been taken to hospital with back pain.

Photographer Minami Hiroyuki has a concussion, while marshal Chan Cha In suffered a fractured facial bone and lacerations according to race officials. Another photographer, Chan Weng Wang, has a liver laceration.

The race was immediately red-flagged and did not restart until an hour after the incident.

Florsch thanked fans for their messages of support on Twitter after the accident.

Just wanted to let everybody know that I am fine but will be going into Surgery tomorow morning. Thanks to the @fia and @hwaag_official @MercedesAMGF1 who are taking great care of me.
Thanks to everybody for the Supporting messages.
Update soon.

Former Formula 1 World Champion Jenson Button was one of those to express relief that the crash wasn't as bad as first feared after footage emerged.

Sorry to hear that @SophiaFloersch has a spinal fracture but looking at the horrific accident she had today in Macau it could have been so much worse. #getwellsoonSophia https://t.co/NFqxi0stNB