Championship leader Max Verstappen and reigning champion Lewis Hamilton made contact on lap one of the British Grand Prix, causing the Dutch driver to careen off the course.

The pair were dicing it out for the lead when Hamilton came across and clipped the tyre of Verstappen:

Drama on the opening lap at Silverstone

Verstappen and Hamilton collide at Copse

Verstappen hits the barriers. He's out of the car and has walked away #BritishGP 🇬🇧 #F1 pic.twitter.com/mvZZyI2fkS 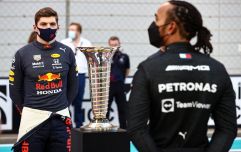 END_OF_DOCUMENT_TOKEN_TO_BE_REPLACED

The contact was seemingly the fault of Hamilton, and saw Verstappen in a particularly nasty bump with the barrier, though he has luckily exited the car with no obvious injuries.

Hamilton was heard to say he had the line on his rival, but Red Bull vehemently protested.

"I was fully inside," claimed Hamilton, "it was my line, and he turned in on me."

Red Bull team principal Christian Horner told the race director, "It was 100 per cent Max’s corner. As far as I am concerned, the full blame is on Hamilton."

The moment of impact between Hamilton and Verstappen 👀#BritishGP 🇬🇧 #F1 pic.twitter.com/kxbV5xPYPt 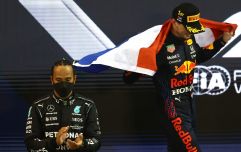 END_OF_DOCUMENT_TOKEN_TO_BE_REPLACED

The incident has caused a red flag, which meant the race has stopped while debris from Verstappen's car is cleared and the barrier is rebuilt.

The incident left Ferrari driver Charles Leclerc at the front of the grid. After the race resumed, it was confirmed that Hamilton would have to serve a 10-second penalty, which would cost him up to 30 seconds in total [with pit lane entries and exits considered].


popular
The best nicknames in the GAA as chosen by you
If it was easy we'd all be doing it
Predicting Ireland's starting XV for Wales after Andy Farrell squad announcement
Michael Darragh making the most of retirement
Scott Brown waves off Rangers' Ryan Kent after red card
Jamie Heaslip delivers Jack Carty reality check, hours before Ireland call-up
How to get your gym work, nutrition and mindset right for the GAA pre-season with Brian Keane