Here's everything you need to know ahead of the Australian Grand Prix 2022.

The Australian Grand Prix 2022 takes place from Friday, April 8 to Sunday, April 10. Here is everything you need to know about the race, including start time, standings and TV channel details.

Max Verstappen's Formula One world title defence is up and running after his victory at the Saudi Arabian Grand Prix at the weekend, with Australia set to host the third race of the season.

END_OF_DOCUMENT_TOKEN_TO_BE_REPLACED

The Red Bull driver - who failed to register any points in the season opener in Bahrain after failing to finish - secured his first win since he was crowned champion at the end of last year.

The Dutchman overtook Ferrari's Charles Leclerc with four laps to go, with Verstappen's teammate Carlos Sainz finishing in third and Sergio Perez, who finished on pole position in qualifying, ending in fourth.

Seven-time champion Lewis Hamilton has endured a nightmare start to the season having finished 10th after one of the worst qualifying performances of his career.

F1 will now head to Melbourne for the third race of the calendar, with so much already riding on the Australian GP.

When is the F1 Australian Grand Prix and what time does it start?

The race weekend is scheduled to take place from Friday, April 8 to Sunday, April 10. 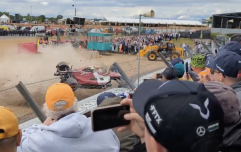 END_OF_DOCUMENT_TOKEN_TO_BE_REPLACED

There will be two practise sessions taking place on Friday and one on Saturday.

Qualifying will commence at 7 am UK and Ireland time on Saturday morning.

Given the time difference in Australia, the race itself will officially start at 6 am on Sunday morning.

How do I watch the F1 Australian Grand Prix live on TV?

Where can I watch practise, qualifying and the race?

Qualifying will start at 6 am on Sky Sports F1 on Saturday morning, with the race beginning at 5:55 am on Sunday on both the Sky Sports Main Event and Sky Sports F1 channels.

Sky Sports customers will also be able to live stream the race via the SkyGo app using their mobile, computer or tablet.

If you are not a Sky customer, you can purchase a Sky Sports Day Pass from NowTV for €9.99.

Channel 4 will also show highlights from the race once it has come to a conclusion, which are usually available later in the evening.

Who finished where in the Saudi Arabian Grand Prix?

Who is currently leading the standings?

What has been said so far?

Leclerc admitted that his battle with Verstappen in Saudi was 'tricky' and that he didn't think there was much more he could've done to win the race.

The 24-year-old also insisted that the Ferrari team are working well as a unit and that they potentially missed a bit of a lower downforce level in the second race of the season.

"It was very tricky. I don’t think there was much more I could do. I think we did everything right – the strategy, the pitstops," said Leclerc.

"We are working very well as a team. The only thing we missed was a bit of a lower downforce level."

Speaking about the next race in Melbourne, he added: "It will be interesting. It won’t require the same setup as in the past, so to adapt will be very important."

Hamilton - who secured a surprise podium in the season opener in Bahrain - has not made the start he was hoping for and the Brit has insisted there is 'a lot of work to do'.

He said: "It started getting a bit better, I started to gain on the guys ahead. It was a really good stint. I was feeling good at that point but then it all hit the fan when the cars were stopping.

"I got one point at least. We both got points for the team.

"Not much has changed since the last race but it has only been a few days. I couldn’t keep up with the Haas at the end. We have a lot of work to do for sure but I have a great team."

Despite failing to register a point yet this season, Daniel Ricciardo remains positive ahead of the Australian GP, saying: "We still have a lot to go, but certainly some progress which is nice."

Will there be any changes from the Saudi Arabian Grand Prix?

Four-time world champion Sebastian Vettel is expected to return to the grid after missing the first two races of the season after testing positive for covid-19.

Nico Hulkenberg replaced him for the Aston Martin F1 team, but Vettel is now set to be back for Melbourne.

Meanwhile, it is thought that Mick Schumacher could return after he missed the Saudi Arabian Grand Prix after suffering an awful crash during Q2 of the qualifying session in Jeddah.

Although Schumacher was physically well and was released from the hospital, he was withdrawn by the Haas F1 team for the race in Saudi as a precautionary measure.