Over 10,000 people sign petition to have Antrim man shortlisted for BBC Sports Personality of the Year

It's funny how the world of motorsport seemingly operates in another sphere.

That's through no fault of their own by the way - it's just ignorance in the mainstream media.

All over the planet, even dotted right across this little island of ours are these great men performing great feats but, for whatever reason, their achievements are never recognised like they should be. It's not because they're in a minority sport, it's absolutely not because of that. As a nation, we're pretty alright at blowing our own trumpets and celebrating anything that needs to be celebrated and it's not really jumping on a bandwagon when you're just giving a wonderful athlete who's shaken the world in a particular field the praise and adulation deserved.

But motorsport is different. Despite amazing successes, despite Irish men and women reaching the very top and acting as real role models for the country's youth, it never really leaves the pocket of motorsport even when freak achievements dictate that it should. And it's not right.

So here's Jonathan Rea, a 30-year-old from Larne in county Antrim, a legend already in the superbike world.

Rea, this year, became the first ever rider to win three successive WSB championships. Since joining Kawaski, he's won the Superbike World Championships in 2015, 2016 and 2017. He also amassed his 50th career win, another unprecedented record.

To put it straight, he's dominating the whole world of superbikes. 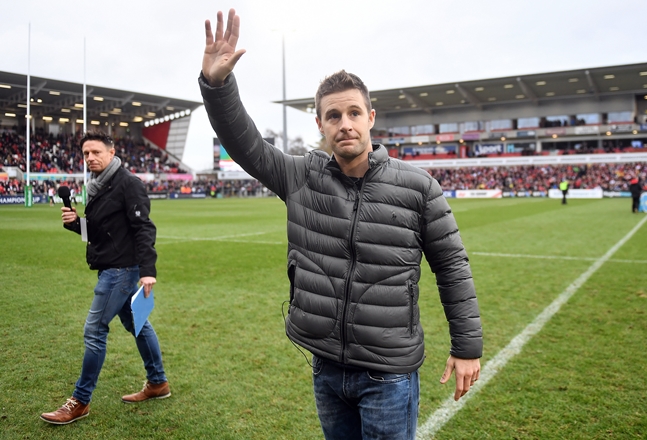 But despite all this, Rea has never been shortlisted by the BBC for a Sports Personality of the Year award. 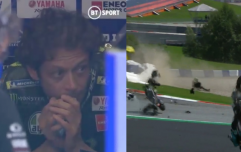 END_OF_DOCUMENT_TOKEN_TO_BE_REPLACED

When this year's show takes place on December 17, Anthony Joshua will probably walk the whole thing but it's not right that Rea wouldn't even share the esteemed company that he has earned. His name should be recognised at that level and his achievements should be celebrated.

To understand the scale of what he has done, over 10,000 people have put their name to a petition to get Rea shortlisted by the BBC for the Sports Personality of the Year awards. 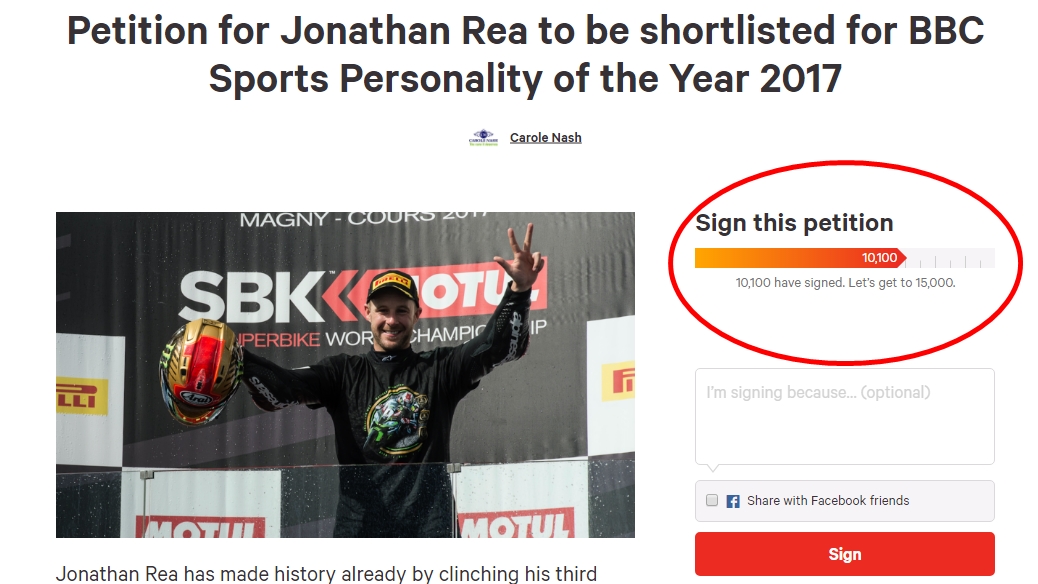 That petition was then hand-delivered into the BBC offices in Manchester with over 10,000 names on it signing for one purpose. Give a legend the recognition he deserves.


popular
'War-scene' in Tyrone dressing room before 2005 final sums up an iconic team
We knew Sean O'Brien wouldn't let us down with his Lions XV
Bill Shankly’s grandson asks for statue to be removed from Anfield
Keith Earls backed for Lions XV by one of the best in the game
The SportsJOE 12 o'clock quiz | Day 335
'Make him hurt, make him yours' - How the Springboks ruled the world
Springboks legend Tendai Mtawawira tells us what he really thinks of Ellis Genge
You may also like
4 years ago
Watch 'hugely ignorant' Venus Williams refuse grid walk interview with Martin Brundle
4 years ago
F1 driver escapes in seconds as his car erupts into a fireball at Malaysian Grand Prix
4 years ago
Michael Schumacher 'cannot walk', lawyer tells German courtroom
4 years ago
Kevin Magnussen walked away from this huge crash that caused a red flag at the Belgium Grand Prix
4 years ago
WATCH: Pair of Nascar drivers try to dig the head off of each other after collision
4 years ago
WATCH: Motorcyclists lucky to escape unharmed after terrifying fireball at Moto2 race
Next Page