UFC Welterweight champion Tyron Woodley will defend his title against undefeated Liverpudlian Darren Till in September.

Till has won his last four fights following a draw with Nicolas Dalby in his second bout with the UFC and the 25-year-old has leapfrogged interim champion Colby Covington for a shot at Woodley's crown.

Covington won the interim belt with an unanimous decision win over Rafael dos Anjos at UFC 225, however,  he recently underwent successful surgery to correct a nasal issue and should return to the Octagon by November.

As for Colby Covington, he had successful surgery today to correct a nasal issue, sources say, and will be ready to return in November. More coming on Woodley vs. Till at UFC 228 to @espn shortly. 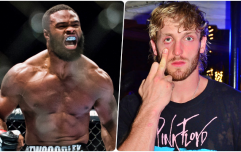 END_OF_DOCUMENT_TOKEN_TO_BE_REPLACED

Covington has not been stripped of his belt by the UFC but will concede his interim title as soon as Woodley's defence with Till begins, similar to how Conor McGregor was stripped of his lightweight belt at UFC 223 as soon as Khabib Nurmagomedov's fight with Al Iaquinta commenced.

Welterweight title is on the line in Texas! @TWooodley takes on @DarrenTill2 at #UFC228 in Dallas!
🎟 7/27 pic.twitter.com/ckWCtUItVd

The reaction to the UFC's decision to strip Covington has not been well received with many asking why let Covington fight for an interim belt if the organisation would strip him of his title just six weeks later.

You don't have to like Colby Covington to get frustrated over an interim title being introduced 6 weeks ago only to strip him of the belt because there was no plan in place for a main event at UFC 228 in September. It's ridiculous.

Woodley revealed on Tuesday that the Covington fight had never been offered to him and that he discovered that he would be fighting Darren Till through the fighter's official Twitter account.

"I found out that Colby Covington is out of the fight on Twitter through Darren Till," said Woodley on Ariel Helwani's MMA show.

"He said 'Colby's out of the fight, I'm in'. Number one, I was never formally offered Colby Covington, not only as an opponent, but I was never offered a date.

"The interim champion is 'the champion until the king comes back' belt, the 'in the meantime' belt, when did that person become the shot caller?"

“I’m getting my information from Twitter. What the f*ck is going on?” @twooodley discussed how he found out Colby Covington might be out in favor of Darren Till on yesterday’s #HelwaniShow. pic.twitter.com/OV8msQCVrt


popular
Kilmacud Crokes to counter Glen's objection over extra players in All-Ireland final
"He's a serious specimen, 6 ft 3 as well, so he's an incredible athlete" - Geaney hails O'Connor's impact
"It's very clear how I felt about it. I had a very definite view on it" - McEntee on Dunboyne's 2005 semi-final saga
Roy Keane on Man United's two most improved players since Ronaldo left
"He didn't give me that jersey back!" - Johnny Sexton on new rival Jack Crowley
January transfer window 2023: Follow the latest updates live in our hub
Roy Keane's threat to Cesc Fabregas about 'pizza incident' has panel in stitches
You may also like
9 months ago
Chael Sonnen tells Jake Paul home truths about Nate Diaz
1 year ago
Jake Paul calls out Jorge Masvidal and Nate Diaz after knockout win over Tyron Woodley
1 year ago
Fans brand Paul vs Woodley fight 'rigged' after footage of 'hand twist' gesture
1 year ago
Floyd Mayweather offers to train Tyron Woodley ahead of his Jake Paul fight
3 years ago
Kamaru Usman is the new UFC welterweight champion
4 years ago
Somebody is lying about the next UFC welterweight title fight
Next Page