UFC 201: SportsJOE picks the winners so you don't have to

END_OF_DOCUMENT_TOKEN_TO_BE_REPLACED

DM: Tyron Woodley possesses the power to knock Robbie Lawler out and the champion has been rocked in recent fights.

The toughness of 'Ruthless' can only take him so far and he will eventually come unstuck if he continues to engage in wars, as his tendency.

But I think Woodley's lay-offs make him something of an unknown. He's fought once in the last two years while Lawler has been out-gritting the best of the best at 170 lbs.

If Lawler had any bit of a weaker chin, I might lean towards Woodley starching him early but I'm anticipating 'Ruthless' stomping through everything that 'The Chosen One' throws at him and showing that champion mettle late on.

BK: If the same Tyron Woodley that defeated Kelvin Gastelum by unanimous decision a year and a half ago shows up, Lawler will win. The problem is that we don't know what the Chosen One has been getting up to behind closed doors during this period.

END_OF_DOCUMENT_TOKEN_TO_BE_REPLACED

Woodley's spent this time training while working as an analyst. He's kept his finger on the pulse of the recent evolution of the sport and how it has become a game of distance management at the elite level, and he's also been absorbing every nugget of information on Lawler's style by breaking down his fights. There is a chance that he has managed to use this time to perfect a gameplan to dethrone the champ, but we can't know this for sure.

The outcome of this fight depends on what Woodley shows up, but you get the feeling that the longer this fight goes on, the greater the chance that Lawler will be walking away from the Octagon with that belt wrapped around his waste again.

Lawler via KO (round four) 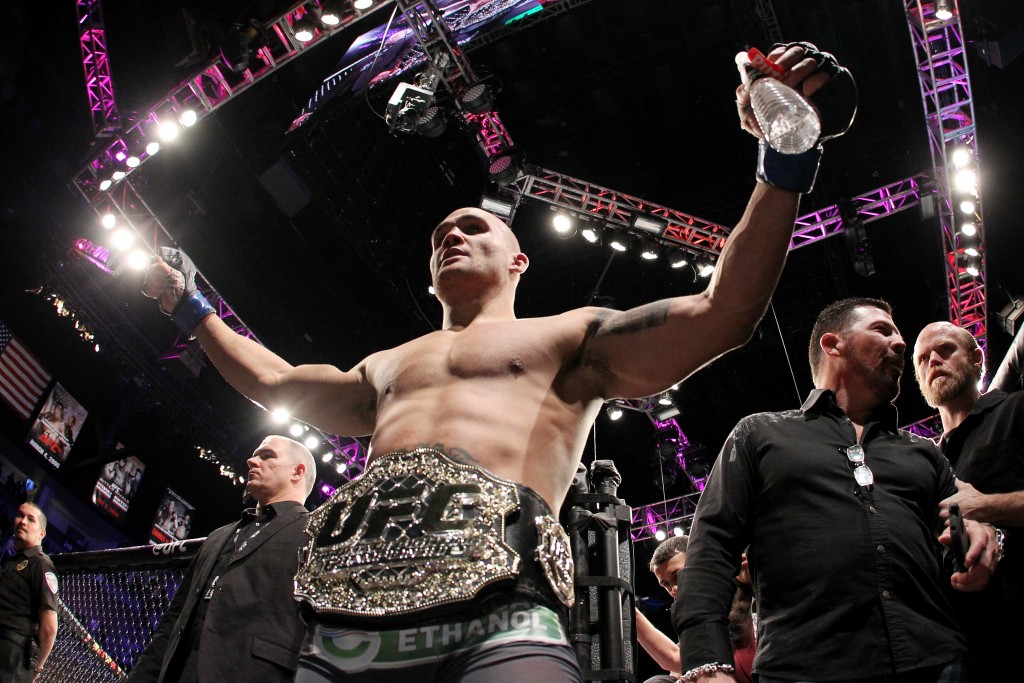 END_OF_DOCUMENT_TOKEN_TO_BE_REPLACED

DM: Like her TUF 20 stablemate Felice Herrig recently showed, it seems as though Rose Namajunas has finally leaped over the mental hurdles that prevented her from reaching her potential early on in her career.

I really can't point to an area in which either Namajunas or Kowalkiewicz is lacking but am just going off who has looked better in recent fights and, to me, that's 'Thug' Rose.

Namajunas could well be the most athletic competitor in the strawweight division and, to add to her sublime Taekwondo game, she's got that point karate style of distance control that seems to be all the rage nowadays.

It's working for 'Wonderboy', it's working for Michael Page and I think Namajunas will just be able to get in and out better on her way to a decision.

BK: The talent pool in the women's strawweight division is still a bit shallow. That is to be expected from a division that is so young. While this means the matchups tend to be quite exciting, the unfortunate by-product of this is that you often get two hot prospects facing each other, such is the case for this fight.

I'm leaning towards Kowalkiewicz, because the undefeated Pole will have a stark advantage in terms of experience. She has really impressed me inside the Octagon since entering the big leagues as the former KSW champion. I think her reactive and innovative striking style might get her the win, but hopefully whoever wins here will get a couple more fights under their belt before getting a crack at Joanna champion.

DM: Have to say that I can see this being Ellenberger's final fight.

Sure he can hit hard and Brown doesn't have the best defensive shield but the ability of 'The Immortal' to weather the early storm is a massive factor here.

He could well get rocked by Ellenberger in the opening round but there are few fighters who possess a heart like Brown's. He recovers well by clinching and, once he gets in close, he rearranges feature with his elbows and knees.

Brown via TKO (round two)

BK: Matt Brown's an animal. Unless Ellenberger can find home with a seismic haymaker or can go to work on the canvas, this is Brown's fight to lose.

Brown via TKO (round two)

DM: Francisco Rivera is a cleaner striker, a harder hitter and the more powerful man.

Perez flourishes in a dogfight but I can see him being put to sleep here.

Rivera by KO (round two)

BK: You can never count Rivera out, he has that ability to beat just about anyone on his night. I just feel that Perez is that little bit more well-rounded and consistent though. Rivera is under a bit of pressure to get a win and some job security. We'll find out how he copes with that kind of pressure come fight night.

DM: This should be good fun but not as good fun as the scrapped Ian McCall vs. Justin Scoggins.

Serrano is a solid wrestler but Benoit is no slouch himself and should be able to hold his own in that department.

Benoit's all-action pressure game and his undeniable knockout power means that any shots from Serrano will have to perfectly set up but I don't see Benoit granting him that time or space.

BK: *This is Darragh*

Ben was "hammered at a wedding in Limerick" when McCall vs. Scoggins was scrapped so took a shot in the dark with Ryan Benoit.