Will Fleury wanted to prove his resilience and he most certainly did that.

When put to Tipperary's Fleury that he was in good hands with John Kavanagh after his first career defeat last July, he assured me that he didn't need any outside motivation.

Fleury earned his first Bellator win on Saturday night, when one of the world's top mixed martial arts promotions set up shop in the 3Arena for Bellator 217.

END_OF_DOCUMENT_TOKEN_TO_BE_REPLACED

Taylor engaged with an takedown attempt and referee Kerry Hatley didn't take kindly to Fleury's defensive elbows and while the Scot's gameplay was clearly to wrestle, it was Fleury who enjoyed the better of the exchanges in the grappling department as he finished the opening round in top position, raining down ground and around to close out a fruitful five minutes.

And it was in the grappling department that the fight was ultimately decided when Fleury saw a glimmer of an opening and cinched up a vice-like rear naked choke out of nowhere in the second round. 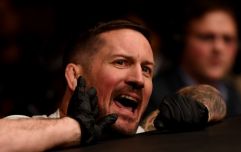 END_OF_DOCUMENT_TOKEN_TO_BE_REPLACED

Straight Blast Gym's Fleury made it clear since weigh-in day that he doubted his opponent's professionalism after Taylor weighed in a whopping 5lbs over the middleweight limit.

'The Lion of Tipperary' doubled down on that in his post-fight interview before proclaiming himself the best middleweight in Ireland and making clear his desire to prove himself the best 185lber in Europe.

And considering how well he rebounded from his only career defeat, it's not hard to foresee a scenario in which Fleury is competing for that honour before the year is out.


popular
Gary Neville sticks up for Ronaldo as contextless pictures and videos taken as gospel
World Cup 2022 Day 18: All the major action and talking points
Rory McIlroy explains 'falling out' with Shane Lowry that lasted a few years
Brazil star responds after Roy Keane slates dancing celebrations
Cristiano Ronaldo's sister blasts Portugal boss' decision to start forward on the bench
Eniola Aluko responds to criticism after on-air mistake on ITV
Ballyhale's Colin Fennelly felt Ballygunner's victory speech was disrespectful
You may also like
3 years ago
Bellator confirm quick return to Dublin
3 years ago
James Gallagher reacted furiously to Bellator official trying to separate him from his mother
3 years ago
Biggest grudge match in Irish MMA history ends in victory for Myles Price
3 years ago
James Gallagher does even better than he predicted as he returns to winning ways
3 years ago
Charlie Ward takes prelim anger out on opponent with show-stealing left hook
3 years ago
Richard Kiely said he was the best striker in Bellator, then he did this
Next Page