Peter Queally has been slated to fight the man for the past two months, but he still shakes his head as he considers his upcoming Bellator Dublin bout against Benson Henderson.

'The Showstopper' is taking on Henderson - a former UFC star with career wins over Nate Diaz, Jorge Masvidal and Frankie Edgar [twice] - at the 3 Arena, on Friday night. It is the first time Queally will have fought since losing a lightweight title bout against Patricky Friere, at the same venue, last November.

END_OF_DOCUMENT_TOKEN_TO_BE_REPLACED

We caught up with the Waterford native [13-6-1] a few weeks out from his main event bout with Henderson and he spoke out how he switched hurling for MMA, a wild fight in Kazakhstan, helping the next generation of Irish fighters and how much John Kavanagh means to him.

"He really has changed my life," Queally says. "He's not just my coach; he's a friend.

"I know him about 15 years, now. Would I be where I am without John? I don't think so. I always say that when I first got to John, and Straight Blast Gym, in 2010, I didn't have a bean in my pocket. I had no money at all. I couldn't even afford fees. His sister used to help run the gym, back then, and I was always ducking and diving from her - 'I'll pay next month', 'I'll get you next time' - knowing I'd never pay.

"Eventually John stepped in and said, 'He doesn't have to pay. Just let him go. I don't know whether he felt sorry for me, saw potential in me, or what it was, but thank you, John. I definitely couldn't afford that €80 back then. That's how broke I was." 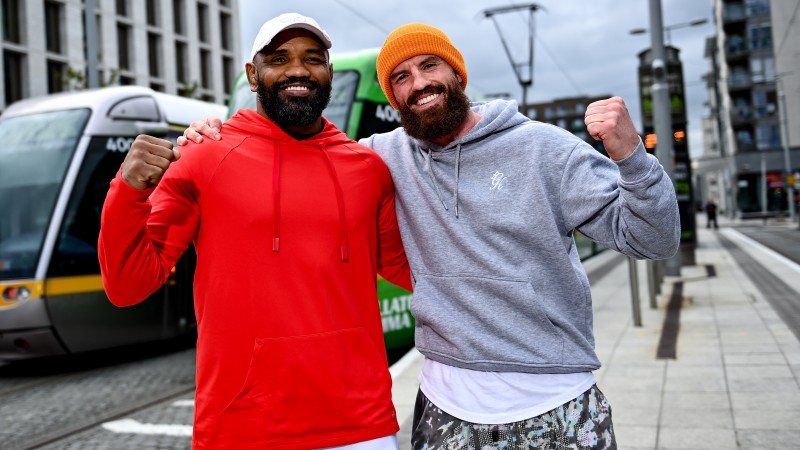 END_OF_DOCUMENT_TOKEN_TO_BE_REPLACED

While Peter Queally has been on the main card of his four previous Bellator events - after a career that has included Cage Warrior, Venator and BAMMA bouts - this is his second main event in the promotion.

He earned that first main event, and title, shot by defeating Patricky Friere at Bellator 258, in Connecticut. The Brazilian avenged that loss in Dublin, late last year, but a win over an esteemed and respected veteran like Benson Henderson would put him back in the title picture.

END_OF_DOCUMENT_TOKEN_TO_BE_REPLACED

It is a long way from days and nights spent living out of his car, in Dublin, as he made the transition from being a hurling hopeful to an MMA nut. "It started as a past-time but I loved it," he says, "and it just grew from there. Next thing you know, I'm living out of my car in front of John Kavanagh's old gym."

"I moved up to Dublin about 12 years ago, and I used to stay in my cousin, Mike's tiny apartment, on Cork Street. You'd have to share a bed. The nights that his girlfriend would be about, and not want me there, I'd have to sleep in my car."

Queally was a 9-3 fighter, going between lightweight and welterweight, in 2016 when he started gaining traction on the Fight Nights Global circuit. He was 1-1 in that promotion when he experienced his craziest fighting experience, on the road.

"The most atmospheric place I fought in was Almaty, in Kazakhstan," he tells us.

"I fought in a 15,000 seat arena that was packed out and I was up against Kuat Khamitov, who was a local hero... it was wild. It was a scary experience; very intimidating.

"What made it worse was, I got a really bad flu, not long after we landed... I was so sick that I was on I/V antibiotics. They changed the weight class, up one, so I didn't have to try and cut weight, because I was so sick. But they were not having it that I wasn't going to fight, so I had to go in there. I felt awful - chestful of phlegm, couldn't breathe - but I went in. It was a five-round main event and, of course, it went the full five rounds. It was tough, but it was a great experience."

At the time, Kuat Khamitov was awarded the win, but the MMA Union went back over that call and it was recorded as a majority draw.

This Friday, Peter Queally gets the blue gloves and he comes out second.

He wants Dublin to be as intimidating and raucous for Benson Henderson as Almaty was for him.

"I'm coming out second, so that means the fans can sing 'Zombie' over Benson's song, and that'll be all he hears. It's going to be brilliant. I can't wait."

*Peter Queally headlines Bellator 285 at the 3 Arena in Dublin, on Friday, September 23


popular
Ireland team to play Wales: Andy Farrell's XV, the big calls and bold cuts
Roy Keane reminds everyone of his feelings towards Newcastle United ahead of cup final against Man United
Everton release brutal 59-word statement to confirm Anthony Gordon departure
Ireland's self destructive mentality kills Croke Park fight for Katie Taylor
Even Roy Keane felt Michael Dawson went too far with his remark to Tom Heaton
True beauty of Fitzgibbon and Sigerson Cups lies in the hearts of weaker counties
Five confirmed changes and guidelines to have big impact on 2023 Six Nations
You may also like
3 years ago
James Haskell responds to MMA call-outs by Neil Best and Andy Powell
3 years ago
James Gallagher set to headline Bellator show in Dublin
3 years ago
'I really think that me and Ben Askren are gonna fight' - Dillon Danis
3 years ago
'Bellator has a Dublin show in September so I'm thinking of bothering them about it' - Heather Hardy
3 years ago
'Katie's an Olympic gold medallist who unified the belts but is not getting paid like a man'
3 years ago
Conor McGregor proved Dillon Danis' inspiration after awful knee injury
Next Page