Fleury rebounded from his shock defeat in his promotional debut with a near-flawless performance against Shaun Taylor on Saturday night, cinching up a rear naked choke in the second round of the clash at Dublin's 3Arena.

But something that few realised as Fleury prepared for the most important fight of his career is that the Tipperary man had suffered a serious shoulder injury just three months before fight night.

END_OF_DOCUMENT_TOKEN_TO_BE_REPLACED

The injury occurred on November 12 last year, when Fleury was sparring with Aaron Quinn in preparation for a bout with Brave CF, and doctors initially plunged his immediate fighting future into jeopardy as the SBG middleweight was told he would need surgery and a lengthy rehabilitation programme.

Fleury explained: "We were sparring, doing fight simulation in the build-up for a fight I had booked in South Africa. I shot in on a double leg and switched to a single leg, I was pulling him down and his undertook came up. As we were both coming down, both of our body weight landed on my elbow and the pressure just shot up into my shoulder.

"I found out later that I had broken off a bit of my glenoid and dislocated my shoulder but when I planted my elbow, the shoulder popped back into place. Then when I threw an uppercut on the break, it dislocated again. It was out, in, out.

"The doctor said that I had to have surgery, no matter what. He said I didn't really have a choice but I went and researched it myself and thought I could get by with rehab. The surgery window was six months and then it would take another three or four to fully heal to the point that I could fight. But then there's the danger that my shoulder would never have been right so I did it my way.

"The way it healed, it took a hell of a lot of rehab and it wasn't until mid-January that I was able to throw punches at 100 per cent again.

END_OF_DOCUMENT_TOKEN_TO_BE_REPLACED

"I didn't panic though. I was still on track and had done so much research that I had complete confidence in my body.

"I didn't tell Bellator. Only John and a few people in the gym knew but I put the shoulder through everything I needed to. There was plenty of grappling rounds and I had a couple of spars on it. I'll admit that there were times when I was driving or in bed and it'd slip a little bit and it was in moments like that that I'd get a bit worried but I had such mental strength that it was going to work out. I believed it, I bought into it and I knew I had done everything right."

The scan and doctor’s report show that the Tipp man was facing an uphill task to make it to fight night. pic.twitter.com/VoTvQjJ2Sg

END_OF_DOCUMENT_TOKEN_TO_BE_REPLACED

Fleury admitted that while the injured shoulder might not be quite as flexible or mobile as his other one, he had no reservations when it came to discussing the severity of the injury now that he has returned to the win column with a clean bill of health.

"I was talking to my strength and conditioning coach this morning and telling him that I was going to talk to you about my injury," Fleury continued. "He didn't see the point in making it public but I have full faith that it has recovered to the point that no future opponent would be able to exploit it.

"It's 100 per cent. I was benching 100 kilos this morning and there was no pressure on the shoulder at all."

After a strenuous training camp, Fleury almost had his comeback fight taken away from him when his opponent badly missed weight last Friday.

Taylor came in at 190.4lbs at the weigh-ins at the Spencer Hotel, leading Fleury to wonder how seriously he took the cut.

"I was kind of questioning whether he even tried to make the weight," he said. "You saw me looking at him and I was wondering where this weight was coming from because he's much smaller than me. Basically that conversation consisted of him agreeing to give me 20 per cent of his purse. I asked the commission if I could get more than 20 per cent because of how much he missed by but they said no. 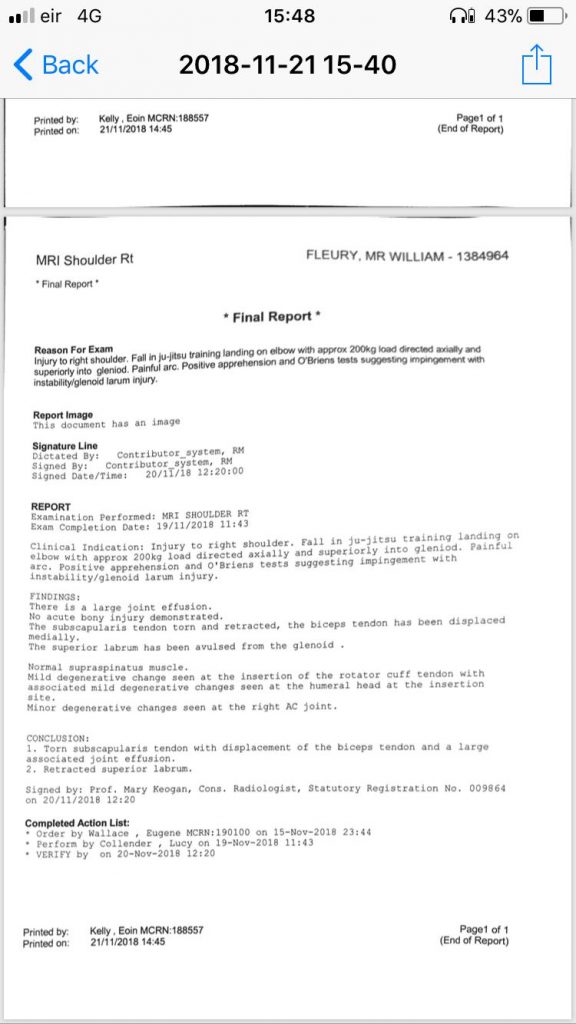 "I'm not sure he wanted this that much. I think he might have come in overweight on purpose because I reckon a lot of my pre-fight build-up probably got to him and he realised I was legit as fuck. I think he panicked a bit and thought that if he came in heavier than me then he'd at least have one advantage.

"It always seems to be something with my opponents. Something about me scares them.

"Jude (Samuel) rang me as I was walking down to make the weight and I didn't want to answer because I was afraid of what he was going to say. I thought Shaun might be pulling out or whatever. So I was actually kind of relieved when I found out that he just missed the weight."

Fleury, who was told before his bout that the announcer would not be referring to him by his preferred nickname of Will 'Fuckin' Fleury, will now be introduced as 'The Lion of Tipperary' for his bouts under the Bellator banner which makes sense given the promotion's landmark broadcast deal with Sky Sports.

The 29-year-old is now targeting a summer clash against some big names before a return to Dublin in September.

"I'd like to fight in London in June," Fleury said. "Ideally, I'll get an American opponent. Someone like Joe Schilling or even 50 Cent if he really wants it.

"Then I'll hopefully get back in the cage by Autumn when Bellator comes back to the 3Arena."


popular
When Liam Brady lit into Brian Clough for his dismissive Mick McCarthy comments
Roy Keane pays Declan Rice highest compliment possible as United move discussed
Galway fans' frosty reception for Davy Fitz doesn't make any sense
"I'm pretty angry... Kane's body language and performance, oh my goodness!"
Roy Keane and Graeme Souness had plenty to say about David Moyes' crucial penalty decision
Phil Jones fires back at "really poor" Rio Ferdinand comments
Solskjaer makes fair point as Ronaldo denied two 'stonewall penalties' at West Ham
You may also like
2 years ago
James Gallagher set to headline Bellator show in Dublin
2 years ago
'I really think that me and Ben Askren are gonna fight' - Dillon Danis
2 years ago
'Bellator has a Dublin show in September so I'm thinking of bothering them about it' - Heather Hardy
2 years ago
'Katie's an Olympic gold medallist who unified the belts but is not getting paid like a man'
2 years ago
Conor McGregor proved Dillon Danis' inspiration after awful knee injury
2 years ago
Dillon Danis calls out Jon Jones after impressive Bellator victory
Next Page