The kick from Holly Holm that ended Ronda Rousey's UFC title reign is still being felt a month after the fight.

The poster girl of female MMA was knocked out cold by the devastating neck kick that ended UFC 193's prime time show last month in Melbourne.

At the time it was feared that Rousey's jaw had been broken, but it was later confirmed that she hadn't suffered a fracture. 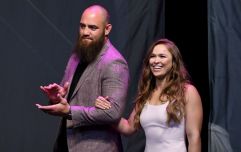 END_OF_DOCUMENT_TOKEN_TO_BE_REPLACED

She may not have a technically broken her jaw, but in an interview with ESPN magazine, it's being reported that her teeth are in bits and she may even be able to eat an apple for six months.

People.com have managed to get a sneak peek at the interview, and according to the magazine, this account of how painful Rousey's jaw is should make anyone wince,

"The stitches in her lip still dissolving, and a few of her teeth still unstable from Holm's fight-ending kick to the face."

"It might be three to six months before I can eat an apple, let alone take an impact."

Rousey faces a long time out of the sport and admits that she is really 'f**king sad' after her loss to 'The Preacher's Daughter' last month.

We're not surprised and her food is probably going to have to be pulped up for a while yet.

And just before Christmas too.