We should point out that this almost certainly won't happen.

Mayweather Promotions CEO Leonard Ellerbe insisted that there would be no mixed martial artists competing on the undercard of the August 26 super-fight between Conor McGregor and Floyd Mayweather.

Ellerbe made the statement on Monday's edition of the MMA Hour, with fighters from Mayweather's stable likely to pad out the build-up to McGregor's boxing debut against one of the greatest of all time. 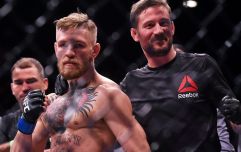 END_OF_DOCUMENT_TOKEN_TO_BE_REPLACED

But if there was a UFC fighter who you'd think could at least hang in the boxing ring, it might just be Nate Diaz.

Diaz is a regular sparring partner of pound-for-pound king, Andre Ward, and has some of the best hands in MMA.

He's spoken at length about his refusal to fight below his value and Diaz's reaction to the confirmation of McGregor vs. Mayweather tells you exactly what he thinks about the match-up.

"It's gonna be a good fight for that #2 spot," Diaz wrote on Instagram last week.

There is a lot more money to be made at the pinnacle of boxing than there is in the UFC and Diaz seems to have an official offer on the table from former four-weight world champion, Adrien Broner. 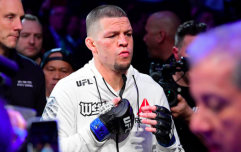 END_OF_DOCUMENT_TOKEN_TO_BE_REPLACED

Broner is set to take on Mikey Garcia at the end of July, four weeks before the McGregor-Mayweather card but, pending a clean bill of health, 'The Problem' would be open to welcoming Diaz to the boxing ring.

"Y'all sit up and say McGregor's going to beat Floyd. This boxing game's crazy!" Broner said.

"So after this fight, I just feel like, if I come out untouched, I feel like I'm going to be victorious...

"I feel like I should come back and fight on Floyd's undercard against Nate Diaz." Nate Diaz vs. Jorge Masvidal is back on after USADA ruling

END_OF_DOCUMENT_TOKEN_TO_BE_REPLACED

In January, Diaz announced that he would be applying for a boxing licence in Nevada and while little has been mentioned about that since, one would imagine that he would have no problem getting licensed if the money was right for the commission.

As we say, we can't see this happening, due in no small part to the fact that Diaz is significantly larger than Broner, who most recently weighed in at 146lbs. Diaz, meanwhile, has never competed any lighter than 155lbs and has fought as high as 170lbs.


popular
"I remember someone saying, 'This guy's the best of the lot of them. Just wait for him'" - Brian O'Driscoll
"I trained with a guy that was born in 2004 the other day. We reckoned Earlsie could be his father!" - Peter O'Mahony
Nigel Owens on most annoying players to referee (three of them are Irish)
The story of the GAA's greatest ever minor
Six All Blacks but no Ireland players in world's top 20 list headed by Antoine Dupont
Longford GAA movie explores the tale so many young footballers can relate to
"I asked one question and lads slagged the arse off me!" - Johnny Sexton on Roy Keane chat
You may also like
2 years ago
Dana White confirms UFC are commissioning one-off belt for Diaz vs. Masvidal
2 years ago
'Let's give the fans a fight they want to see - two dogs locked in the cage'
2 years ago
"Nate, you know what I’m like when I get going. Vicious."
2 years ago
Nate Diaz calls out "gangster" Jorge Masvidal after beating Anthony Pettis
2 years ago
Conor McGregor in line to fight Nate Diaz at Madison Square Garden in November
2 years ago
Nate Diaz details the time he slapped Khabib Nurmagomedov
Next Page