'JJ' has gone from one of the best pound-for-pound fighters in UFC history to a person desperately in need of a break from the sport.

First, Ronda Rousey and now Joanna Jedrzejczyk. The former titans of their respective UFC weight divisions have been proved to be human.

Jedrzejczyk may have lost out on a chance to claim the flyweight belt - losing to Valentina Shevchenko at UFC 231 - but she has shown others out there how to deal with defeat.

For years, the Pole was untouchable in the strawweight division and raced to a 14-0 career record. Along the way, in March 2015, she claimed the 115lbs belt by defeating Carla Esparza and defended it five times over 26 months.

She looked set to reign supreme in her division for years to come until she was taken apart by Rose Namjunas at UFC 217. The rematch took place at UFC 223, days after the Conor McGregor bus attack incident in Brooklyn, and Namajunas retained her title on points.

Within the space of 154 days, Jedrzejczyk had gone from champion to a fighter with two defeats on a previously unblemished record.

She rebounded, in July, with a unanimous decision win over Tecia Torres and was then booked in for a fight against Shevchenko for the vacant flyweight belt. Ahead of the contest, she told reporters that there were no second places in MMA but that did not make the person who did not win 'a loser'.

The 31-year-old would have much preferred to back those comments up with a title win but Shevchenko picked her off well and landed the most telling blows and takedowns. In the end, all three judges scored the fight 49-46 to the Ukranian.

Not for the first time after a bitter defeat, Jedrzejczyk fronted up for post-fight media duties.

Taking a seat at the press conference, she removed sunglasses to show off some damage to her eyes and nose. 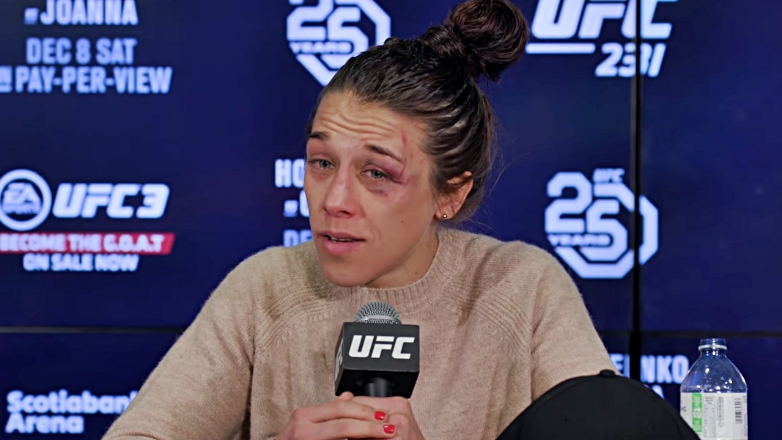 Not for the first time, too, she spoke remarkably well:

"I'm looking forward. It was my first fight in the flyweight division and right away I had to fight with such a tough opponent, in Valentina, and for the belt.

"I'm happy, I'm proud of myself. I broke Ronda Rousey's record of title fights [before] and.. that's it. I must take some time off. I will speak with my coaches and Dana, and decide what is going to be the next step...

"[As for a rematch], we will see. There are a lot of other good fighters out there in the flyweight division... I will see. I will take some time and go for my other dream, getting the belt in the strawweight division."

The Pole is very much aware that the clock is ticking on Namajunas to defend the belt she won in April. Namajunas took some time off to recover from injuries but Jessica Andrade is ready and waiting for a shot at the belt.

UFC president Dana White, meanwhile, urged "my friend" Jedrzejczyk to take some time away from the sport, go back to Poland and come into 2019 refreshed and ready to rebuild her legacy.


popular
QUIZ: Name every player that's scored three or more Premier League hat-tricks
The SportsJOE 12 o'clock quiz | Day 109
"Some of the guys have put a lot into it" - Felipe Contepomi confident Leinster can start fast
'ROG was the kingpin... he just wanted to win, win, win' - Barry Murphy
QUIZ: Name the country these football teams play in
SportsJOE 2000s Football Quiz | Round 9
"It's too experimental" - Kenny's team for Slovakia showdown begins to take shape
You may also like
1 month ago
Justin Gaethje tells Conor McGregor to wait his turn
1 month ago
McGregor the fighter just couldn't help himself
1 month ago
"I'll go to Ireland; do what I gotta do" - Gaethje has plans for McGregor after title fight
1 month ago
Justin Gaethje demolishes Tony Ferguson to claim interim title
1 month ago
Donald Cerrone loses fourth fight in a row amid eye-poke controversy
1 month ago
Jacare Souza pulled from UFC 249 after positive Covid-19 test
Next Page