If ever you needed proof that taking one of Gabi Garcia's muscular fingers to the eye wouldn't be the most pleasant experience, look no further.

10x Brazilian Jiu-Jitsu world champion Gabi Garcia made it two No Contests in two fights last month with both bouts ending because of fouls she committed.

Earlier in July, Garcia annihilated her much smaller and much older opponent Megumi Yabushita with an illegal soccer kick. She was well on her way to scoring an emphatic victory over the 45-year-old, but the contest won't go down in the win column because of the foul. 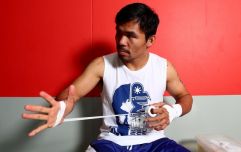 END_OF_DOCUMENT_TOKEN_TO_BE_REPLACED

At the weekend, we saw something unusual. Garcia actually took on someone who wasn't at a massive weight disadvantage when she faced former boxer Oksana Gagloeva, who made her professional MMA debut.

However, the bout ended before it ever really began. In the very first exchange, Garcia's fingers went straight into her opponent's eye socket and that was all she wrote. Another July fight for Garcia, another No Contest.

Garcia labelled Gagloeva a coward for not wanting to continue the fight, but after seeing the damage that was done to her eye, it's hard to blame her for being unable to carry on.


popular
"This game is going to get abandoned" - Mass brawl between Kilcoo and Burren results in six red cards
"He'll have the best seat in the house" - emotional Mageean pays tribute to late great Kiernan after the race of her life
Teddy Sheringham says Roy Keane didn't speak to him for three years at Man United
Quiz: Which player has scored more goals for Ireland?
Court hears cringeworthy poems Ryan Giggs wrote to his ex
Kylian Mbappé wants to 'dismantle Argentine Republic' at PSG
Your guide to a huge weekend of sport and how to watch it all
You may also like
3 years ago
Rules announced for Floyd Mayweather vs. Tenshin Nasukawa
4 years ago
Ian McCall's horrendous spell continues with heartbreaking doctor's stoppage
4 years ago
Gabi Garcia's apology for missing weight by staggering amount was uncomfortably emotional
4 years ago
UFC veteran trades blows with opponent at weigh-ins
4 years ago
John Kavanagh adds his voice to condemnation of absolutely ridiculous MMA fight
4 years ago
Man attacks Gabi Garcia after she books another fight against vastly smaller old lady
Next Page