Manny Pacquiao will not be following Floyd Mayweather's example with an exhibition bout in RIZIN FF. Not yet, anyway.

Fight fans' curiosity was piqued over the weekend when RIZIN president Nobuyuki Sakakibara tweeted photographs of Pacquiao signing a contract with the Japanese mixed martial arts promotion and many believed he was going to do exactly what Mayweather did by securing a lucrative payday for a short night's work.

But Sakakibara has since clarified the deal he agreed with the boxing legend, revealing that Pacquiao has signed on to accept an "ambassador role for Filipino fighters to get bigger opportunities."

I’m here in the Philippines. RIZIN.15 will have this man involved in a way. We will be ready to announce as I get back to Japan! #rizin15 #MannyPacquiao pic.twitter.com/58lv5xwPMb

END_OF_DOCUMENT_TOKEN_TO_BE_REPLACED

Pacquiao will apparently be in Fritz Biagtan's corner for RIZIN 15, when Biagtan fights Tenshin Nasukawa, the Japanese kickboxer who was knocked out by Mayweather in their exhibition bout at the turn of the year.

"This is not a fight contract," Sakakibara reiterated, via MMA Fighting. "This agreement was made based off of Manny Pacquiao supporting the young Filipino fighter who will be fighting Tenshin Nasukawa." 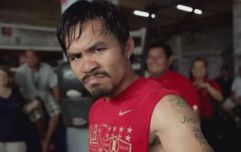 END_OF_DOCUMENT_TOKEN_TO_BE_REPLACED

While Sakakibara revealed that Pacquiao would not be competing later this month, he did not rule out seeing 'Pac-man' take part in an exhibition bout at some stage in the future, against none other than UFC and Pride legend Takanori Gomi.

"I would (definitely) be interested in talking to Manny about a possible exhibition match, but we are not quite there yet," Sakakibara added. "But if it happens, I don’t think it would be against Tenshin. We learned a lot from dealing with Mayweather. If anybody were to fight Manny in an exhibition, it would have to be Gomi."


popular
"How long does this go on for?" - Damien Delaney challenges Stephen Kenny's record
Roy Keane wasn't having Ronny Johnsen's lovely gesture in Man United legends game at Anfield
James McClean's battle with John McGinn worth the attendance fee alone
Ireland player ratings as Stephen Kenny's team lose 2-1 to Scotland
Liam Brady questions Stephen Kenny's decision to substitute Michael Obafemi in Scotland loss
Paul O'Donovan briefly breaks character in remarkable gold medal interview
"It is hard, especially when you’re 18 and I’d never left Ireland by myself," - Tuohy reflects on tough days after Grand Final win
You may also like
5 months ago
Ricky Hatton confirms that he will be returning to the ring 10 years after his last fight
1 year ago
Professional boxing is on its knees and it might be too late to save it
1 year ago
Manny Pacquiao struggles to open his eyes after brutal boxing defeat
3 years ago
Manny Pacquiao agrees mystery deal with MMA promotion that paid Mayweather $9 million
3 years ago
Adrien Broner gives controversial post-fight interview after loss to Manny Pacquiao
3 years ago
Eddie Hearn expects Mayweather vs Pacquiao rematch to be announced this weekend
Next Page