Even if you have never trained in boxing or mixed martial arts, there's a small part of all of us that wonders us what it would be like to make the walk to the ring or the cage.

You often hear fighters talk about just how real a fight becomes when you step through the ropes or when the cage door shuts, but few have painted the picture as vivid as Donald 'Cowboy' Cerrone before his first round win over Yancy Medeiros at UFC Denver on Sunday.

“This is what I love,” Cerrone told MMAjunkie. “I love fighting. It’s the scariest, most intense, fun feeling. I couldn’t even explain it to you.

"From right now, (I) can’t sleep at night, eating’s hard, make the weight, half the battle’s over. Fight day, (expletive). All your friends are like, ‘You’re going to kill him!’ Uh, no, (expletive). I’ve got to go in there and fight. It doesn’t just go like that. Scared. Pack your (expletive). We’re in the arena. All your teammates are fighting. Your coach is there.

“It’s crazy. It’s scary. You go throw up in the bathroom – I do anyway. Then you’re standing, and you walk down the hall with (expletive) lights in your face. Now you’re live on TV. You walk down that tunnel, and you’re like, ‘Holy (expletive).’ Six weeks (of training camp), and it’s here, and it’s now.”

A win would have seen Cerrone amass a total of 20 victories in the UFC, tying the record held by Michael Bisping and Georges St-Pierre, while a finish would see him equal the record of 14 set by Anderson Silva and Vitor Belfort. 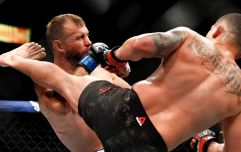 END_OF_DOCUMENT_TOKEN_TO_BE_REPLACED

Despite all these reasons to get the win at all costs, and despite Medeiros causing some trouble with his stand-up in the early exchanges, when the Hawaiian slipped to the canvas, he was let back up. Medeiros got back to his feet laughing at the sportsmanship, and the two high-fived and hugged it out before going back to war.

Before the end of the round, karma rewarded Cerrone. The fight-ending sequence began with a vicious combination that cut Medeiros' legs out from under him. The right hand stumbled him backwards and saw him fall face-first onto the canvas. A few punches from the top position later and Herb Dean had seen enough.

Buzzer Beater! Cowboy Cerrone crumbles Yancy Medeiros right at the end of the first round for the win! #UFCAustin https://t.co/FNKDO2M4PZ


popular
The SportsJOE 12 o'clock quiz | Day 108
QUIZ: Name every player that's scored three or more Premier League hat-tricks
QUIZ: Name the country these football teams play in
Na Piarsaigh's coaching set-up a juvenile's dream
QUIZ: Can you name all of these 1990s GAA stars?
The SportsJOE 12 o'clock quiz | Day 107
SportsJOE 2000s Football Quiz | Round 9
You may also like
2 months ago
"Donald showed up; Cowboy wasn't there. The wrong guy showed up"
5 months ago
Conor McGregor demands apology from ESPN pundit over Cerrone comments
5 months ago
"I saw a guy that looked like he didn't want to be there for some reason"
5 months ago
Jorge Masvidal and Justin Gaethje likeliest options for McGregor
5 months ago
Conor McGregor on his post-fight comments to Donald Cerrone
5 months ago
McGregor on John Kavanagh's instructions just before he finished Cerrone
Next Page