Covid-19 and the tale of two UFC legends fighting the good fight while trying to fight against themselves.

Conor McGregor and Stipe Miocic are doing their part, and more, during the Covid-19 pandemic.

McGregor [aside from his own brand of public service addresses] has made a number of generous donations to frontline workers and both sought out and bought Personal Protective Equipment for them to use. He continues to make donations to First Responders in the United States too.

Miocic, as a part-time firefighter paramedic and first responder in Ohio, has been helping out on the frontline in a state that (as of today) has had 24,787 confirmed Covid-19 cases and 1,360 related deaths.

Both McGregor and Miocic are true-and-true fighters but were both willing to put aside that significant side of their lives to stay at home as much as possible and following public health advice. McGregor, for one, was not satisfied with Ireland not going into a full lockdown that included shoring up the island and not allowing travel into the country. Back in March, he declared:

"True lockdown must begin, and it must begin now. A lockdown together, a lockdown united."

Not long after that, McGregor was very honest when giving his opinion on the UFC's ill-advised plans to press ahead with a pay-per-view event at a casino resort in Northern California, and their plans to hold events an an undisclosed 'Fight Island'.

'At the beginning of all this,' he tweeted, 'I said to myself - I’m happy I don’t have an official fight booked. If I did, I would have consumed all the incorrect data to support me taking part in the bout, and I would have followed through, competed. And won.'

END_OF_DOCUMENT_TOKEN_TO_BE_REPLACED

McGregor was thankful he was not booked in for a fight and most right-minded individuals were thankful when ESPN stepped in to postpone UFC 249 a few weeks. The event still happened on May 9, this time in Florida, but the promotion at least had a few more weeks to put better testing and social distancing measures in place. The fact that three people who travelled to Jacksonville for UFC 249 tested positive for Covid-19 will tell you how hasty it is to be pressing ahead with sporting commitments.

By April 27, a fortnight before Justin Gaethje defeated Tony Ferguson at UFC 249, 'The Notorious' was eager for the 2 kilometres from home restrictions to be relaxed [by May 5, he requested]. 'Only so long our hands can be held before we must go it solo,' he declared.

He wished all of the competitors, and staff present, at UFC 249 the best and sat back to watch what was an enthralling fight card. UFC lightweight champion Khabib Nurmagomedov congratulated Gaethje, via Twitter, that night but McGregor held his counsel. On Monday, though, he could not help himself.

What followed were seven tweets where he lambasted Nurmagomedov, derided Ferguson and Dustin Poirier and threatened to "butcher" Gaethje. 'Your teeth,' he wrote. 'I'm going to put them on a ****ing necklace.'

Believing that Nurmagomedov will not return any time soon, McGregor is predicting a title bout against Gaethje in the summer before he moves up to the welterweight division. Today, we got this:

See you in July 🇮🇪☘️🇺🇸

This is McGregor back in fight mode. A July fight would be at the UFC's Apex facility in Las Vegas, if the promotion got approval from the Nevada State Athletic Commission (by no means a simple task). It would also mean McGregor embarking on a 10-week fight camp in the coming days. 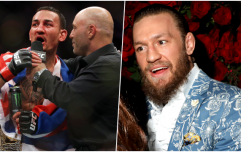 END_OF_DOCUMENT_TOKEN_TO_BE_REPLACED

'Only so long our hands can be held before we must go it solo.'

The Covid-19 curve is flattening in Ireland and McGregor wants to get back to work. He will do it without fans in arenas, if needs be, and he will do so even if he has to go into 14 days of quarantine upon arriving in America. There are ifs and buts all over the place but McGregor the fighter is restless. He has seen another man, in Gaethje, jump to the top of the line for a fight with Nurmagomedov and he can't be held in place no longer. Open up those borders again!

What message would McGregor send by jetting off to resume his fighting career in a country with the highest Covid-19 death toll and with questionable social distancing and testing practices across many of its' states? A mixed one, no doubt, but many fight fans would welcome his return to The Octagon.

Is it essential travel to flew out of Ireland to the USA, with a support team, and sign up to a situation where, as UFC president Dana White has admitted, 'nothing is 100% perfect'? Only on July 20 - Phase 4 of Ireland's roadmap to recovery - is travel beyond a 20 kilometre radius to be permitted.

Simply put, McGregor has been stirred by Gaethje's outstanding performance and wants back in the game.

For some perspective on McGregor, look at Miocic and his situation. The 37-year-old won back his UFC heavyweight title in August 2019 when he avenged his 2018 loss to Daniel Cormier. We are all awaiting the completion of that trilogy but Miocic is channelling his efforts to where he feels they are needed. On March 27, he stated:

'I am focused on being a first responder. Not only did I take an oath [as a paramedic], but I genuinely want to help those in immediate need. I hope we will all be fighting soon and back to our version of normal, but for now let’s make an impact in our communities.'

On May 9, Francis Ngannou brutally knocked out Jairzinho Rozenstruik to vault to the top of the line, behind Miocic and Cormier, in the heavyweight division. He is deserving of another title shot and is frustrated that he may have to wait a while.

That is understandable, but Miocic is not coming back until he gets the all-clear from Ohio Governor Mike DeWine and the health experts in his state.

I want to fight DC. It’s going to happen period. Im going to give my fans what they want to see. My management has been working on dates with UFC. Right now I’m doing what the Governor DeWine is advising and am working as a first responder. I can’t control a global pandemic.

My head coach can’t open his gym by law right now. I don’t hold myself higher than any other person in regards to what I’m allowed to do. Ohio is under orders until May 29th. The second the gym can open, we begin camp. Plain and simple. I have never ducked anyone.

McGregor and Miocic will both go into the UFC's Hall of Fame in years to come. Both have been great champions.

Both have make big impacts to the Covid-19 fight.

However, while Miocic is holding steady, McGregor is wavering. The fighter wants to fight. He does not want anyone holding his hand.


popular
Roy Keane's first impression of Cristiano Ronaldo proved to be very accurate
The SportsJOE 12 o'clock quiz | Day 290
The 14 Irish players Down Under as TG4 come up with the goods once again
Lady Gaga will perform Satanic ritual during Super Bowl halftime show, according to conspiracy theorist
Fernando Torres has got absolutely jacked since retiring from football
The controversial reason Conor McGregor's win over Nate Diaz was not unanimous
QUIZ: Can you name all of these 1990s GAA stars?
You may also like
6 days ago
Dana White teases official Khabib announcement as Georges St-Pierre makes right noises
1 week ago
Conor McGregor's new work-out regime and daily diet ahead of UFC return
2 weeks ago
Co-main event added for UFC 257 as former Bellator champ makes debut
3 weeks ago
"Winner of Dustin and Conor will fight for my belt" - Khabib Nurmagomedov
1 month ago
UFC announces stunning week of Fight Island events, headlined by McGregor vs. Poirier
5 months ago
Rhys McKee fails to slow down UFC's latest hype train at Fight Island 3
Next Page