"I knew I was a killer stepping in here."

Justin Gaethje is the UFC interim champion but his new belt lasted all of five seconds around his waist.

The UFC 249 main event did not disappoint as Gaethje threw several kitchen sinks and a few bath-tubs at Tony Ferguson. 'El Cucuy' had one bright moment at the end of the second round but, overall, it was sheer domination from Gaethje.

The Colorado native did significant damage with leg kicks and left hook connections in the opening rounds and Ferguson was pieced up throughout the night. The amount of shuddering blows Ferguson took without getting knocked out is a credit to his endurance but there can be no arguments with how the fight ended. 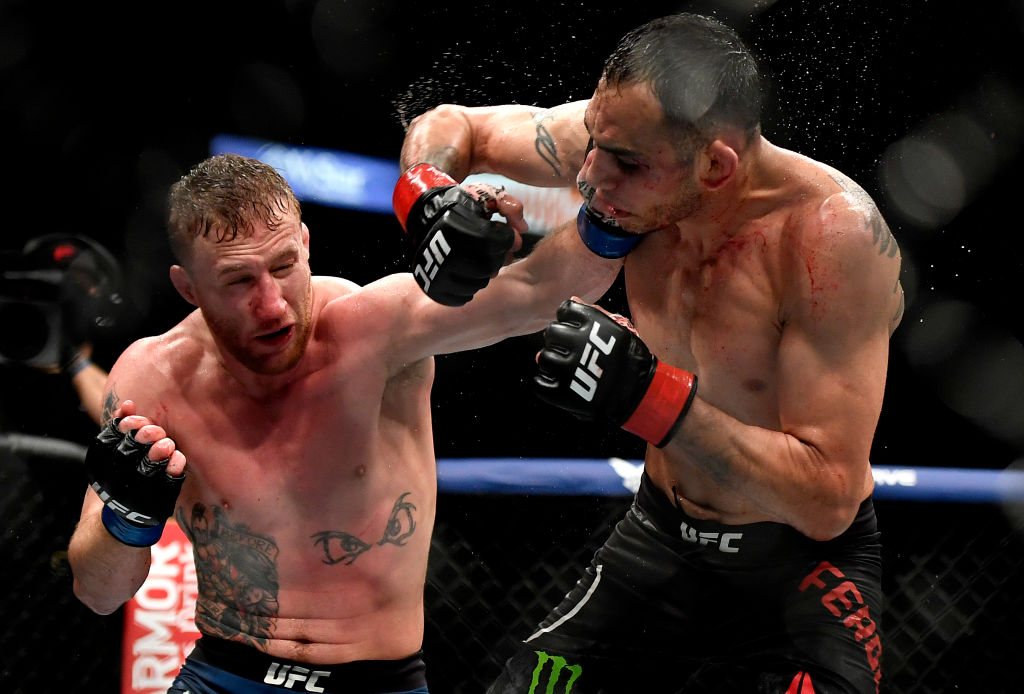 Gaethje had to absorb a punishing uppercut at the end of the second round and may well have been saved by the bell. He came out strong in the next round, though, and the barrage of punches he landed was starting to show on the cut and bruised face of Ferguson.

The No.4 ranked Gaethje put on the fight of his life as he finished stronger than a man renowned for his cardio and experience in championship rounds. The fourth round saw a crunching blow to the temple of Ferguson that wobbled his legs and the fight was ended by referee Herb Dean with just over a minute to go in the fifth round.

Ferguson ate a huge Gaethje punch straight to his face and, with legs unsteady, backed away and shook his head to try rouse himself. He did not raise his hands to defend himself as Gaethje landed another punch and Dean had clearly seen enough. Watching from Dagestan, lightweight champion Khabib Nurmagomedov took notice:

@Justin_Gaethje it was so impressive, congratulations. Very smart fight.

END_OF_DOCUMENT_TOKEN_TO_BE_REPLACED

Following the fight, Gaethje and a stunned Ferguson exchanged words with the victor being called an asshole when he went in to shake hands. Once he had calmed down, Ferguson and Gaethje embraced and left it on better terms.

UFC president Dana White strapped the belt around Gaethje's waist but he quickly whipped it off and later (video below) walk out of The Octagon without his newly won silverware.

.@Justin_Gaethje truly wants no part of that interim belt. His head coach Trevor Wittman had to carry it out of the octagon. 😂#UFC249 | More: https://t.co/N8mXceTwxO pic.twitter.com/MBDvMIHG1h

In his post-fight interview with Joe Rogan, Gaethje explained why he handed his belt away to his team and what is next for him.

"I'll wait for the real one.

"I knew I was a killer stepping in here. I'm good, bro! I've adrenaline coursing through my veins. This is hard work and I've been working since I was four years old."

"I have a world-class coach," he added. "I had to lose to change. You can't fix what's not broken. But once I worked out what was going wrong... I was getting hit too much and I was honestly having too much fun; I was getting complacent and at this level you absolutely cannot do that...

"I'm now happy to represent the United States of America against Dagestan, Russia's best. He's 28-0 and there's no other fight I was right now. I want to fight [him]."

Garthje says he told his team, before the fight, that he was 'willing to die' in The Octagon. He understands why Ferguson would be frustrated with the stoppage but there can be no serious complaints from anyone outside of the Ferguson camp.

While it now seems Ferguson vs. Nurmagomedov [scheduled five times without ever happening] will never happen, fight fans can look forward to Gaethje going up against 'The Eagle' later this year.


popular
In 86 seconds, Patrick Bamford becomes English football's voice of reason
'Make him hurt, make him yours' - How the Springboks ruled the world
Springboks legend Tendai Mtawawira tells us what he really thinks of Ellis Genge
Jose Mourinho is about to step up and become the hero football needs
"We did find him hours later and we made up." - How Flynn and his best friend came to blows in Croke Park
'Beast' Mtawawira is a big fan of Mike Ross' Lions front row
Football's greatest heist has been happening in broad daylight for years
You may also like
2 weeks ago
Exciting UFC 264 card takes shape as McGregor signs up for trilogy
4 weeks ago
Dejan Lovren lasts entire minute in cage fight with UFC legend Mirko Cro Crop
4 weeks ago
From homelessness to the brink of securing a contract with the UFC
1 month ago
UFC announce lightweight title fight after Khabib officially retires
1 month ago
"I'm sorry" - New bantamweight champ in tears as UFC history is made
1 month ago
Conor McGregor bought out of Proper 12 whiskey company
Next Page