Ronaldo 'Jacare' Souza and two of his cornermen have tested positive for Covid-19.

In years to come, there will be an amazing documentary made about the cluster-bomb that is UFC 249. The story of Jacare Souza may only get two or three minutes. That is how crazy this whole situation is.

The ever-changing UFC 249 fight card has lost another bout and this one has come in concerning circumstances.

END_OF_DOCUMENT_TOKEN_TO_BE_REPLACED

On Wednesday, Jacare Souza and his team arrived in Florida ahead of the pay-per-view event. Souza informed officials, upon arrival, that he had been in contact with a family member that was positive for Covid-19. Souza and his team were tested immediately but he still made weight [206lbs] for his middleweight bout.

He also showed up for a face-off in front of a room full of UFC staff, media members and health officials. Wearing gloves, he fist-bumped UFC president Dana White before standing several feet back from Uriah Hall, his intended opponent. 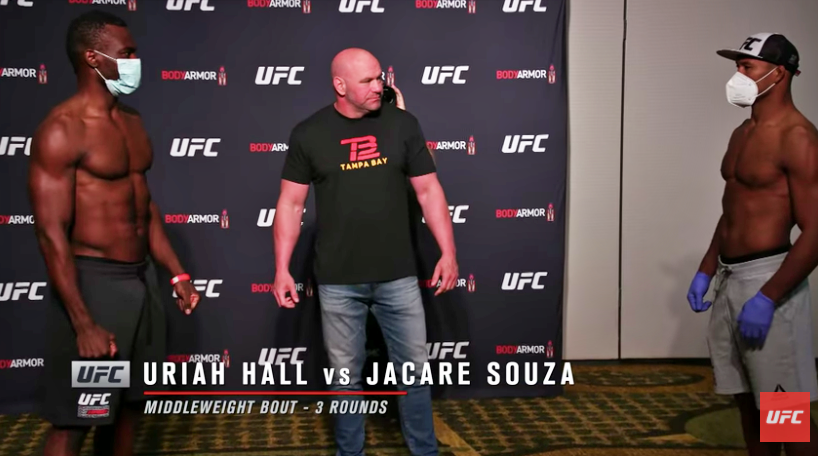 The test results came back and it was confirmed that 'Jacare' and two of his cornermen had all tested positive for Covid-19. A UFC statement, in part, reads:

'As per UFC’s health and safety protocols, all three men have left the host hotel and will be self-isolating off premises, where UFC’s medical team will monitor their conditions remotely and will provide assistance with any necessary treatment.

'There have been no other positive Covid-19 tests reported from the remaining athletes participating in UFC 249. The response to this development is indicative of the effectiveness of the health and safety measures UFC has put in place for this event.'

END_OF_DOCUMENT_TOKEN_TO_BE_REPLACED

The UFC are, then, claiming that a fighter and two of his cornermen flying to Florida only to test positive for Covid-19 as some sort of win. A member of the Florida state commission, who sanctioned this bout, told reporter Adam Hill, 'The system worked."

As for the Brazilian fighter being isolated, the fact that he showed up for his weigh-in and face-off with Hall, and mingled with the likes of Fabricio Werdum (below) and others in between blows that PR spin out of the water.

END_OF_DOCUMENT_TOKEN_TO_BE_REPLACED

For Jacare Souza, one can only hope that he and his cornermen get the best possible care. The fact that he has tested positive for the virus at a time he would have deprived his body of vital water and nutrients, at this time, is extremely worrying. As MMA Fighting's Petesy Carroll told us, last month:

"There’s people lowering their immune systems to virtually nothing to make weights for these fights, AND this pandemic is going down. If they got hit with this situation where they can barely have enough energy to stand up on the scales to register their weight, that can’t be good news. It couldn’t possibly be good news."

"Fight Island? Like, what are we even doing any more? This is mental! I’ve long known that this is an insane industry, but this is taking the piss!"@PetesyCarroll of @MMAfighting on the crazy story behind #UFC249 and why it's still going ahead during a pandemic 😮 pic.twitter.com/rlVp8JgNPo

UFC 249 was supposed to happen in the Barclays Center (sic) in Brooklyn on April 18. Once the Covid-19 pandemic started to impact life in America, it was all set to move to a closed door broadcast from the UFC Apex in Las Vegas. Local authorities nixed that idea and a scrambling UFC lined up Taachie Palace on an Indian reservation in Northern California.

April 18 was still the date and UFC president Dana White was a confident man, until he got a phone call from the brass at ESPN and was told to hold off. At the time, a defiant White told Brett Okamoto:

"It's all good. We're going to get through this. We'll be the first ones back...We'll get this thing squared away, get a date from ESPN, and we'll be back first and we'll get these fights going that everybody wants to see."

White was true to his word and the VyStar Veterans Memorial Arena in Jacksonville, Florida was secured to host a May 9 event that would still be called UFC 249.

The fight card is much, much different from what was originally intended, most notably the main card bout.

It was supposed to be Khabib Nurmagomedov defending his lightweight belt against Tony Ferguson but the Dagestani is back home with his family. Instead, Ferguson will fight for an interim 155lbs belt for the second time in his career against Justin Gaethje.


popular
Javier Hernandez offers to play for Manchester United for free
Mario Balotelli, Luis Suarez, Fernando Torres and why Rio Ferdinand "hated them"
"I remember just hugging this Irish guy" - How one Kiwi rugby star reacted to Ireland's historic series win
"I don’t trust you" - Joey Barton delivers brutal dismissal of Irish defender
Down county football is in tatters, but Conor Laverty is the man to piece it back together
"I'll ask for everyone that comes to the game to wear purple and roots for us" - Pat Fitzgerald
Gatecrashed interviews and chip-shop previews - Wexford GAA's online coverage sets the standard
You may also like
1 month ago
Jorge Masvidal speaks about defending BMF title against Conor McGregor
2 months ago
Dana White reveals who Conor McGregor could fight on UFC return
2 months ago
Your guide to a great weekend of sport and how to stream it all
2 months ago
Conor McGregor says he knows his next UFC opponent and fight date
3 months ago
Commentating cage-side, Daniel Cormier missed the UFC knock-out of the year
3 months ago
Conor McGregor responds to Michael Chandler's callout after UFC 274
Next Page