Conor McGregor was cageside when the unimaginable unfolded.

The reigning UFC featherweight champion was in attendance at Total Extreme Fighting on Saturday to cheer on a number of his SBG teammates.

One such teammate was welterweight Charlie Ward who beat Joao Carvalho on the main card of last weekend's event in the National Stadium.

END_OF_DOCUMENT_TOKEN_TO_BE_REPLACED

The fight will now forever be remembered as one which took the life of a top European prospect as Carvalho passed away in the days following his defeat due to injuries sustained in the bout.

Carvalho was beaten in the third round when the referee called a halt to proceedings following unanswered ground-and-pound from Ward. 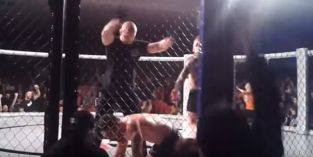 He seemed injured but not seriously so as he made his way from the cage to the dressing room. However his condition quickly worsened and he passed away on Monday night.

McGregor took to Facebook on Tuesday evening to pay tribute to Carvalho, revealing the heartbreak he felt from seeing a fellow professional lose his life doing what he loved.

Terrible news regarding Joao Carvalho.
To see a young man doing what he loves, competing for a chance at a better life, and then to have it taken away is truly heartbreaking.
We are just men and women doing something we love in the hope of a better life for ourselves and our families. Nobody involved in combat sports of any kind wants to see this. It is such a rare occurrence that I don't know how to take this.
I was ringside supporting my teammate, and the fight was so back and forth, that I just can't understand it.

My condolences go out to Joao's family and his team. Their man was a hell of a fighter and will be sorely missed by all.
Combat sport is a crazy game and with the recent incident in boxing and now this in MMA, it is a sad time to be a fighter and a fight fan.
It is easy for those on the outside to criticise our way of living, but for the millions of people around the world who have had their lives, their health, their fitness and their mental strength all changed for the better through combat, this is truly a bitter pill to swallow. We have lost one of us.

I hope we remember Joao as a champion, who pursued his dream doing what he loved, and show him the eternal respect and admiration he deserves.