'Brazil are the champs'.

In the end, as staff tidied up at the T-Mobile Arena after UFC 269, it was left to Dustin Poirier to sum up where he stands in the game.

"I worked hard to get back here for another shot at a world title, and got choked out again."

END_OF_DOCUMENT_TOKEN_TO_BE_REPLACED

'The Diamond' had earned himself a shot at lightweight champion Charles Oliveira after impressive wins over Dan Hooker and Conor McGregor [twice] but he suffered the same main event fate as he did when he faced Khabib Nurmagomedov on 'Fight Island'.

Poirier went into this title fight, in Las Vegas, as the slight favourite and he looked the better of the two men in the first round. Oliveira was landing with knees and kicks to the body, but the power behind Poirier's punches twice had the Brazilian on the mat.

If there is one area where Poirier will look back with regret, it is not pressing down the accelerator in the final 30 seconds of an already frantic first round. 'Do Bronx' was wobbled but held on. In the second round, he would make the Louisiana native pay. 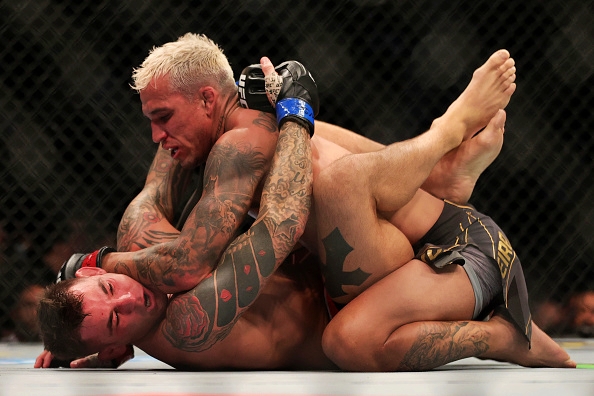 END_OF_DOCUMENT_TOKEN_TO_BE_REPLACED

It could be argued that Poirier won the first round 10-8 but he was most definitely in credit. In the second round, Oliveira could well have staked a solid 10-8 claim after getting the American down and holding him there for over three minutes.

Oliveira mounted Poirier after an ill-advised flip from the challenger, in attempt to roll free of getting his arm tied up. From there, Poirier seemed content to concede the round and take as little damage as possible while not working to get back to his feet. Such futile and energy-sapping attempts in his loss to Nurmagomedov may have been in Poirier's mind.

END_OF_DOCUMENT_TOKEN_TO_BE_REPLACED

Still, he survived to fight another round. Unfortunately for Poirier, he was running out of gas and Oliveira was able to get past his grappling defences. It did not take him long to get Poirier's back and go for a ride, with a rear naked choke locked in.

Poirier knew there was no way out and eventually tapped out to slip to 21-7 in his career while the Brazilian [32-8] made his first successful title defence. Following the fight, both Conor McGregor and Nate Diaz had plenty to say. 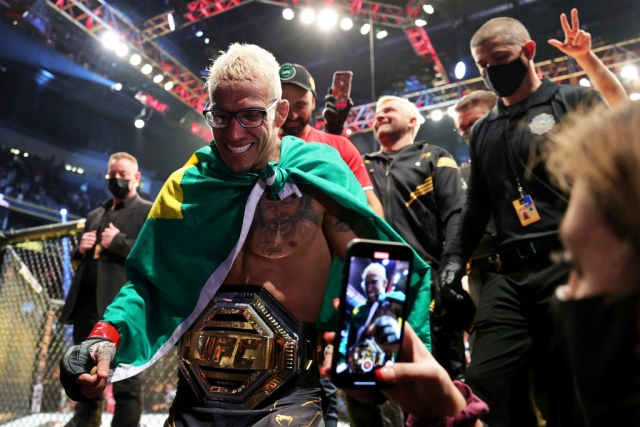 It did not take long for other UFC fighters to go on social media to give their reactions to that main event.

'How Conor let Dustin f**k him up hella times? He sucks,' declared Nate Diaz, referring to those two 2021 wins Poirier had over McGregor. It elicited this response from the Dubliner:

😂😂 you lanky string of piss he got lumped around and got lucky twice. That’s it. Is what it is. Embarrassing night for him alright. That closed guard game. Wtf was that. Wow! Shocking. All good happy Sat night horse yupya it’s proper twelve day tomorrow 12/12. New Paddy’s Day!

'Brazil are the champs. Incredible,' he also wrote, accompanied with pictures from his 2014 tour to Brazil ahead of his fight with José Aldo.

Ever the fight scientist, McGregor was not one bit impressed with Poirier going closed guard and taking his licks in the second round. Of course, the American's loss means any 2022 comeback for McGregor will not involve an immediate title shot.

Currently tipping the scales at a lot more than 155lbs, 'The Notorious' could yet put himself into title contention if he returns next year to square his series with the defeated Poirier.


popular
Roy Keane's issue with Argentina star could rival Graeme Souness and Paul Pogba
'I was so stressed the week before the All-Ireland and I ended up having a panic-attack' - O'Shea and O'Sullivan open up
Roy Keane cracked up Ian Wright and Gary Neville with England team spirit remark
Roy Keane takes moment on TV to pay tribute to his old team in Cork
The nine England World Cup footballers who could have played for Ireland
Lionel Messi makes Gary Neville eat his words after "silk pyjamas" comment
Roy Keane shoots down ITV presenter's 'excuse' for England's draw with USA
You may also like
2 months ago
Hasbulla signs five year deal with UFC 'worth more than many fighters'
2 months ago
UFC fighter Elias Theodorou has died, aged just 34
2 months ago
John Kavanagh and Johnny Walker kicked out of T-Mobile Arena during UFC 279 main card
2 months ago
Conor McGregor took exception to one part of Nate Diaz victory speech
2 months ago
Nate Diaz and Tony Ferguson tossed together for UFC 279 main event after wild 24 hours
3 months ago
Your guide to a huge weekend of sport and how to watch it all
Next Page