"I still can't believe it happened."

The American was up against Amanda Nunes [21-4], who was on an 11-fight winning streak that stretched back six years and included victories over the likes of Ronda Rousey, Miesha Tate and Valentina Shevchenko.

END_OF_DOCUMENT_TOKEN_TO_BE_REPLACED

'The Lioness' walked into The Octagon as reigning featherweight and bantamweight champion, and was putting the latter on the line. She was a 1/10 favourite - Nunes was out at 7/1 in a two-horse race - while Daniel Cormier was talking her up as the greatest female sports star of all time.

In the first round, it looked as though Cormier and the odds makers were on top of matters. Punchy as 'The Venezuelan Vixen' was, Nunes clearly had the bigger frame and more grappling power. She won the first round, but not without eating a couple of Nunes shots and having one of her takedown attempts stuffed. 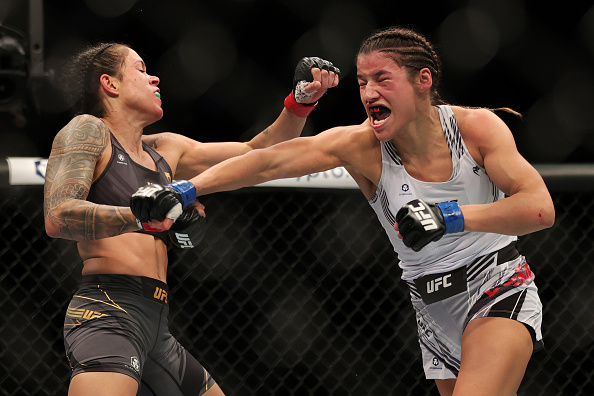 END_OF_DOCUMENT_TOKEN_TO_BE_REPLACED

The second round saw Pena walk forward and start to tag Nunes with lefts and rights. Her left jab was causing the Brazilian issues and she was suddenly looking uncomfortable.

Nunes has 15 wins by knock-outs or stoppages and she was uncorking some big shots, too, but Pena felt she was in now-or-never territory. She took some licks but was doing the bigger damage. Another flurry put Nunes back against the fence and, desperate, the champion tried to grapple again.

Pena got Nunes to ground easily enough and had not fully locked in the rear naked choke, but it was enough to force the tap. Nunes had had enough and relinquished her belt without hanging in there a while longer.

END_OF_DOCUMENT_TOKEN_TO_BE_REPLACED

Over in the ESPN commentary booth, the reaction of commentators Cormier, Joe Rogan and Jon Anik told you all you needed to know. Rogan declared it was, "The greatest upset in the history of this sport." Only Matt Serra's win over Georges St-Pierre and Holm over Rousey could rival that claim.

'Do Bronx' retains his belt and Cody Garbrandt stunned

Cody Garbrandt, the man that dethroned Cruz back in 2016, continues to struggle to match the peak he hit that night. After a losing skid in the 135 lbs division, Garbrandt dropped down to flyweight and took on New Zealand fighter Kai-Kara France. The Kiwi secured a TKO win that surprised many fight fans.

Dustin Poirier, fresh off two wins over Conor McGregor in 2021, faced Charles 'Do Bronx' Oliveira in the UFC 269 main event and was well on top in the first round.

Another slight favourite [like Garbrandt], Poirier then found the going tougher in the second round when he was taken down and opted to go into complete defence mode rather than make the Brazilian work hard.

In the third round, the end was confirmed by a rear naked choke on a standing but flagging Poirier. Up next for Oliveira is a likely 2022 date with Justin Gaethje, while Poirier may face McGregor for a fourth time.


popular
Roy Keane's issue with Argentina star could rival Graeme Souness and Paul Pogba
Roy Keane cracked up Ian Wright and Gary Neville with England team spirit remark
'I was so stressed the week before the All-Ireland and I ended up having a panic-attack' - O'Shea and O'Sullivan open up
Roy Keane takes moment on TV to pay tribute to his old team in Cork
Lionel Messi makes Gary Neville eat his words after "silk pyjamas" comment
The nine England World Cup footballers who could have played for Ireland
Roy Keane shoots down ITV presenter's 'excuse' for England's draw with USA
You may also like
2 months ago
Hasbulla signs five year deal with UFC 'worth more than many fighters'
2 months ago
UFC fighter Elias Theodorou has died, aged just 34
2 months ago
John Kavanagh and Johnny Walker kicked out of T-Mobile Arena during UFC 279 main card
2 months ago
Conor McGregor took exception to one part of Nate Diaz victory speech
2 months ago
Nate Diaz and Tony Ferguson tossed together for UFC 279 main event after wild 24 hours
3 months ago
Your guide to a huge weekend of sport and how to watch it all
Next Page