It was the fight both men wanted and the UFC wanted, but it never took place.

For a fight like that Donald, I’ll fight you.
Congratulations.

McGregor was three months out from his UFC lightweight title loss to Khabib Nurmagomedov and still smarting from that, but looked eager to sign up for a knock with 'Cowboy'.

Cerrone, who now holds the record for most victories in the UFC, suggested a fight near Fourth of July and joked that he would bring a case of Budweiser if McGregor did likewise with his whiskey.

Fans started to get excited about two of the best strikers in the UFC going head-to-head and the Cerrone fight certainly fit into McGregor's claim after his UFC 229 defeat, when he stated:

'I end up beaten fair and square. What can I say? It was a great fight and it was my pleasure.

'I will be back with my confidence high. Fully prepared.

'If it is not the rematch right away, no problem. I will face the next in line.' 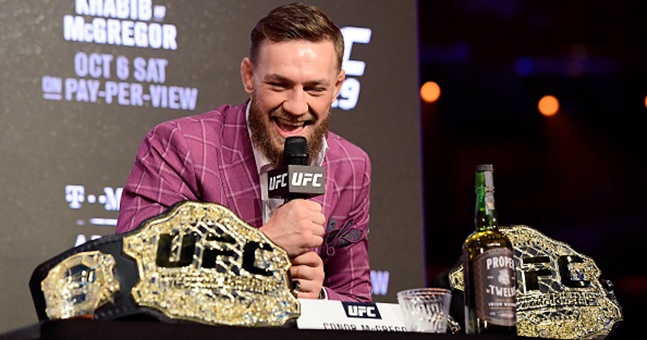 END_OF_DOCUMENT_TOKEN_TO_BE_REPLACED

Cerrone's wins over Mike Perry and Hernandez saw him rise to No.5 in the lightweight rankings. Dustin Poirier was set to face Nurmagomedov when he return from suspension and Tony Ferguson was taking a short break to deal with issues away from the sport.

Cerrone vs. McGregor made a lot of sense but the fight never happened. The issue appeared to be the UFC's reluctance to make the fight a main event in a pay-per-view - thus ensuring bigger pay-days all around - as neither man had a belt to put on the line.

The McGregor camp did not seem willing to share top-billing with a title fight that would, most likely, not have anywhere near the same draw but would eat into the PPV points. Cerrone vs. McGregor was back-burnered and the 36-year-old went on to beat Al Iaquinta [rising to No.4 ranked lightweight] before a doctor stoppage saw him lose to the returning Ferguson on June 8.

In a wide-ranging interview with MMA Junkie Radio, Cerrone said he was "begging" for a do-over with Ferguson and that the UFC were open to the idea. He also opened up on his close call with McGregor and claimed 'The Notorious' did not want to fight him in January 2016, at UFC 196, when Rafael Dos Anjos pulled out of a lightweight title defence.

"That’s been so close so many times. The funny thing is, when [Nate] Diaz fought McGregor, I just fought, and I was flying on that Sunday. The UFC called me and were like, ‘Hey, do you want the McGregor fight?’

“His last fight, we were supposed to do it, and it just deteriorated. I don’t know, he just won’t sign his end of the deal."

Cerrone may force the issue if he does get that rematch with Ferguson and avenge his loss, but McGregor's comeback fight would appear to be in motion already - taking on the winner of Diaz versus Anthony Pettis at Madison Square Garden in November.


popular
"Conor Murray was hung out to dry"
Kilkenny youngster pulls off the no-look hand-pass once more
"Ireland don't ever do anything different and that's the worry" - Mike Tindall
Tyson Fury reveals what happened when he sparred Anthony Joshua
"If Murray is playing that first half for England, he's probably Man of the Match"
Four features of Mason Greenwood's goal vs Watford that shows he is going to the very top
Jacob Stockdale and Johnny Sexton not spared by English press
You may also like
1 week ago
Conor McGregor's next fight narrowed down to two options
1 week ago
Ben Askren on getting the opportunity of a life-time... after he retired
2 weeks ago
Dominick Reyes handles controversial Jon Jones defeat with remarkable grace
1 month ago
Conor McGregor demands apology from ESPN pundit over Cerrone comments
1 month ago
"I saw a guy that looked like he didn't want to be there for some reason"
1 month ago
"Conor's definitely going to be competing before the summer" - John Kavanagh
Next Page