Conor McGregor rematch with Kabib Nurmagomedov not likely until summer of 2020.

One thing we do know - as Floyd Mayweather Jr. often says - is that Conor McGregor's second MMA retirement will soon come to an end.

'The Notorious' announced his retirement from the sport 'known as Mixed Martial Art' earlier this year but, like his 2016 retirement declaration, most took a wait and see approach. UFC president Dana White did not flinch, and wished the Dubliner a good life away from The Octagon.

END_OF_DOCUMENT_TOKEN_TO_BE_REPLACED

McGregor has been very active on social media this year and is constantly posting his reactions to pay-per-view and 'Fight Night' events. He is hungrily lapping up all the action he can, and occasionally setting and accepting challenges (taking on Donald Cerrone, fighting in Brazil, completing the Nate Diaz trilogy).

Asked on the Ariel Helwani MMA Show, if McGregor would fight in 2019, his coach John Kavanagh answered in the affirmative. Kavanagh is seeing the hunger and desire back in his fighter and is excited about what is to come. He commented:

"I think what has come back around is the love of the sport. He loves doing it, he loves training, he loves competing. And legacy, that he’s remembered being one of the best, if not the best ever."

While McGregor is itching for an immediate rematch with lightweight champion Khabib Nurmagomedov, who he lost to at UFC 229, he has stated that he is willing to work his way back to earn that bout. 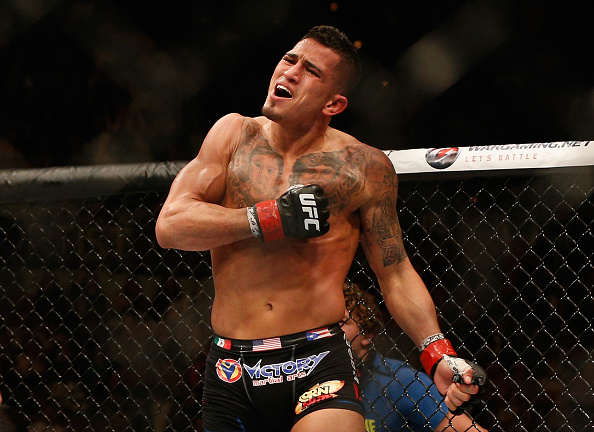 Anthony Pettis reacts to his victory over Gilbert Melendez at UFC 181. (Photo by Josh Hedges/Zuffa LLC via Getty Images)

END_OF_DOCUMENT_TOKEN_TO_BE_REPLACED

Pettis may be 3-2 in his last five fights (22-8 overall) but has picked up either Performance or Fight of the Night bonuses in his last four outings. He either wins impressively or loses in an all-out war. His fight style and his welterweight KO of former title contender Stephen 'Wonderboy' Thompson, in March, got the attention of McGregor and the UFC.

END_OF_DOCUMENT_TOKEN_TO_BE_REPLACED

McGregor and Pettis, it has emerged, were due to be the co main event of a whopper card at Madison Square Garden on July 27.

After the proposed fight against Cerrone fell through, Pettis and Justin Gaethje were lined up as a return fight for McGregor. Pettis' status as a former lightweight champion went in his favour and he was all set for a 'red panty night' at MSG.

Then McGregor busted his hand in a sparring session. Kavanagh explained:

"He had a bit of a knock back with his hand. He hurt his hand a couple of weeks ago but that will pass.

"It was sparring. I set up a spar and it was good but he clipped a guy at the side of his head and damaged his hand. He went to see a really good hand surgeon (had surgery) and he's undergoing therapy now."

Once that fight fell through, the UFC opted to hold off on the New York fight. Instead, UFC 240 will take place at Rogers Place in Edmonton and be headlined by Max Holloway's featherweight title defence against Frankie Edgar.

McGregor could yet face Pettis at MSG but only if 'Showtime' wins his August fight, at UFC 241, against Nate Diaz.