Chris Fields has announced that SBG Swords will be renamed and end all association with the Straight Blast Gym brand.

Fields, who opened SBG Swords alongside Tom King three years ago, has revealed that his successful gym will now be known as 'Team KF'.

After a short stint on the 19th season of The Ultimate Fighter, Fields spent a couple of years fighting under the BAMMA banner before he went 1-1 for KSW.

END_OF_DOCUMENT_TOKEN_TO_BE_REPLACED

'The Housewives' Choice' has transitioned to coaching with aplomb and currently trains several top Irish prospects out of his facility in north Dublin.

"As of today, Myself, Tom King and SBG Swords have ceased all association with, and affiliation to SBG Ireland and SBG international," Fields wrote in a Facebook statement.

"This has been a carefully considered decision for us, and not taken lightly. Between us we have almost 30 years served under the SBG banner. We feel as individuals, and as a team that we are on a different path to the main SBG association. 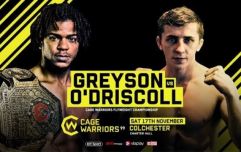 END_OF_DOCUMENT_TOKEN_TO_BE_REPLACED

"We would like to wish all our former team mates the very best, they will always be welcome to train with us. Going forward our team will be known as 'Team KF', and we will continue to strive for excellence in the martial arts, as we have done for the last three years under the name 'SBG Swords'.

"It is an exciting time for us, we have already produced multiple BJJ, K1, and MMA champions, including a Cage Warriors world title holder. We have helped hundreds attain their fitness and martial arts goals, whether they are competitors or not. We have seen complete beginners completely transformed by the disciplines we teach, and we have built a team which is like a family to us. Our aim is to continue to do so in a professional and sustainable way, holding close to the martial arts ideals and principles which guide us."