It was some week for Willie Mullins.

The Clonsutton handler was crowned Ireland's Champion Jumps Trainer for a 12th time in his career after an explosive week for the yard at the Punchestown festival.

Mullins went into the week with a deficit of over €500,000 to Meath trainer Gordon Elliott but five days of racing and 18 wins later and the master saddler would be back on top of the Irish training landscape, overturning Elliott by almost €1 million over the course of the action.

Everything seemed to go according to plan for the 61-year-old and his team this week. Highlights included the return to form of Faugheen who won the Stayers' Hurdle on Thursday's card. Un De Sceaux was an impressive winner on Tuesday while Bells Hill and nephew David Mullins brought home the bacon in the Punchestown Gold Cup. 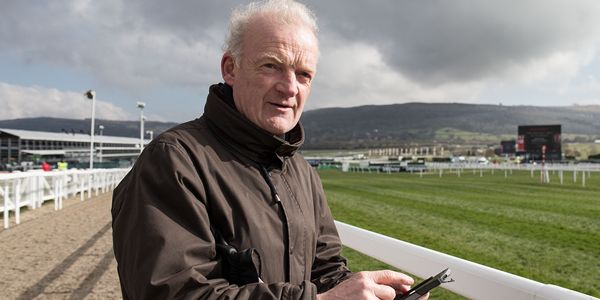 As usual, it was utter domination for the yard in the bumper races while up and coming Benie Des Dieux confirmed on Saturday that her Cheltenham victory over Apples Jade was no fluke as she made it two in a row.

It's easy to say that Mullins' success can be put down to the number of horses at his disposal but the reason he has all of these horses is because he is the best trainer and the owners want their horses to be given the best chance of success. They see the most secure way of doing this as putting their thoroughbreds under the care of the best trainer.

Just like all who succeed in sport, supreme dedication, a whole lot of single mindedness and plenty of drive has got him to where he is today.

Mullins has an insatiable appetite for success and that's what sustains him. With Saturday the last day of the Irish Jumps season before the new one begins on Monday, At The Races presenter Gary O'Brien asked Willie Mullins if he would be taking a break for a while.

To Willie, a holiday involves going to look at horses abroad or going to races around the country. That's the difference.

"We'll see. It has been full on, but racing and going looking at horses in France...We do get little breaks here and there," he said.

He's afraid he'd fall out of touch if he was gone for too long.

"I'm not sure I'm one for long holidays. I find it so hard to take up the thread again when I come back...It was grand when we only had a small amount of horses.

"The whole thing is a trade. Life is a trade...It comes with a lot of hard work, but that's the trade, and if you want to be good at something, you've got to go for what you want."

It's been full-on this season for Willie Mullins - soon time for a holiday? A fascinating insight into the mind of a champion trainer here... pic.twitter.com/yi0lxH1SsJ

That's what it takes.


popular
QUIZ: Name the country these football teams play in
QUIZ: Can you name all of these 1990s GAA stars?
The SportsJOE 12 o'clock quiz | Day 107
SportsJOE 2000s Football Quiz | Round 9
The SportsJOE 12 o'clock quiz | Day 104
Every Premier League club crest, ranked from worst to best
Can you name every English football club that begins with 'W'?
You may also like
2 years ago
Emotional scenes as Nina Carberry and Katie Walsh bow out together
2 years ago
Willie Mullins pulls off €9803/1 shot to stun Gordon Elliott
2 years ago
Paul Townend response to Ruby question gets Punchestown crowd pumped
2 years ago
Treatment of Paul Townend sums up one of the worst parts about horse racing
2 years ago
Irish jockey Paul Townend handed ban for his part in confusingly chaotic finish
2 years ago
Ruby Walsh to miss out on Punchestown because of injury
Next Page