Michael O'Leary has made the poignant gesture of naming the mares' novice hurdle at the Cheltenham festival after the late Jack De Bromhead.

The race, which is ran on the third day of the Cheltenham festival, was previously known as the Ryanair mares' novice hurdle but will now go as the Jack de Bromhead Mares’ Novices’ Hurdle.

De Bromhead (13) passed away in September, after a tragic fall in a point-to-point race at Rossbeigh beach in Kerry. The accident shook Irish racing to the core but ever since, the horse-racing community has rallied around the De Bromhead family, as Jack's father Henry said last month.

"Obviously, we've had a lot of tough weeks," he told Racing TV.

"But the support from our family, friends and this industry, and all over, but especially our industry, has been unbelievable," he added.

🗣 "We've had a pretty tough time. The support from our family, friends & this industry has been unbelievable."

An absolute gentleman. It's fantastic to see you back on a racecourse @HenrydeBromhead - wishing you & your family all the very best ♥️ pic.twitter.com/ui0R1SfV6a 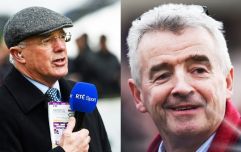 END_OF_DOCUMENT_TOKEN_TO_BE_REPLACED

"Heather, Georgia, Mia and myself have been blown away by it and every bit of support we get, gives us a little bit of strength. And we feel incredibly lucky to have everyone around us."

The young man's memory has been kept alive by many within Irish racing - John 'Shark' Hanlon paid him an emotional tribute last month when he won the American Grand National with Hewick - and O'Leary's kind gesture, which removes Ryanair's name from the race title, is something that De Bromhead greatly appreciates.

He told Racing TV today that he plans to run as many horses as he can in the race to try and win it.

"Michael O'Leary has very kindly said that they are going to name the Mares Novice hurdle the 'Jack de Bromhead Mares Novice Hurdle', which is incredible.

"I'm hoping to do a Willie (Mullins) on it and practically fill the field if at all possible!"

"Michael O’Leary (of sponsors @Ryanair) has very kindly said they are going to name the Mares’ Novices’ Hurdle the Jack de Bromhead Mares Novices’ Hurdle, which is incredible."

What a brilliant gesture ❤️


popular
Kilmacud Crokes to counter Glen's objection over extra players in All-Ireland final
"He's a serious specimen, 6 ft 3 as well, so he's an incredible athlete" - Geaney hails O'Connor's impact
"It's very clear how I felt about it. I had a very definite view on it" - McEntee on Dunboyne's 2005 semi-final saga
January transfer window 2023: Follow the latest updates live in our hub
The two toughest calls in Ireland team to face Wales are in the backline
"He didn't give me that jersey back!" - Johnny Sexton on new rival Jack Crowley
Laura Woods savages Twitter user after he asks her to come over while his wife is at work

You may also like
4 years ago
Michael O'Leary makes surprise announcement to Ryanair passengers after Grand National win
4 years ago
Irish absolutely dominate the Grand National
1 year ago
All roads lead to the Curragh for the weekend we've all been waiting for
1 year ago
The moment it dawned on Willie Mullins that Ruby was finished and things would never be the same
1 year ago
"She's so professional. She'll know everything about every horse and every jockey riding in that race"
1 year ago
The SportsJOE 12 o'clock quiz | Day 330
Next Page