Everyone put everything aside for a second.

Rivalries, competition, money didn't matter. It was just about the health of a fine horse and a legend of a man.

Faugheen came into the Leopardstown Festival as one of two horses pipped to take the Christmas Hurdle. At 3/1, the Willie Mullins trained beauty was an outsider to Apples Jade but only just and the feeling in the pavilion was that the Mullins and Walsh combination could upset the... applecart.

At the second last hurdle, however, with Faugheen the only competitor to the leader, the horse and Walsh went down at the 1.50.

It was a nasty fall and a dangerous one and one which Walsh did well to tuck himself in and avoid the oncoming field behind them. 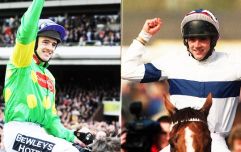 END_OF_DOCUMENT_TOKEN_TO_BE_REPLACED

As it was, Apples Jade coasted to victory with no-one for company but, for a moment, nobody cared about that. Eyes were fixed at the back of the pack and at the second last fence where Walsh and a dazed Faugheen managed to get back to their feet and walk for home.

The best sight of the day - Ruby and Faugheen up safely after their fall... pic.twitter.com/gp6vrh16vm


popular
Justin Gaethje tells Conor McGregor to wait his turn
The SportsJOE 12 o'clock quiz | Day 73
QUIZ: Can you name the Football Italia cult heroes? | Part 2
QUIZ: Correctly identify these World Cup 2014 players from their stickers
The SportsJOE 12 o'clock quiz | Day 72
SportsJOE 2000s Football Quiz | Round 3
"If we had Jurgen Klopp, we would be 10 points clear"
You may also like
1 year ago
Like always, Ted Walsh put it best
1 year ago
Farewell to one of the greatest ever, Ruby Walsh
1 year ago
"I'm there since I was 16 when he offered me a job...there isn't a loyaler man in training"
1 year ago
Ruby's knockers are talking through holes in their pockets
1 year ago
Ruby Walsh pays tribute to his first ever Grade 1 winner Alexander Banquet after horses death
1 year ago
Ruby Walsh struggles to separate three top novice hurdlers from Willie Mullins' camp
Next Page