It's not been a good week for Rich Ricci and Willie Mullins and boy do they know it.

The Leopardstown Christmas Festival has been described as an 'extraordinarily challenging week' by Rich Ricci, whose horses are trained in Ireland by Willie Mullins.

On Thursday, the racing world was rocked by the news of Nichols Canyon's death following a bad fall. The horse came down at the fifth flight of the Squared Financial Christmas Hurdle and sadly had to be put down. 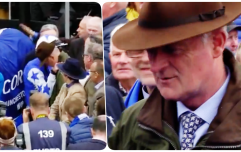 END_OF_DOCUMENT_TOKEN_TO_BE_REPLACED

The very next day, Mullins and Ricci watched on as 11/2 Faugheen was pulled up and dismounted during the Ryanair Hurdle. Faugheen had only lost one race prior to today when it was beaten by former stablemate Nichols Canyon.in the 2015 Morgiana Hurdle at Punchestown.

Faugheen dismounted and being walked back by Paul Townend... pic.twitter.com/6prCxDAwkA

Favourite Faugheen was soundly beaten by winner Mick Jazz in the Ryanair Hurdle. Jockey Paul Townend pulled the horse up before the second last fence after it had fallen completely out of the running.

After giving a positive update on Faugheen's condition, Ricci didn't sugarcoat what was an incredibly tough festival.

"Feels like a long, long winter. Cheltenham's far away."

Ricci gave a brutally honest breakdown of how his horses fared at the festival, which you can see in the video embedded below.

Always worth a few minutes - Rich Ricci reflects on a "long long winter" and today's "disaster" with Faugheen: pic.twitter.com/XfxZUlBpc2


popular
"I remember someone saying, 'This guy's the best of the lot of them. Just wait for him'" - Brian O'Driscoll
Emotional Robbie Savage introduces son Charlie's Man Utd debut while on commentary duty
"I trained with a guy that was born in 2004 the other day. We reckoned Earlsie could be his father!" - Peter O'Mahony
Nigel Owens on most annoying players to referee (three of them are Irish)
The story of the GAA's greatest ever minor
Six All Blacks but no Ireland players in world's top 20 list headed by Antoine Dupont
"I asked one question and lads slagged the arse off me!" - Johnny Sexton on Roy Keane chat
You may also like
2 years ago
Theory as to why Mullins' and Elliott's hotshots struggled and the smaller yards won at Christmas
3 years ago
Ruby Walsh pays tribute to his first ever Grade 1 winner Alexander Banquet after horses death
3 years ago
Willie Mullins plotting a run at the Champion Hurdle with 'special' mare Laurina
3 years ago
Willie Mullins to send strong team to Melbourne Cup in search of glory
3 years ago
Galway Races: Day 6 runners and riders
3 years ago
Galway Races: Day 2 runners and riders
Next Page