Patrick Mullins was won ride of the season after his inspiration victory aboard Rathvinden in the National Hunt Chase at this years Cheltenham Festival.

The McCoy Awards - named after legendary Irish jockey AP McCoy - reflect on the highlights and triumphs of the horse racing season from the famed jockeys, to owners, trainers, right down to the unsung heroes that are the stable staff.

Mullins was riding for his father Willie when he recovered after a mistake at the 11th fence to take home the most unlikeliest of victories.

It was the jockey's fourth win at Cheltenham.

"It's magic to get another winner here." - Patrick Mullins overjoyed to have guided Rathvinden to success in the National Hunt Chase @CheltenhamRaces and advises the 10-year-old is "100 per cent" despite not returning to the winners' enclosure afterwards. #TheFestival pic.twitter.com/Lg2P10pjGZ

Elsewhere at the now annual awards ceremony, Nicky Henderson was named leading trainer, whilst his horse Mighty Bite won horse of the season. The nine-year-old won the King George and Betway Bowl in a brilliant year with his sole defeat coming to Native River in the Gold Cup.

The special outstanding contribution award went to recently retired Andrew Thornton who rode 1,007 winners throughout a 28-year career in the saddle. 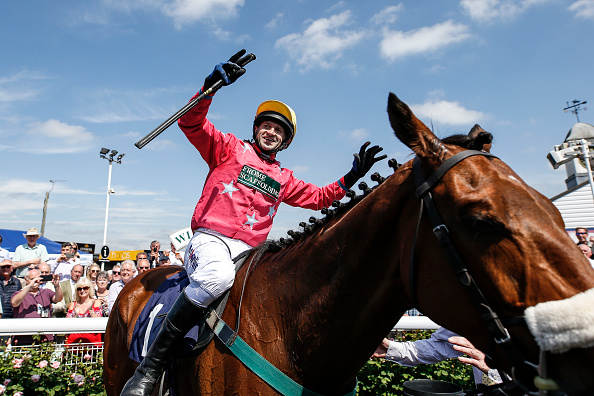 END_OF_DOCUMENT_TOKEN_TO_BE_REPLACED

The stable person of the year award was won by Kate Robinson who is the head girl for Jamie Snowden. She was awarded for her fantastic work ethic throughout the season.

A fantastic night for horse racing, that seen all the stars of the sport come together to celebrate each others achievements.


popular
"Conor Murray was hung out to dry"
Kilkenny youngster pulls off the no-look hand-pass once more
"Ireland don't ever do anything different and that's the worry" - Mike Tindall
Jacob Stockdale and Johnny Sexton not spared by English press
Tyson Fury reveals what happened when he sparred Anthony Joshua
Conor McGregor prepared to risk it all on next fight
Triple Crown wrenched away as England scrape Ireland off their boots
You may also like
11 months ago
Mullins wins champion trainer for seventh time as de Boinville leads the jockeys home
11 months ago
Redemption day for Paul Townend on the horse that "he owed it to"
11 months ago
Great scenes as whole weigh room comes together for Noel Fehily's Guard of Honour
11 months ago
Horse racing world shook to the core as the beautiful Sir Erec has to be put down
11 months ago
The dream double everyone's on from Owning Hill to Craughwell for final day of Cheltenham
11 months ago
"If you don't like racing, go watch Peppa Pig" - Ted Walsh fights horse racing's corner
Next Page