Davy Russell had one man in mind as he celebrated back-to-back wins in the Grand National.

On board Tiger Roll, Russell emulated Red Rum's heroics in the 1970s with consecutive victories in what many consider to be the world's toughest horse race and after thanking Gordon Elliot for the faith shown in him, Russell wanted to dedicate the win to former Cork footballer, Kieran O'Connor, who has been going through a tough time of it lately.

O'Connor, a former All-Ireland winner, continues to battle a rare form of cancer that forced him to have his lower leg amputated in January.

Having undergone surgery and chemotherapy for Ewing's sarcoma in 2018, O'Connor has had to deal with the return of the disease on more than one occasion but the 39-year-old continues to fight.

And there is no doubt that the tribute paid to O'Connor on the brightest stage of horse-racing would have meant the world to the Aghada man. 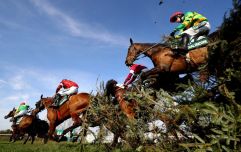 END_OF_DOCUMENT_TOKEN_TO_BE_REPLACED

"There's a guy at home called Kieran O'Connor from Aghada and he's going through an enormous battle in his life," Russell said in his post-race interview.

"And I just want to let him know that we're thinking of him. He played football for Cork and he gave his life to sport.

"He's a real fan of mine and this one's for Kieran."


popular
"I was like, ‘My ear is hanging off my head. Can you not see that?!'"
The SportsJOE 12 o'clock quiz | Day 307
"Hang on lads, there is more to life outside of Dublin" - Connellan is a rebel with a cause
Japanese rugby players living off the classic Irish school lunch for pre-match-meal
QUIZ: How well do you know Manchester United players of the 2010s?
QUIZ: Identify the missing sponsors from these football jerseys
QUIZ: Name all 50 of these 2000s Champions League players – #4
You may also like
1 year ago
Michael O'Leary celebrates Tiger Roll win with free drinks offer on flight back to Dublin
1 year ago
Tiger Roll makes punters' day with back-to-back Grand National victories
3 years ago
WATCH: You may have missed Ruby Walsh's outrageous recovery in the Grand National
3 years ago
WATCH: Hugely exciting finish to Grand National
3 years ago
Conor McGregor brought his unique style to Aintree, and it was something else
3 years ago
WATCH: Using Tom Cruise to pick a winner and other helpful Grand National hints
Next Page