"She spent most of her life breeding and racing horses, right up to her last days."

Not long after news of the passing of Queen Elizabeth II was confirmed, horse-racing legend AP McCoy paid tribute to a woman that loved the sport as deeply as the Antrim native.

'Your Majesty has been an integral part of horse racing,' McCoy stated. 'We will miss your knowledge, passion, sense of humour, charming ease and most of all your irreplaceable presence. RIP Ma’am'

Your Majesty has been an integral part of horse racing.
We will miss your knowledge, passion, sense of humour, charming ease and most of all your irreplaceable presence. RIP Ma’am 🏇🏾 💔 pic.twitter.com/wwObIi4S6d 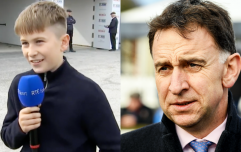 END_OF_DOCUMENT_TOKEN_TO_BE_REPLACED

As mourning for Queen Elizabeth II's passing continues, across the United Kingdom and the Commonwealth, AP McCoy was asked by talkSport to share some memories of a monarch that was passionate about horses and who, in 2013, saw her horse Estimate win the Gold Cup.

"The first time I was due to meet her," McCoy recalled. "I was obviously worried about how it was going to go and what I was going to say. I was thinking of saying as little as possible, in case I said the wrong thing.

"But she did make you feel very at ease in her company. There were other jockeys that would have known her a bit better - guys like Willie Carson, Ryan Moore. One of the most poignant things in the sport was when Ryan won the [2013] Gold Cup, at Royal Ascot. He was walking back down past Her Majesty, in the royal box. Ryan tipping his hat and Her Majesty waving back. It was a very special thing."

McCoy, was was made a knight of the realm not long after his final race, also remembered the moment the Queen shot back a quick-witted remark when he thought it was best to skip out of an Ascot audience.

AP McCoy poses with his wife Chanelle and daughter Eve, and his OBE, which he received from the Queen at Buckingham Palace, in June 2011. (Credit: Stefan Rousseau/PA)

"She made you feel very at ease in her company," AP McCoy recalled, during his talkSport interview.

"I watched two races with her and, obviously, being Irish, I forgot the protocols, which I should have known more about. I went to get up, once, thinking she'd be bored of me sitting beside her. She said, 'Have you got somewhere better to go?' She started smiling at me.

"Obviously, you shouldn't get up off your seat before the Queen does. But it was the way she looked at me and smiled that got me."

McCoy said horse-racing was lucky to have Queen Elizabeth II as the sport was 'her passion and her love'.

"She spent most of her life breeding and racing horses, right up to her last days," he said.

“She made you feel very at ease.”

“I was lucky enough to watch a few races with her. She was an amazing woman.”