Even rarer to see a horse on offer at such high odds so to see a 300/1 winner is barely believable, but that was the story in Leopardstown on Thursday afternoon.

Priced at 250/1 in his last outing in Limerick when finishing 12th out of 14 runners in a moderate field, trainer Luke Comer wouldn't have been overly surprised to see his three-year-old He knows no fear start at the longer odds of 300/1 in Thursday's Irish Stallion Farms EBF Maiden flat race.

The millionaire property developer may have been surprised though, to see his charge bolt up the finishing straight to overtake Jim Bolger's even money favourite Agitare. He knows no fear certainly lived up to his name today.

Ridden by Limerick jockey Chris Hayes, the history maker settled into a better rhythm in Foxrock but a victory looked improbable until the closing stages. With the finishing post nearing, the horse came into his own and eventually collared the long-time leader. 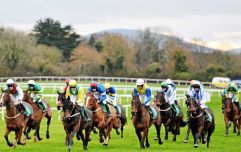 END_OF_DOCUMENT_TOKEN_TO_BE_REPLACED

Previously, the highest priced winner in Ireland was Killahara Castle who won a novice hurdle in Thurles in December 2017. Meanwhile, the various bookmakers reported a substantial interest in the horse, considering the inflated odds.

"These punting heroes have either been struck by divine inspiration or are extremely shrewd form judges who managed to see the positives from the winner’s debut at Limerick – where he was slowly away and made no impression from two furlongs out before trailing home a distant 18 lengths behind Comfort Line."

popular
"My job at Sky is not to be a cheerleader for Rory McIlroy" - Paul McGinley
QUIZ: Can you guess the football shirt sponsors of these classic 90s kits?
"He's found a way to do it. Whether that's good or bad for the game, I don't know"
Sam Bennett's green jersey masterclass got Lance Armstrong talking
QUIZ: Identify the football club from these 12 crests
The SportsJOE 12 o'clock quiz | Day 187
Only old-school fans will get 20/20 in this 1990s footballers quiz | Part 2
You may also like
1 year ago
Farewell to one of the greatest ever, Ruby Walsh
1 year ago
"I'm there since I was 16 when he offered me a job...there isn't a loyaler man in training"
1 year ago
COMPETITION: Win 5 tickets to the Fairyhouse Easter Festival
1 year ago
"Racehorses are treated like royalty from the day they are born" - O'Brien on Grand National outrage
1 year ago
Grand National under review after three horses die during this year's meeting
1 year ago
Michael O'Leary celebrates Tiger Roll win with free drinks offer on flight back to Dublin
Next Page