Behind every good man...

Even after he missed a four-foot putt on the 18th to win The Masters and thoughts that he'd never win his major were rife and the that he just wouldn't be able to see it through was prevalent, in the playoff, his fiancee met him as he went into the club house and she just hit him with a high five.

What are you worried about? We're going to do this. 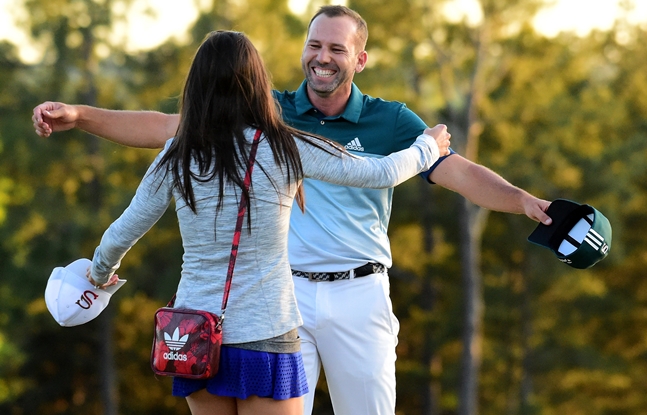 Nothing negative, nothing sympathetic. Just go out and get the job done. I believe in you.

Paul McGinley and Padraig Harrington raved about the role of Angela Akins in Sergio Garcia's career after the tournament.

They said she had a fiestiness and that she was a driving force.

You wouldn't have needed the inside information though to know that their connection was real and powerful. Garcia's partner watched from the side as her fiancee putted for yet another chance to win a major and you could see the angst on her face.

After 21 years and 74 times of asking, he finally did it. And she swung every club with him.

Not even Justin Rose could begrudge the Spaniard afterwards who paid the perfect tribute to Seve Ballesteros, who would've turned 60 on the same day Sergio Garcia became a major champion.

After 21 years & 74 attempts, Sergio Garcia can finally call himself a major champion. Seve would be proud. #TheMasters pic.twitter.com/L0U16tihJX


popular
The SportsJOE 12 o'clock quiz | Day 16
No fear of McCarthy losing a lifetime of fitness
Only a devoted diehard would ever get full marks in our Liverpool quiz
"Am I going to be safe? Am I going to come home healthy?" - Munster doctor joins Covid fight
You won't get top marks in this football stadium quiz
You'll have to be an old-school fan to get 20/20 in this 1990s footballers quiz
Ireland set for dramatically new look as Stephen Kenny takes charge
You may also like
1 year ago
Garcia and Noren hand Phil Mickelson and USA an almighty walloping
1 year ago
Sergio Garcia criticised following controversial Ryder Cup decision
1 year ago
Sergio Garcia and his wife gift Champions League final ticket to 'Cork's biggest Liverpool fan'
2 years ago
WATCH: Defending Masters champion Sergio Garcia dumps FIVE shots into the water
2 years ago
Rory McIlroy has a snap of Padraig Harrington and Sergio Garcia kissing at his wedding
2 years ago
Padraig Harrington and Sergio Garcia settle it once and for all at Rory McIlroy's wedding
Next Page