WATCH: Padraig Harrington's refusal to be thrilled for Sergio Garcia is just another reason to love him

Padraig did not pick Sergio Garcia with his heart.

The pair have a long history.

Even on Sunday morning, with the Spaniard teeing off in the last group alongside Justin Rose, the Dubliner could not pretend to be rooting for his former Major rival.

A spat that began over a rules row with Jose Maria Olazabal had its flames fanned by some epic tussles in 2007 and 2008. Harrington has previously admitted the two will never be bosom buddies.

So what a quirk of fate to find himself in the Sky Sports commentary box on Sunday night as Garcia ended his long wait for a Major with a dramatic play-off victory over Rose.

Spanish magic in the air! 🏆🇪🇸
Brought to you by @TaylorMadeTour. https://t.co/nfFioS4jwj

"I love to see the emotion in that," he said of Garcia's fiancee's reaction. "She knows what it means to him." 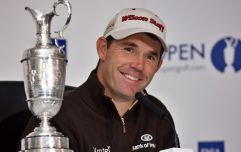 END_OF_DOCUMENT_TOKEN_TO_BE_REPLACED

Harrington may not be a big fan of Garcia, but he will recognise the lengths his rival has gone to to win a first Major at the 74th attempt. At 37, Garcia is just two years older than Harrington was when he made his breakthrough (at Garcia's expense) at the 2007 Open in Carnoustie.

But the 45-year-old stopped short of pretending to be delighted for Garcia and viewers picked up on a definite tone.

Whole lotta love out there for Garcia, apart from Harrington of course.

That bit when Padraig Harrington had to disingenuously remind the world that he was part of the history v Garcia was as cringeworthy as hell pic.twitter.com/EPQPbICLrH

Padraig Harrington looks about the only one none too happy with Garcia's win. No love lost there. #themasters

Harrington, however, is not obligated to be disingenuously happy for someone he does not get along with. It seems he maintained his professionalism when discussing Garcia's victory and that was all that was required.

When everyone in professional sport is now so scared to betray their real emotions, admit to what they are really thinking and dare to have a cut off a peer or opponent, aren't we lucky in Ireland to lay claim to such a unique character?

Harrington is loved for his fascinating, thoughtful take on life. A happy, quirky sort of a fellow who likes to chat to you about his cholesterol and has a cryotherapy chamber in his garage.

Usually smiling, often laughing, yet, when paid to go on TV and talk about golf he cuts out the bullshit and gives an honest opinion.

Yet another reason to cherish the three-time Major winner.


popular
Gatland comments give insight as to why CJ Stander missed Lions call
The Garry Ringrose narrative around the Lions Tour is complete bull
The SportsJOE 12 o'clock quiz | Day 347
"Original Conor McGregor" Nick Diaz recounts heartwrenching story of his girlfriend's suicide
Lions XV that should start the First Test against South Africa
Jake Paul set upon by Floyd Mayweather and security staff after confrontation
The SportsJOE 12 o'clock quiz | Day 346
You may also like
1 year ago
Harrington recalls tale of Mickelson's five-figure tab that he had to pay
1 year ago
Padraig Harrington moves into the lead at the Irish Open
2 years ago
Shane Lowry victory speech after €1,000,000 victory shows where his head's at
2 years ago
Padraig Harrington very honest about biggest Ryder Cup captaincy risk
2 years ago
Irish sporting legends gather for special evening
2 years ago
Padraig Harrington comes agonisingly close to sinking hole in one
Next Page